It was perhaps three or four years ago I noticed a mention on the news page of Duckworks Magazine of a boat called a "Puddle Duck Racer". My initial impression was that it was a ridiculous little box, designed for people who thought that they could not work with tools well enough to build a "real" boat, and I dismissed it from my thoughts and got on with other things.

But it kept popping up, and I soon found out that a PD Racer was not just a particular boat, it is a set of rules developed by "Shorty" Pen with the intention of providing a very simple development class sailing boat that would suit people who did not want to sink a fortune into a boat and which would give them a means of having a lot of fun without breaking the bank. 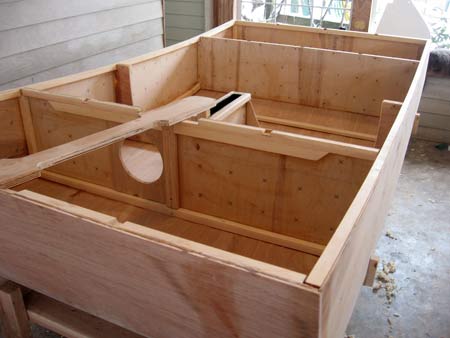 I had a look at the rules, almost anything is allowed as long as the hulls lower part is the same as all the others. That allows a lot of creative variation, but I still was not enthused enough to get involved.

But the durned thing would not go away, on various websites and boating news sites I noted that there were regional and "world" competitions springing up, some quite reputable boatbuilding and sailing people seemed to be getting involved, an internationally well known designer produced plans for a very sophisticated version with a really big rig, and toured the USA to talk to people about it.

Then, Jackie Monies, whos boatbuilder husband had just built a PD Racer, asked me to design one for her. She wanted to build it herself, and to sail it solo, both new experiences for her.

Although she and I live 8000 miles apart we correspond regularly and get along very well and I could not turn down her request, and was happy to produce a design that would really suit her. 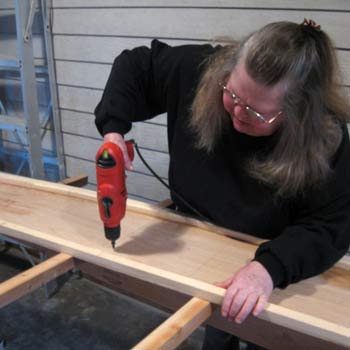 Jackie is an extraordinary flower arranger, a great writer whose work features in Duckworks Magazine on a regular basis, has run all sorts of businesses in the past, has been around boats a lot but was completely new to building , or even sailing her own little craft.

Being gentle about this, she is not as young as she once was, has heath issues that limit her strength and agility and is not as tall as some people, all of which information I teased out of her before beginning the drawings. I needed that information to proportion things so the boat would truly fit her needs.

As the Monie's previous PD Racer was a relatively complex build, I set out to design an "Intermediate" level boat, both from the point of view of building, and sailing. What I have drawn will fit someone from about 10 years old up to an adult male in terms of cockpit space. Even an ex NBA Basketball player could get his legs in there without being too cramped. The Kiwi PD Racer is really well suited to children and women while still allowing Dad to sneak out for a sail on the pretext of "checking it out" and the Sunfish style rig with its easy setup and light sheeting loads is big enough to give good performance without being overwhelming. Note that for the really competitive types there is a "race rig" with a lot more sail area and some features that allow tuning. 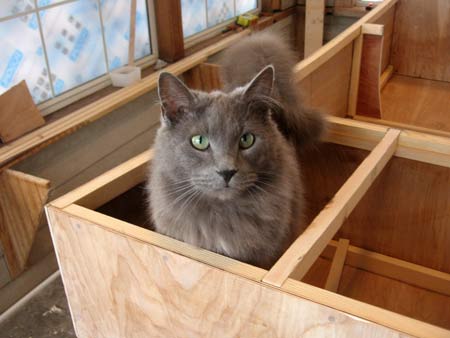 I wanted to give the boxy little boat some graceful curves, after all someone who has just built their first boat will want something that they can be proud of. I wanted to give extra cockpit space and a seat height that would comfortably fit my customers leg length. I aimed to put the crew weight out where it would do the most good, and achieved all of those goals with a cheeky sheerline that was down near the minimum allowed by the rules, and by putting "wingsâ" on in the form of an extension of the deck line out over the sides forming wide seats that overhang the sides in a graceful curve from bow to stern.

The inner edges of the decks are curved as well, adding to the boats good looks. The foredeck covers a big buoyancy tank and there is another one under the after deck giving total buoyancy of about 880 lbs ensuring that the boat can be recovered if an over enthusiastic sailor overdoes things, plus for those who wish to picnic cruise the tanks interiors are accessible through hatches for dry storage. I can imagine a little flock of them skippered by early teens and an adult or two heading away for a weekend camp somewhere with everything stowed away shipshape and Bristol fashion. 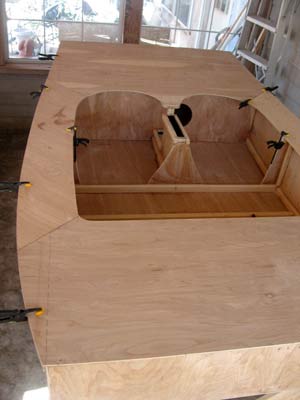 The boats structure is about as simple as it can possibly be, and as cheap as well. For most people this will be about a two weekend build. Cheap materials are fine, hardware store lumber put together with hardware store glue is quite suitable, as is a reasonable grade of utility plywood. Her spars are standard aluminum tube, or the keen woodworker can make wooden ones and I've very successfully used bamboo so there is no need to spend a lot here. The sail can be made from cheap polytarp, sewn up at home from sail material or bought ready made from our favourite on line boat parts shop below.

The fastenings can be cheap off the hardware store shelf stainless steel ones and you can get all the rigging parts, pulleys and ropes from Duckworks Boat Builder's Supply. You can paint her with varnish and hardware store paint but please do make her colourful, some PuddleDuck Racer owners are choosing "Duck" names and painting their boats in the colours of the breed that they've chosen. I'm looking forward to seeing pics of one that is painted up like a Mandarin Duck.

This little boat is all about having fun, do enjoy yourself and lets hear how you fare.
John Welsford
Marine designer 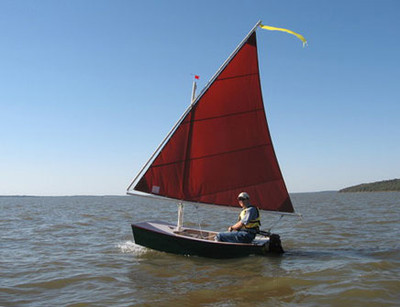