The original "Jane", designed in 1985 sold almost 100 sets of plans showing the strong popularity of the simple, inexpensive multi purpose boat of this size. "Jane's" seem to stay with their owners for a long time suggesting that their virtues outweigh their faults, they are used for all sorts of purposes from duck hunting, through recreational sailing and even a competitive rower who wanted something more seaworthy than a single shell in which to train on choppy days.

"Janette", designed four years and a number of experimental designs later, with the benefit of feedback from "Jane" owners was intended to provide an improvement on the original both in terms of performance and building methods. 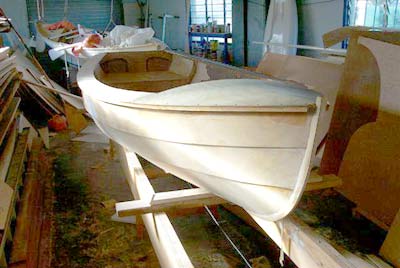 The aim here was to reorient the boat from a rowing boat that would sail, and carry an outboard at a pinch to a sailing boat that would row, and ditto for the eggbeater. She sails well, well enough to get out and enjoy racing in a club dinghy fleet. Surprisingly she rows even better than the earlier boat, particularly when loaded, and the extra beam made her a lot nicer under power.

This boat, like all of the other lapstrake sided boats featured is built upright on a simple jig and is particularly suited to first time builders.

Changes in the construction method make it easy to turn out a really nice job without adding to the cost or the weight. 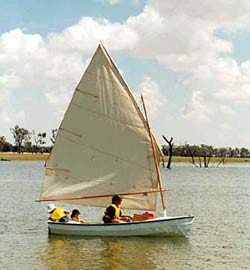 As with many of my customers, John Darling bought a set of plans from me and with regular contact over some years has become a good friend. His "Janette" came after many years of experience in boating. Experience that covered all sorts of craft, the only thing they all had in common was that they were all considerably larger than this one.

John rows his some of the time, sails her regularly and occasionally uses a small motor to take the grandchildren out on the river. Sailing he finds that she is smooth and comfortable but surprisingly quick for her lack of fuss, only outdone by the ability to cover the miles under oars the boats performance has been a revelation to him and those of his friends who have not had a chance to try a light and well proportioned small boat.

For those who want to use a little "eggbeater" to push them out past the point in pursuit of the elusive fish, for those who find peace in exploring a quiet tidal creek under oars and for those who want to get away from it all under sail Janette has worked out to be a friend. Simple, inexpensive and with a real touch of class in her lines. 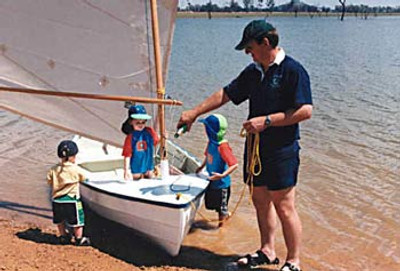