SKU:
BCA-GIORMAX
Availability:
Your plans should arrive via email within 48 hours. The plans are in the form of a PDF file.
Measurement:
Metric

Even if it does not show, the GIORMAX is a classical boat, in the sense that it is a reelaboration of a project of the nineteen-thirties. History can be quite odd at times. The boat may be found in a book - which is now unavailable - published in 1935 by the magazine "La Vela e il Motore", "Practical Guide for the Construction of boats", written by Mario Corsico. He recounts that two boys from Genoa had found a stranded sea-plane float on the beach and to enjoy themselves, they had tried to fit a sail onto it, together with a sort of centreboard. They, surprisingly, discovered that it actually worked and sped on nicely. Through this casual discovery a really new sailing class had been born and was named GIORMAX because the two boys were called George and Max - and had already become widespread before the Second World War.

I do not know, however, if it was the charm of this anecdote or that of an extremely simple and essential design that gave me stimulus to re-design and realize a new GIORMAX during a construction course. Of the original GIORMAX, I have maintained its original plan, modifying the sail (slightly smaller and with a single main sail) and the design of the rudder, a little bit more modern: I have added two small decks around the cockpit to make it wider so as to be able to sit more comfortably, as well as to create a support when one has to lean outboard. The boat was built in four days without excessive effort and by the end of the course, was ready for launching.

When it showed up for the sailing race, its very unusual shape evoked quite a few ironic comments and various comparisons with other objects which have nothing to do with boats: the closest comparison, I believe, is that of an old blotter, used in the past with blotting paper to absorb ink. Comments, however, died out immediately after the excellent performance of the GIORMAX in the water: it was the fastest among the Ten-footers in sailing close to the wind and, with following wind, only a trimaran was able to reach it. While I was not particularly surprised by this performance, because a narrow boat, which by heeling reduces even further its water plane and places the chine in the water for all of its length, was bound to be fast, I was a little somewhat dubious about comfort and stability which, on the contrary, turned out to be much greater than I had expected. Whether sitting in the cockpit or on the side of the boat, it is quite comfortable and stability is more than sufficient: to capsize you need to make a very serious mistake in manoeuvring. The sail surface is that of the FARO' with an increased main sail surface, up to 7 sq. m. A main sail larger by a square meter, to the rating limit, would give it more speed, but obviously, makes the boat more difficult to control with strong winds. The boat is very easy to control and thanks to its limited weight, it is also easy to handle on the shore. 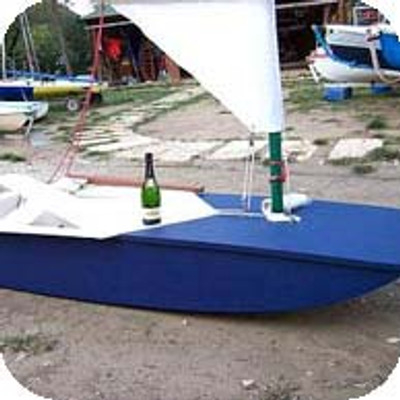