Stow-A-WayÂ® eliminates the need for all sail ties, is easy and convenient to use and self-stows under the boom until needed.

Stow-A-WayÂ® requires only simple tools and about 20 minutes to install, is made of high-quality materials and is an excellent value costing less than a set of sail ties.

In the summer of 2008, I singlehanded a Tanzer 22 up the Maine Coast. I started the journey in Pott's Harbor, near Brunswick, and ended in Rockland; a journey totalling some 75 nautical miles I covered over 6 days of what turned out to be very mixed weather. 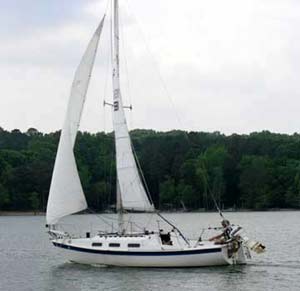 I had just purchased the boat and wanted to get to know her and to move her to a mooring I owned in Penobscot Bay. I figured a multiday trip was just the ticket to accomplish these goals.

Toward the end of my first day, moving along briskly at just under 6 knots, I turned sharply north into the wind to drop sail and motor into my harbor for the night. The winds were strong, approximately 25 knots, a wind strong enough to make maneuvering tricky. Rocky ledges surrounded me, leaving me little room for mistakes.

As I motored into an especially narrow passage my sail flapped loosely in the cockpit. I simply could not safely afford the time away from motor and helm to secure it with my sail ties. Emerging into the harbor, I encountered little reduction in wind, and a dense field of lobster pots!

Non-coastal sailors will need to understand that getting the motor's prop tangled in a "pot warp" or piece of rope securing the lobster buoy to the pot, would likely end up in a stalled engine, and uncontrolled drift of the boat. If the prop could not be cleared quickly, the boat would be dashed by wind and waves onto nearby ledges. This was not part of my plan.

The lobster pot field had to be navigated very precisely. In the mouth of the harbor, the wind lessened slightly, but changed direction and began to curl into my cockpit from a different angle and catch under my sail. A sharp gust of wind lifted the sail and deposited it over my head! I pawed the sail off of my head, knocking my glasses off in the process. I blurrily finished navigating that field without further incident, but wondered then and there what might be a way to better manage a dropped sail so this situation would not be repeated. 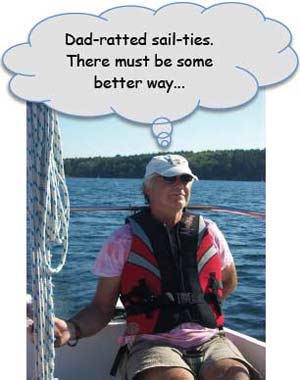 Months later, the idea for the Stow-A-Way came to me when I was thinking back on that situation and wondering what I could or should have done differently. I recognized that I was reluctant to leave the helm in such strong wind to get my sail ties from where they were stowed below, or to tie the sail down.

In retrospect, I realized I should have stopped and dropped sail farther out, and motored a longer distance. Still, I thought it should be possible to handle the kind of situation I'd found myself in more efficiently- by not being dependent on sail ties.

My thoughts went to those sail ties, and what I did not like about them. I determined that my three biggest objections to sail ties were:

So what would work better? What would I want a new idea or invention to do? 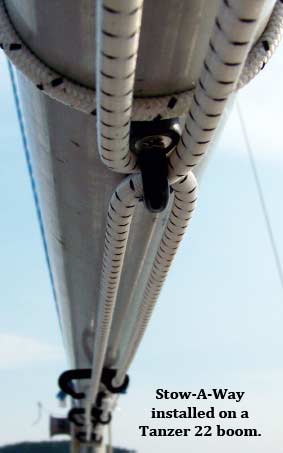 I decided a new system had to do and not do the following:

One night, as sometimes happens, my sleeping mind came up with an idea. Over the next few weeks I mulled it over, sketched the idea out, revised, sketched, scratched my head and figured out a design. I gathered materials to develop a prototype.

My first installation was on a 14' Flying Tern Sailboat. I spent about 25 minutes installing the system, a little longer than I thought it should take, but with no conflicts between existing sail hardware and the new system.

To my delight, the first and informal test of my system worked absolutely perfectly! The time had come to name my invention; I christened the system the Stow-A-Way since it self-stows out of the way when not needed.

I gathered more materials and installed the Stow-A-Way on another of my boats. Installation on the second boat, my Tanzer 22, went smoothly and also without any conflicts with location or function of existing sail hardware. I tracked installation time for the system on the Tanzer at 18 minutes. I was improving! Now it was time to really test the invention and see if it was what I'd hoped. 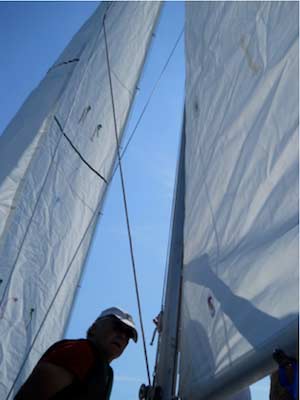 On a Saturday in July of 2012, I tested the Stow-A-Way on the Tanzer 22. I repeated the same tests as already described. Times for each system on each sailboat were averaged, and efficiency calculated, as presented in the chart below.

There was one additional consideration to the sail tie tests.I began the sail tie tests with the sail ties in hand as opposed to stowed. This means that the actual time locating and readying the ties for use was not included in the results, and certainly would have added to the time of the that system's tests if included.

After all the tests I informally thought about what makes this system "work" for me.

Mostly, I love the fact that the Stow-A-Way is right there, ready to be used. I also love the fact that the system is simple and foolproof. I love that it is faster than sail ties. I thought back to the sail flapping over my head day in Maine and honestly asked myself; "Does the Stow-A-Way solve the problem I experienced that day?" When I consider how very little time I would have had to leave the helm to secure the mainsail the answer is a resounding YES! 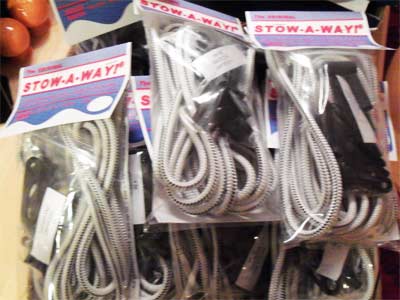 Both of my boats have been equipped with a Stow-A-Way for a year. I still enjoy and appreciate the system.

In that intervening year I have located bulk manufacturers and suppliers for all the Stow-A-Way components. I have assembled the system into a simple kit that can be installed on just about any boat (maximum boom length of 14') in 20 minutes or less. Each kit contains everything you need to have a Stow-A-Way of your own. All components are marine grade, and will provide years of service. Finally, to meet the "sailor on a budget" criteria, the suggested retail price is under $25.00!

I have decided to offer the Stow-A-Way to you, the sailing fraternity, for your boats. It simply adds to the pleasure of sailing.