Alaska is modeled on the working Whitehall skiffs that were commonly used in the 19th and early 20th centuries to carry people and goods about the great harbours of the American east and west coasts. They were remarkably seaworthy small craft and were capable of venturing far offshore in all manner of weather to solicit trade for local businesses from incoming sailing ships. Their highly developed lines allowed them to carry considerable weight, without unduly burdening their hulls, and were almost equally as fast heavily loaded as empty.

These characteristics for load carrying ability, seaworthiness and speed make them great candidates for coastal cruising under oar and sail today. This was borne out in the John Gardner designed 17â Boston Whitehall skiff that my wife, Sanda, and I built and cruised along the B.C. coast. It was a fine sea boat, though we did find it somewhat lacking in the features that we thought would make it a really good beach cruiser.

A three-month cruise around the Gulf of Georgia in the summer of 1979 ultimately inspired us to sum up our experiences and develop them into what was to become Alaska. As the name implies, that was to be the destination for this new design. 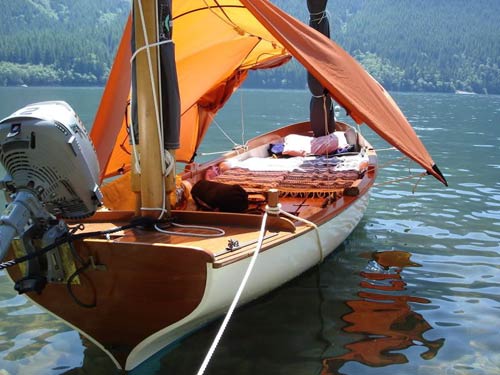 What we found we wanted most was to be able to sleep aboard. Setting up and breaking camp took a lot of time and cut into passage-making considerably. Sleeping on the sole was out of the question for a crew of two, so we came up with the idea of folding, longitudinal benches that were supported by the thwarts, giving us a platform over 4â wide and 7â long with plenty of stowage space underneath. As it turned out, many builders have found this platform doubles equally well as a âdeckâ and makes it easy to move about the boat unhindered by clutter to tend sails, handle anchoring gear, etc.

We still wanted the option to camp ashore and to that end we worked out a two-point, endless-loop mooring system that would allow us to haul the boat out from rocky shores to avoid grounding out on the tide. We also wanted a relatively wide, flat keel that would hold the boat upright in the event of a grounding or when beached to load and unload gear.

Positive built-in flotation was also a priority in case we ever got rolled. Along with plenty of tie-down points to hold everything in place, we felt we might stand a pretty good chance at self-rescue should it ever come to that. Twin bilge pumps mounted on the aft thwart webs, port and starboard, and accessible from outside the boat were specified to help us clear out as much water as possible before climbing back onboard. A fully swamped boat can be very unstable and can easily capsize over again unless well cleared of water. As it has turned out, an Alaska takes on very little water when knocked down and remains surprisingly stable with what water is left trapped aboardâ a happy, but unexpected, coincidence. 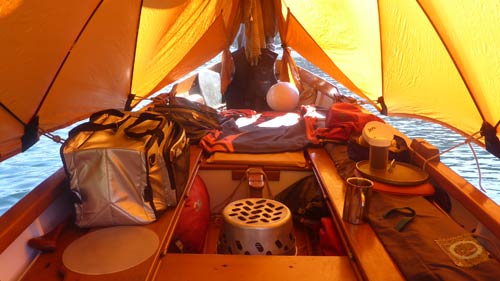 Traditionally, Whitehall skiffs were primarily rowing boats, though many also carried small spritsails for use when the wind was free and generally did not fit centreboards. Paying customers, it seems, werenât too keen on sailing close hauled at wide angles toward their

destination when it was possible to row directly to it instead. Hence, rowing ability was paramount and the hulls evolved accordingly â lean and long on the waterline. This, of course, is detrimental to windward ability under sail and so was neglected for the most part. Our Gardner 17-footer was classic in this regard, but we were determined to give the new design a bigger rig and substantially more lateral plane in the way of a deep dagger board to enhance its performance hard on the wind.

A split âcat ketchâ rig was chosen for its ability to set a large amount of sail in light conditions and still be able to be reduced quickly for heavier winds. The spars are unstayed and can be shifted around in three different configurations to take advantage of the varying sail combinations offered by the sail plan. In practice, this has worked out well and Alaskaâs have shown themselves to be well balanced and very capable under sail, though it does take a deft hand on the tiller when things pipe up. 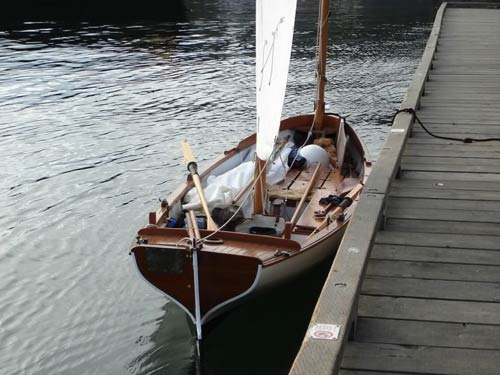 One of the other advantages of a split rig, is that a large boom tent can be setup between the spars. Definitely something that is desirable on our coast where rain is an issue. Small decks, with coamings, fore and aft, were added to deflect any rainwater coming off the tent to keep the crew as dry and snug as possible. Inclement weather can then be waited out quite comfortably without the need to set up camp ashore.

We wanted very much to create a boat that was very handy and capable of voyaging far and wide along the Pacific Northwest coast. One that could be as self-sufficient as possible and could look after its crew when venturing off into remote, sparsely populated areas.

We also wanted to create a boat that was relatively easy to build. The Whitehall-type has a very shapely hull and can present some real challenges in construction. Strip-planking seemed the best choice to accomplish this and, in fact, has turned out well. Many Alaskaâs have been successfully completed by first-time builders.

For anyone wanting to try their hand at building an Alaska, detailed computer-generated drawings and full-size patterns are available, along with a descriptive text outlining the building process.

Please note: At this time, plans are only available in Imperial Measurement (feet and inches).