Fred Rebell (1886-1968) was a lone sailor and adventurer - he fled from Latvia to Germany to avoid conscription, stowed away on a Sydney-bound ship and after marrying/divorcing and working in Australia, tried to emigrate to the US but was refused a visa. He eventually bought an 18' open boat, named her Elaine after a girl who spurned his attentions and then undertook the first recorded single handed west-east passage across the Pacific to San Pedro harbour in California, arriving in January 1933. Without legal papers he was deported to Latvia but eventually ended his days as a carpenter and lay-preacher. You can read of his adventures at sea, using a home-made sextant in his book 'Escape to the Sea'.

No drawings of Elaine survive - only a few grainy black and white photos. I was asked to use the photos as best I could to draw up a dayboat to match the original Elaine as close as possible, and this design is the result. She had quite a flat sheer line, relatively hard bilges and a large open cockpit so, very much like some of the old regatta boats. As a half-decker with a good freeboard she will be a dry boat that you sit-in rather than on and which has generous amounts of stowage.

Construction uses the modern clinker ply method but plans could be drawn up for a strip plank version and she could take a small cuddy or even a cabin.

She uses a steel centreplate and an outboard can be hung on the transom or mounted in a well. 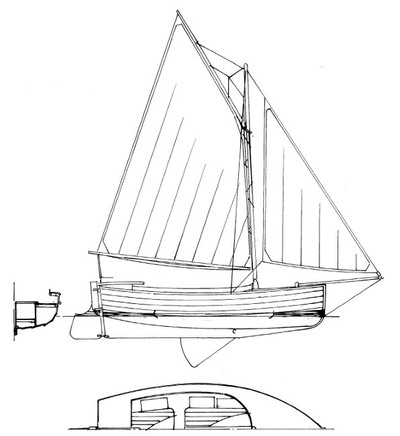