The original Melonseed skiffs were gunning boats for hunting around the New Jersey area of North America. Unlike some of the other gunning skiffs and sneak boxes which were definitely inland boats, the Melonseeds were for use in more open and estuary waters which, around New Jersey, could be quite choppy.
With their fine lines they were quick boats and easily sailed with their single boomed sprit rigs which were unstayed. They were often carvel built (clinker sometimes producing too much noise for gunning) with a lovely low profile and beautifully raked transom with wineglass aft sections. The hull has a narrow flat bottom plank which is flat from the bottom of the bow to around 2/3rds of the length aft where it swings up in a graceful curve to the transom which narrows as it goes. this makes fitting the centreboard case very easy.
The Selway Fisher version uses a pivoted plywood centreboard for convenience in shallow waters rather than the daggerboard that the original boats often had and has a strip planked hull.
She is a very beautiful and unusual hull type - an excellent project for the builder wanting an unusual design to construct - there are many photos on the web of the traditional type. 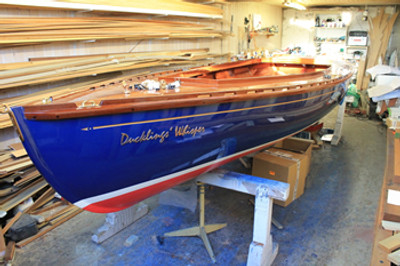