Sundowner was drawn up in response to an enquiry from a customer who's dream it was to build a small ocean going cruiser with his own hands, then sail it on his dream voyage which included such interesting places as Hawaii, Cape Horn and Fremantle. 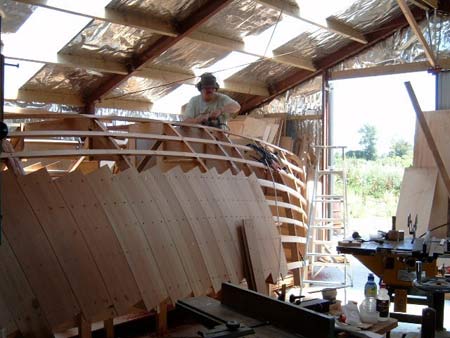 Not hard to do this simple cold mounded structure is intended for first timebuilders.

A voyage like this imposes some really interesting criteria on the design, for example an amateur building a boat has to consider a balance between time and funds, and the size of the boat. A big comfortable boat will take several years to complete, time that could be spent sailing a smaller boat, and funding that project is an issue that can take years to save up for.

Another consideration is the ability to carry stores. To live in acceptable comfort is a reasonable expectation, and if a crew of two are considering a voyage where the longest single leg between provisioning stops might be 3000 miles (as in an Atlantic crossing) then the consumable stores list could weigh in at ¾ ton or more. That's not just food and water, it includes toothpaste, stove fuel, tissue paper and engine fuel, laundry powder and all of the other incidentals that life aboard requires when away for months at a time. That's a lot of weight, and a small boat cannot carry a load like that so the voyage length does to a large extent dictate the minimum size of the boat. 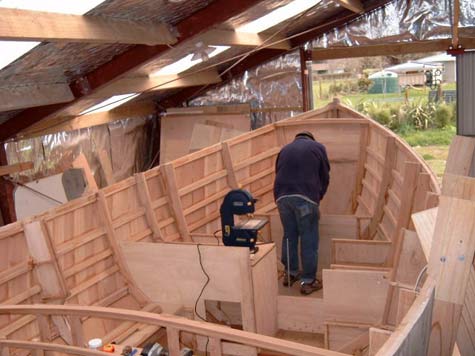 Although not a big boat there is a huge amount of space inside Sundowner There is room for a double berth up forward and a head opposite the galley.

Given that a bigger boat will take too long to build, and a small boat can't carry enough stores, its up to the designer to figure out where both of the criteria are satisfied, and then, only then, do questions of seaworthiness, structure and strength, style and rig come into the equation.

In this case the client and myself the designer were designing for a singlehanded voyage that included a non-stop leg of over 6000 miles so some serious stores needed to be carried. 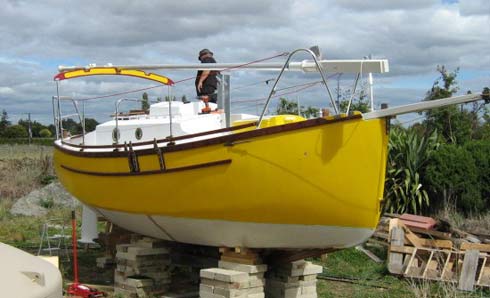 Sitting up all brave in her new paint and almost ready to have the mast stoodup for the first time.

Sundowner ended up at 6.5m, (21 ft 4in) by 2.8m (9 ft 2in) on deck. She's a big boat for this length, full headroom, settees that make up two very comfortable bunks in the main cabin, space for a double bunk forward so she can accommodate four adults if that's the aim, space for a portable or marine heads, chart table, a huge amount of storage and an inboard diesel with 60 litres (16 US gallons) of diesel tankage. The prototype had over 200 paperback books, 300 litres (80 US gals) of water and almost 6 months worth of meals on board in addition to all of the other stores and maintenance equipment for a long long while at sea.

Out on deck there is a superbly sheltered cockpit with a lot of lockers including a dedicated paint and fuel locker that drains directly overboard for safety, a cargo hold under the after end of the cockpit floor, and huge scuppers out through the transom. The side decks are wide enough to take size 10 feet across the beam and the foredeck is positively huge for a small boat. 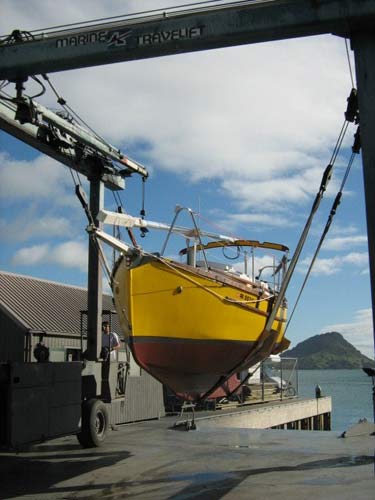 Sitting in the travelift on the way to the water she looks both slippery and sturdy.

She is styled like a classic working fishing boat. There is a long keel for directional stability and to reduce her roll rate, a big transom hung rudder with a "wing" on the tip to reduce pitching and increase efficiency, a hugely strong gaff rig with its mast in a tabernacle which allows the mast to be dropped or raised without a crane, the cutter rig with its two headsails and topsail above the big main makes her a champion ghoster in light airs and she can be shortened right down almost to storm canvas without having to change sails which makes shorthanded sailing much easier.

Note that the skipper reports that during the prototypes maiden voyage he was able to have the boat self steer in a wide variety of conditions, and on most courses without the use of the windvane, and that at one point he'd been sailing for 36 hours without touching the tiller. 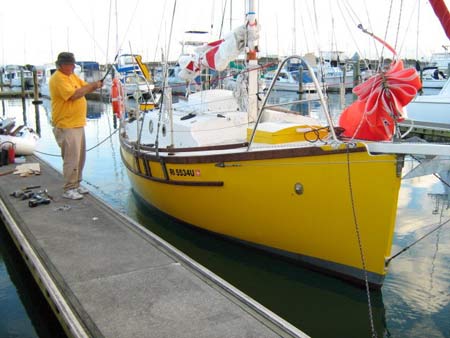 Finishing off the rigging On this boat it was all hand spliced which saved hundreds of dollars.

Designed for the amateur builder, everything in the boat is designed to be built at home with normal hand tools using materials from the local lumberyard There is nothing here that is difficult, or beyond an average handyman. The same goes for repair and maintenance, its quite conceivable that every tool used to build the boat be carried on board when away voyaging. My personal philosophy for long range cruisers is - if you cant fix it with whats on board, or do without it, then it does not come on board - and this really easy with a boat like this.

The prototype took a couple of years of part time work for the inexperienced builder to complete, and I had great fun helping with the build on occasions, going to the launching, helping to set up the enormously strong rig and fit out the deck and running gear, then sailed with the skipper for a month to assist with the sea trials. 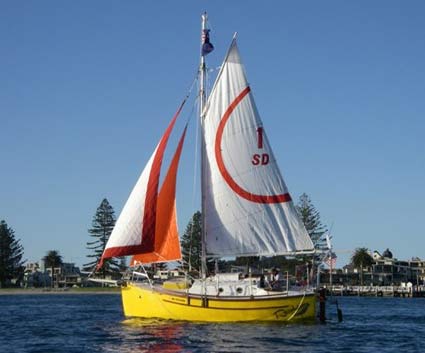 The very first sail The anchor rope lead back to the cockpit and some adjustment needed to the sails but shes looking good.

She proved to be faster than expected, not spectacular you understand, but she feels very good to sail, tacks and steers very positively, points well and is very well balanced requiring little effort to keep her on course. We did not expect to keep with the local coastal racers but over a few hours she was often still with the lighter and faster boats. Her motion though was much more comfortable than those lightweights, and the first real sail outside the harbour showed this up very well.

The coast off Tauranga is shallow for many miles out, and there is nothing out there to break the waves that set up on the sandy bottom not far under the surface. It had been blowing gale force onshore for days, kicking up a monster swell from the south east, then the wind swung west south west 20 /25 knots plus making a 2 metre high chop running at right angles to the established 3 m high storm surge. The combination made for an irregular and uncomfortable mix which had some waves combine to be a good 5 m high. 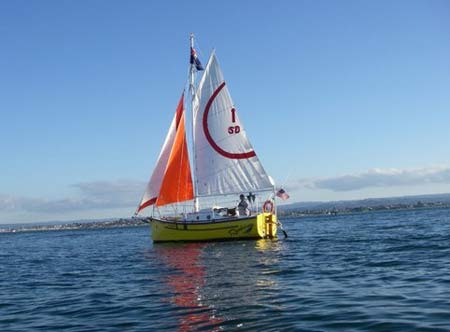 It was almost flat calm A tiny breeze But when I tried to catch her inthe inflatable dinghy I needed full throttle on the outboard motor She wasmoving much faster than she seemed.

As a first real sail it was a great test of a new design, we sailed out to Mayor Island about 25 miles offshore, and carried on past until the island was very small on the horizon behind, then turned to port and headed across to the coast well north of the harbour entrance and sailed back down the coast. We covered about 80 miles over 24 hours, experimenting with the rig and the steering all the way and found that the boat could be made to self steer on most points of sail with just a shock cord on the tiller, we tried her hove to under different combinations of sail, and gosh that made a difference to the motion. We found that we could cook down below when the conditions outside were a lot like the inside of a washing machine and that the cockpit was a very secure and comfortable place for us to weather the storm.

Our little cutter proved to be a very capable sea boat, easy to handle, not at all sensitive to trim or conditions, easy to work, faster than most would expect and very capable of making long voyages in reasonable comfort. We took turns on watch in the deep and comfortable cockpit, did a couple of changes of sail finding that the combination of wide side decks and cutter rig made for an easily worked rig, off watch we slept surprisingly comfortably in the big bunks down below considering the horrific conditions, and although it was not the sort of weather I'd choose to go out in, it was a very good experience to look back on. We had a good time and the while the little boats first sunset was a very black and threatening one her first dawn at sea was just beautiful. 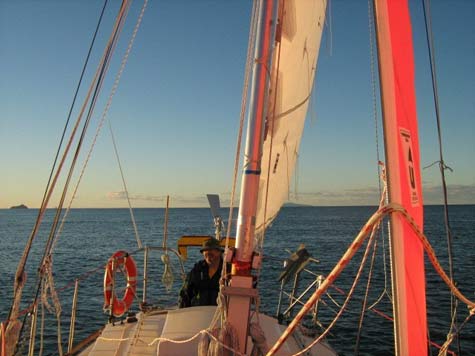 Sailing at sunset It doesnt get much better than this.

Before I handed over to the owner the boat had about 500 miles on her, we sailed in every condition from flat calm to full storm. She was designed from first principles to be as self sufficient as possible, to sail long distances shorthanded, to survive Southern Ocean or North Atlantic storms and to look after her crew in comfort and safety. I did over 500 miles in the prototype during her sea trials and I'm as pleased with this design as I have ever been with anything I've drawn. 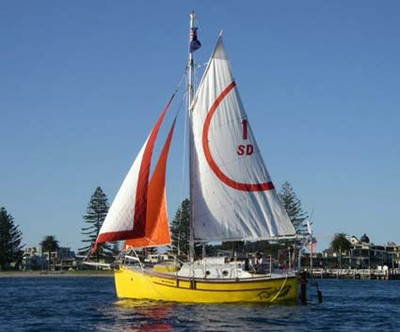