The 18ft STRIKE is a trimaran design that uses a 16ft beach cat as the outriggers/amas and rig. The main hull is plywood and has a dory shape that is extremely easy to build. The cabin top is removable to convert a fast day sailing boat that sits six in dry comfort into a simple pocket cruiser that sleeps two.

The prototype Strike was launched in Canada on September 2nd 2009. Unfortunately, as is often the case in BC in the summer, winds for the first sail were very light. Even so the boat sailed really well and was extremely comfortable to sail. We look forward to some more wind, when I will make a more detailed report of the sailing performance, but in the meantime here are some photos.

The Strike is available as both an open deck boat, as we have built, and also one with a removable cuddy for a basic one/two person micro cruiser. 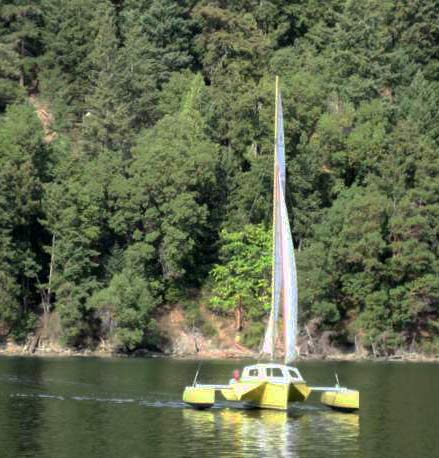 One reason why I build prototypes is to refine the design. Even before launching our Strike I decided to raise the wing bottoms slightly and to lower the front windscreen. Even with the raised wing and lowered windscreen there will still be plenty of room below with the cuddy fitted.

The gps showed a maximum speed of 6.2 knots, yet as you can see there was hardly any wind. A very comfortable and easy boat to sail. Steers itself, yet tacks fast.

I am experimenting with a boomless mainsail, early days yet. On the prototype the outriggers are cut down 18ft singlehander hulls. The mainsail a cut down 18sqm and the mast a shortened Tornado mast. The jib is also from a Tornado, but 38 years old. So, as you can see, with a bit of time spent modifying things, you can use parts from most beach cats.

My third sail was on a breezy day. In fact the first time this year that we saw white horses in our normal sailing area. The wind was certainly well over 20 knots at times. The local multihull association (the BCMS) was having a regatta so I decided to sail along with the fleet for a while. An indication of the wind strength was that I was the only boat unreefed (because I can't - yet), a Farrier 32 was double reefed.

Unfortunately, after the first sequence I was rather along way from shore, but you should be able to see that I did sail at a steady 10 knots for much of the time (11.2 was the highest speed on the gps). In the last shot I appear from the right. The other boats on the video are a F24, a F32, a Banks 35, a Horstman 38 and Bad Kitty, one of the fastest 35ft cats in the world. 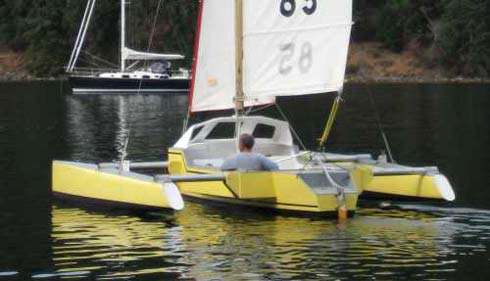 Strike sailing at around 9 knots

I found that the boomless mainsail is horrible. (Something I had actually already learnt when sailing a Dart 18). For as soon as you ease the mainsheet the sail goes baggy and you can no longer point and tacking is hard. So for next season I will fit the boom and also get a better mainsail.

I also decided that for sensible cruising (as opposed to just burning around in the bay) I need a set of reef points, while a furling jib would also be nice. Other than that the boat sailed great! And it could definitely be pushed hard without problems.

A few days later we sailed Strike again. This time in company with a Lock Crowther designed Buccaneer 33 trimaran, which has always been acknowledged as a fast design. As you can see from the video below, we sailed at a similar speed. OK the Buccaneer was faster, but also it was 15ft longer and, despite the small jib, had a 49ft mast (the Strike has a 26ft mast)

The Strike is not intended as a fast, "hairy" boat to sail. Instead it is for those who may be new to boatbuilding and multihulls and want to start with a quick and easy project. And it is also for those who already have a beach cat and enjoy it, but who also want to be able to take the whole family out on gentle sails.

The windscreen serves several purposes. Obviously it helps keep the crew dry and is also used as the front of the removable cabin. But it also means the boom is well above head height, important for family crews. Furthermore, a beach cat mast and mast foot can be used without modification. If a windscreen is not used then a complicated extension would be needed to raise the boom, and unfortunately such an extension would be in the most loaded mast area.

It is a "sit in" boat, rather than a "sit on" boat, which is more comfortable and a lot more reassuring for nervous crews and for those with young children. Even on that windy sail I sailed without foul weather gear and no spray came on board, despite the fact that we have yet to fit the trampolines.

As the photos and videos show it is extremely relaxing to sit back and steer (cockpit cushions are the next "must get" items on the shopping list - along with drink holders). The cockpit is a very sociable area and easily sits four adults, it is possible to squeeze in six. In comparison a "sit on" boat is tiring after only a few minutes.

However, if you want to blast around then the crew can sit on the outrigger and really power the boat up. So a telescopic tiller extension is ideal. (We use a 3ft-6ft extending brush handle, much cheaper than the real thing) 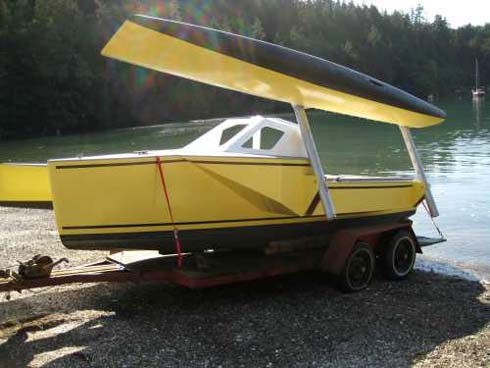 For trailering the outrigger hulls fold up. Because they are beach cat hulls they are very light (around 40kgs, under 100lbs) and so it is easy to do. The centre of gravity is still relatively low so no problems when driving. Trailering beam is under 8ft.

The flat hull bottom makes it very easy to launch and retrieve, while no trailer chocks are needed. We use Tucanu's flat bed trailer, so it is oversize for the Strike. Because of the flat bottom a strop fore and aft is sufficient to hold the hull securely on the trailer. I have found that much of the time spent assembling a trailable boat is un-tieing all the bits. So the fewer strops the better. 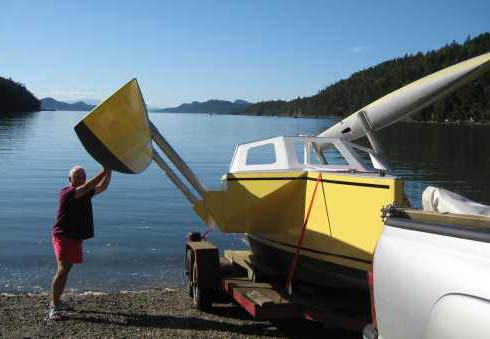 The Strike is very easy to build with a stitch and glue hard chine hull and flat panel ply decks. Plans and building manual are now available and selling well (over 16 sold by mid July 2010) 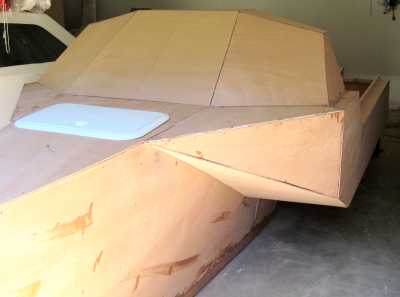 The photo above shows the prototype after 75 hours work. It took
about 150 hours to finish the first boat prior to final painting. 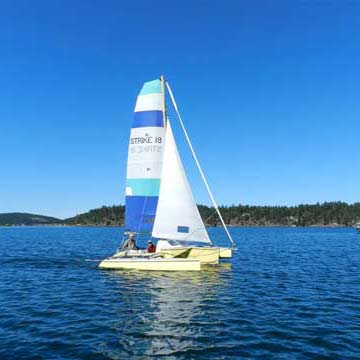 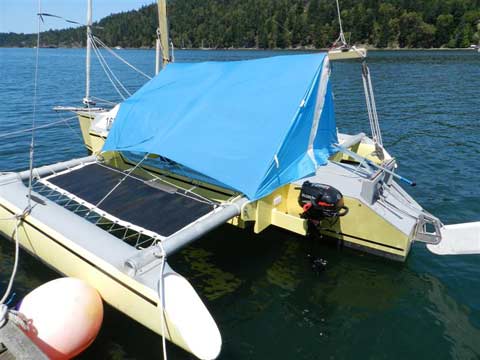 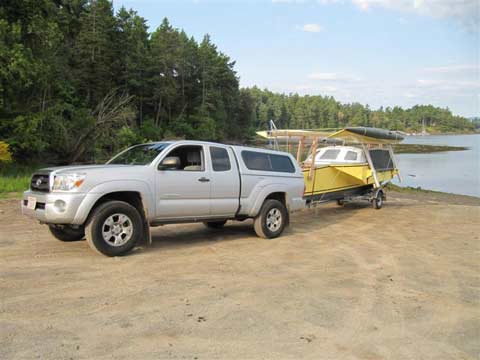 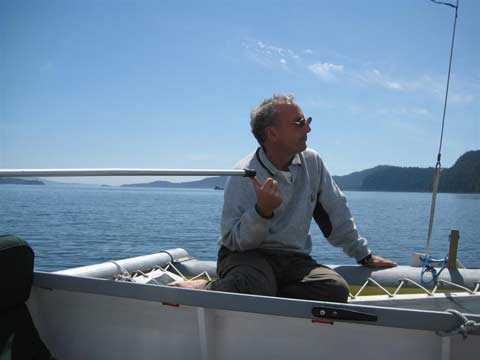