• Distill a Mini Transat down to its essentials to create a trailerable pocket-racer raid boat.
• Keep boat affordable to build and race
• Make boat quick to rig and launch from trailer
• Keep weight as low as possible by using water ballast and lightweight construction
• Incorporate as many of the latest Mini-Transat features as possible without adding too much cost or complexity
• Make it fun for sailors of all levels
• Make it as safe as possible and seaworthy enough for something like the Race to Alaska
• Include comfortable cruising cabin interior for two crew.

• Distill a Mini Transat down to its essentials to create a trailerable pocket-racer raid boat.
• Keep boat affordable to build and race
• Make boat quick to rig and launch from trailer
• Keep weight as low as possible by using water ballast and lightweight construction
• Incorporate as many of the latest Mini-Transat features as possible with adding too much cost or complexity
• Make it fun for sailors of all levels
• Make it as safe as possible and seaworthy enough for something like the Race to Alaska
• Include comfortable cruising cabin interior for two crew. 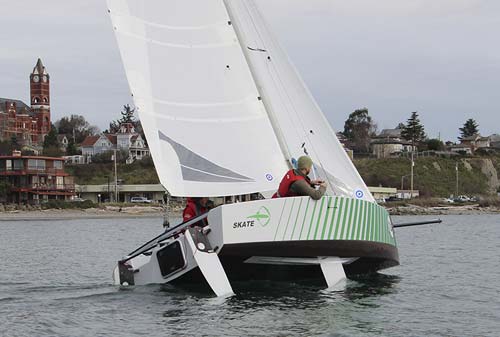 Skate Update: As most of you know, the prototype was completed and we've been out sailing it. The verdict? Skate is incredible! Easy to sail, responsive, weatherly, and fast. We think she’s on her way to becoming a well-known adventure-racer/ performance beach cruiser.

In fact we even had a chance to test her beach-cruising capabilities recently when Brandon and I took our daughters for an overnight. We sailed over to Marrowstone Island, pulled Skate up the beach on inflatable rollers, and made camp. The huge cockpit handled the four of us easily under sail and the kids loved crawling around in the big cabin and watching the water through the transom’s escape-hatch glass. (The boat has since been cruised with four sleeping aboard for a week cruising in Canada)

One of the last boxes we wanted to tick in our prototyping process was a capsize and recovery test, and we did that a few weeks ago. Once again Skate did everything we'd hoped. With her beam and water ballast she was difficult to knock over (even with two crew hiked-to-leeward with sails sheeted tight in light air, she was hard to knock down—the sailors failed several times then eventually put her on her side.) Once knocked down she sat incredibly high—water was nowhere near the cockpit or companionway—and one crewmember was able to right the boat by grabbing the centerboard.

And finally, when we knocked her over again and tried to intentionally turn her 180º, she resisted mightily. Because of the sealed Hobie 16 wing mast, Skate was nearly impossible to invert. It took several minutes of both crewmembers walking on the mast from the tip toward the hull, pulling on shrouds as they went, to force the boat upside down. And once inverted, two crewmembers pulling on the righting line were able to right Skate easily. As I say, everything we could have hoped for.

And just recently we had world-class sail designer Bob Pattison from Neil Pryde Sails out for a second time to go over Skate's rig and controls, so those systems are also pretty well dialed. We're trying to do this right so that we create a solid class sailboat right out of the gate, with perfect off-the-shelf sails available.

We just recently added a so-called Code Zero or screacher sail on a furler. The Code Zero—which is sort of a cross between a genoa and asymmetrical spinnaker—is easy to manage and appropriate to use over a huge range, making it a perfect fit for Skate 15 adventures. 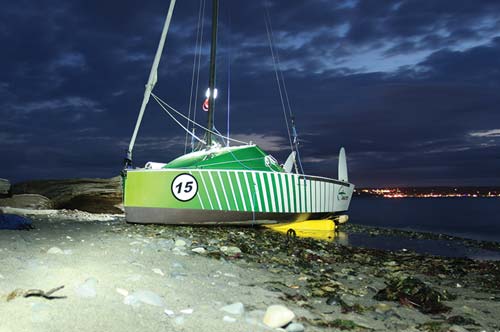 The kits are made of foam core, not plywood.

While the prototype was constructed in plywood, during the building process Brandon and crew kept seeing ways the assembly could have been simpler and resulted in an even better boat if foam core had been used instead. Consider that in addition to sheets of foam core being lighter than plywood, they can also be stiffer, so the foam kit wouldn't require much of the support structure and extra parts required on the plywood version.

Foam-kit builders will receive a stack of sheets (Divinycell) with pieces cutout by CNC nested in place. The builders will simply glass one or both sides of the panel (depending on schedule) and begin typical stitch-and-glue style construction, eventually glassing the one or both sides again after assembly. The result is a completely composite boat with no wood aboard. This has several advantages: Lighter weight of course, but it also eliminates concerns about rot, delamination, and maintenance. And maybe most importantly, composite boats maintain vastly better resale values than plywood boats.

The foam kits sell for $3500. Even if you estimate spending three times that or more to build your own Skate, how much would have to pay for a new similar production boat? $25k? $35k? This is one of the few boat projects we've been around where it seems like a builder could actually make money along the way.

We think this design and the foam-core construction represent the future of this sort of project. In keeping with this modern approach, we've taken the Skate 15's builder manual on-line through a special on-line manual service. There are many advantages:

1. This open-source approach allows builders to add their own comments and ask questions within the manual format.

2. As developers we can update the manual in real-time with builders seeing each update and not wondering if they've got the latest version.

3. We can add photos, drawings and videos as needed.

Builders can read manual on computer, laptops, iPads, phone and other devices, but they can also save individual pages as PDFs for printing.

Kit order includes all CNC cut foam panels. $3500. Shipping varies. If you're not planning to pickup kit we'll contact you with a freight quote once we have an estimate. Off-the-shelf sails and complete epoxy & fiberglass cloth and rigging kits will be available shortly. 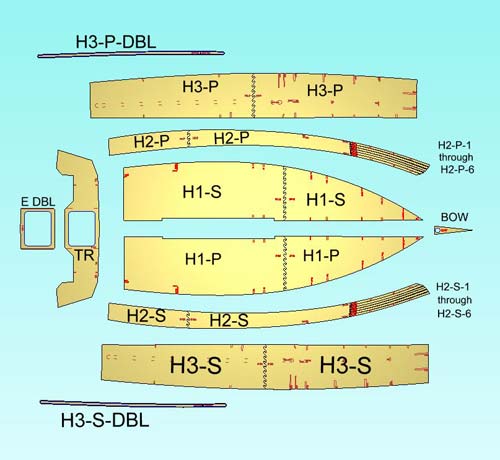 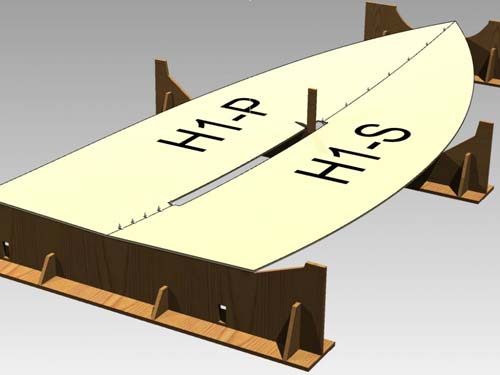 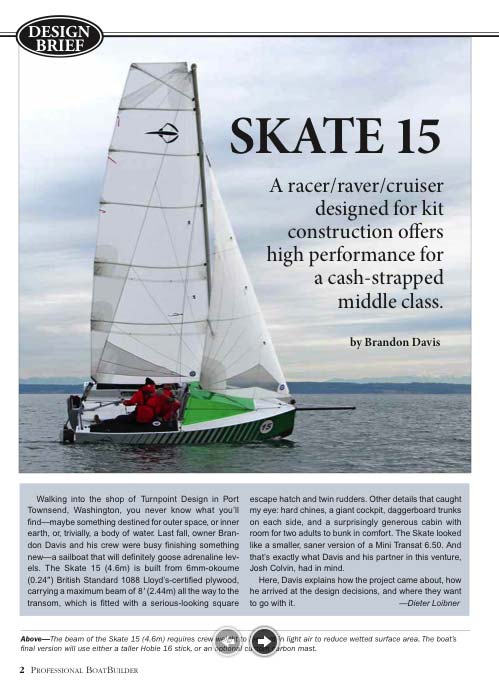 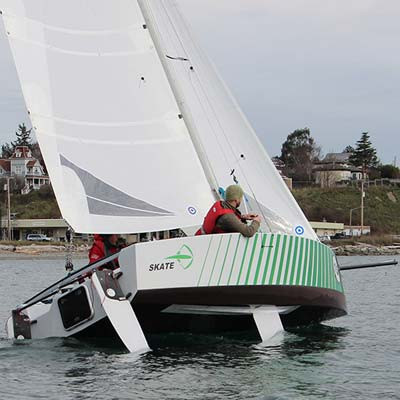