Seil is a large pram designed initially for a group of yachtsmen from Nantes area, eager to have a sail and oar boat suited to navigation on the Loire, and rivers in general. Seil is in fact the name of a backwater, now filled up, of the Loire river.

A pram is a boat of Scandinavian origin, characterised by a clinker construction and especially by a small fore transom. The fore rocking facilitates embarking on the strand.
The full fore and aft hull lines make Seil a very seaworthy and stable boat. This shape of hull obstructs a little in a choppy sea but it is ultimately a boat as well adapted to the sea as with sheltered water.
Of moderated width, Seil is easily pulled under oars and is a very good compromise between sail and oars abilities.

Seil has the capacity to take on board a numerous crew (up to 6), which makes it a boat well adapted to the family or collective uses: sailing schools, youth organisations or other associations.
It is rigged with a high aspect standing lug sail. When tacking, you just have to pass the sheet from one side to the other. The crew can lower the mast, for example to get under a bridge.
Seil is provided with two rowing thwarts. With a crew of young people or children, it is possible to row with two oarsmen per thwart.

Seil has been produced in grp by “Canotage de France”, a boat-builder which is now out of business. In fact, grp Seils are largely dominants today, thanks to the large efforts of François Lelièvre (Canotage de France) who made Seil being the “sail and oar boat” having the most dynamic owner association. Seil was thus victorious in 2004 of the raid “Sail Caledonia” in Scotland.

Seil is particularly easy to build in its wooden version, which has also the advantage of a greater lightness. Indeed, the planks (9 mm plywood) are very few and do not have any twist. They naturally take place on a building frame made up in particular of transverse bulkheads and both transoms.

Seil 18 is the last version, including many improvements: side seats to accommodate a large crew, ability to raise the floorboards on the rowing thwarts allowing to spend a night under a tent, aft locker able to stow a small outboard motor. She is proposed for home-builders with a very detailed building handbook to put its realisation at the range of any a little persevering home builder. You may find very beneficial to supplement it with the choice of full-scale patterns drawn on polyester film of the bulkheads, transoms, planks, rudder, etc, to order to the architect. 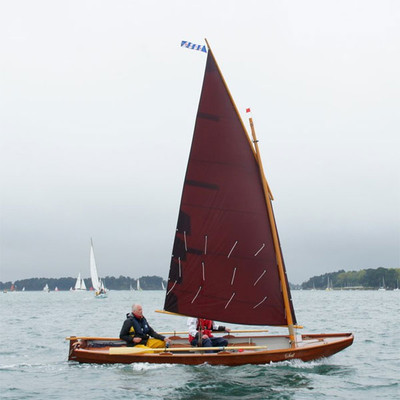