SKU:
JM-SEALCOVE
Availability:
not available at will call
measurement:
imperial

This boat is an "instant" version of the "8-Foot Seal Cove Skiff" shown on Plate 34 in Howard Chapelle's classic book BOATBUILDING. Such a great book, although it predates the building methods that this modern version uses. I recommend that you get the book if you can. If you turn to Plate 34 you might notice that the "8-Foot" skiff is really 12' long! Sometimes there is an explanation for a discrepancy like that such as with traditional dories that are listed by their length on the bottom and not by overall length, but in this case I'll bet it is a goof. Next you will see that Chapelle's skiff had a slanted internal transom towards the bow so there is an open well with a wheelbarrow wheel up there, and then wheelbarrow handles on the stern! So the boat is self trailering, sort of. Finally Chapelle shows a small downwind-only sailing rig. I did not want to copy those features but you might get the book and try them.

Pierre Guimond built this beautiful prototype up in Quebec within a few weeks of the plans release. Then he had to wait for the Canadian ice to melt to get these photos. Here is one of Pierre solo showing proper trim with the stem just out of the water.: 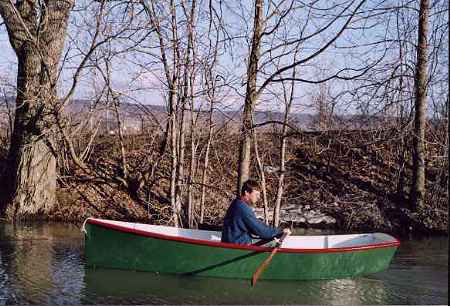 The shape of these hulls is totally traditional and effective. The sides have constant flare almost the entire length except at the bow. There we find a great twist to the planks to get a stem that is nearly vertical. Flare is nearly always good in a rowing boat because it gives both the narrow bottom that benefits speed and the wide top that gives good spread for the row locks plus extra room and stability. The vertical stem gives more waterline length which implies more speed. The bottom treatment has the stem always just out of the water to encourage the boat to go over the water instead of plowing through it. Then the bottom runs straight back and down to a point just past the midsection and then it turns quickly up to well above the the normal waterline. The idea is to load a boat like this with extra weight in the stern to keep the stem just clear of the water. The result is a lot of capacity. Seal Cove can easily take two full sized men which is unusual for a 12' rowing skiff.

Here is another photo of Pierre's boat with wife and dogs aboard. Note that the stem is still out of the water. The stern has sunk under the passenger's weight but not enough to immerse the flat transom. Another loading scheme might be with both dogs up front, or with the rower in the front seat. 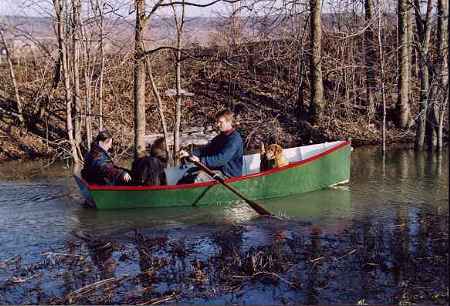 The hull is made with three sheets of 1/4" plywood instead of the 5/8" cedar boards and heavy oak framing of the original. I kept the internal chine logs of the original design and I think this is the only boat I've ever drawn that has them. But if I were to build one of these for myself I would probably use taped seams or maybe external chine logs instead. 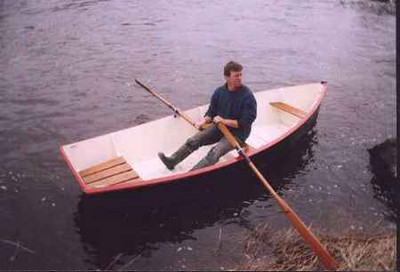