I had never heard of proGrabit extractors until Bob Booth told me about them and recommended that we carry them. He was restoring an old Bluejay sailboat and used these tools a lot (see Bob's tutorial below).

The tools come in several different sizes for different size screws and bolts, so I called Alden Corp and after talking to the nice folks there, was advised that since boat builders generally deal with screws no smaller than #4 or larger than #10, the two piece kit would be just right. 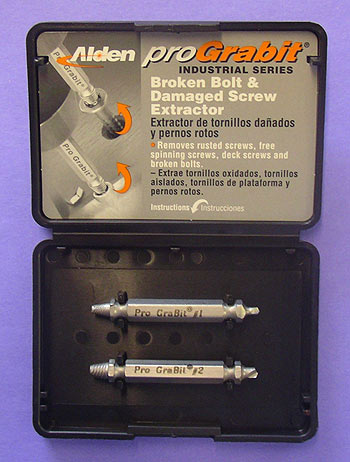 This is the company's illustration from their brochure: 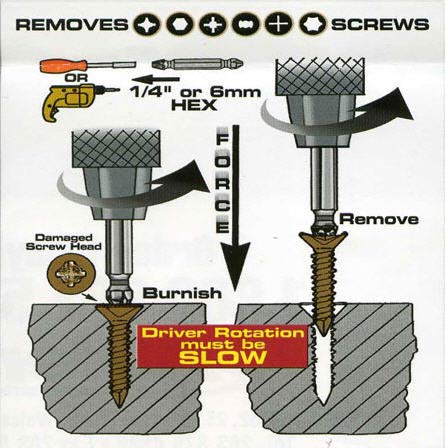 And here is the company boilerplate:

ProGrabit is a drill and extractor in one tool that removes screws or bolts with any type of damaged head, from any material. No more guesswork in matching drill size with extractor, as with manual tools. ProGrabit’s quick connect chuck capability increases its ease of use. Simply drill, then flip and extract.

ProGrabit is made from high quality, tempered M2 high speed tool steel for long drill tip life. Its state-of-the-art tempering process withstands temperatures to 1,000˚F, without softening. ProGrabit has been specifically engineered to drill into bolts of grade 8 or 10.9 class, without excessive wear.

Special machinery is used to impart a self-centering Winslow tip on ProGrabit, which prevents drill “walking” or “wandering”. This self centering feature also permits dynamic adjustment of the drilling angle to keep the tool on-center.

ProGrabit has deep, serrated edges on the extraction end of the tool, which are capable of biting into a damaged screw without slipping. A high degree of torque is applied to the screw to overcome even the greater resistance found in rusted screws, screws as long as 4” and screws in hard wood. Free spinning screws may also be removed with ProGrabit.

There is just something very satisfying about a tool that works, and a tool that works well is just a joy to use.  My Patent 1892 Stanley hand planes are such tools and so, as it turns out, are the GRABITS by Alden Corporation of Wolcott, CT.

Designed to extract screws (they have them for bolts too) the Grabits do just that.  We old boat guys, that is, we guys who work on old boats, often stumble into ancient fasteners and shake our heads when despite all our care trying to maintain pressure on the driver the head slots strip out.  That’s it, no easy answer—until now.  The accompanying pictures are from a 55-year-old boat undergoing work in my shop.

In my experience these tools are extremely durable; my smallest extractor pulled several hundred screws with paint/resin filled heads while I was removing an old laid plywood deck and is still going strong.  In a world of junk tools where, ‘just don’t make ‘em like that anymore’, it is satisfying to find new tools that are such a joy to use.

I see in your side ads you now carry Grabit extractors. Their fantastic! I use them on occasion when I ruin a screw putting it in or taking one out. I reuse my screws sometimes so I occasionally have one strip out. This quickly extracts the screw so I can continue my work.

I have been in too much of a rush sometimes and mess up the extraction, but by tilting the drill to one side in slow reverse it bites in again and the job is complete.
Glad your carrying them.

Concerning proGrabit Extractors: I used this item in correcting some errors on RAIDER in Estonia. It only works on brass or mild steel screws, not on drywall screws. The drywall screw steel is too tough. I think your patrons should be warned, as drywall screws are commonly used, especially as temporary clamps, in epoxy construction. 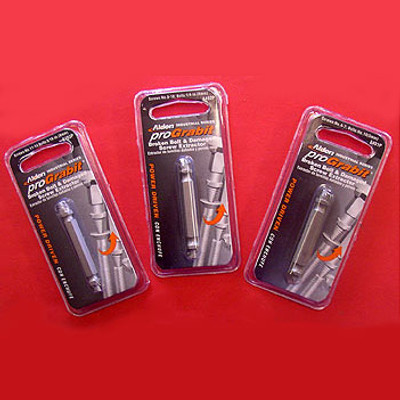