SKU:
JM-PIRAGUA18-ID
Availability:
not available for will call
measurement:
imperial

Rhett Davis brought this prototype Piragua18 (see photo above) to our Midwest Messabout, hauling it strapped to the roof of his compact pickup while towing his AF4. This is the basic 14' Piragua stretched another 4' to gain a good amount of extra capacity. The shorter boat is a bit loaded by two adults but this longer one can handle them.

I had a chance to try the Piragua18 for a brief time at the messabout. It was about what you might expect. I paddled it solo so it was far from fully loaded. It feels "longer" than the shorter boat of course, tracks straighter but is harder to turn. It might be possible to reduce the depth of the bottom skid to get faster turning but then again a lot of people want the straight tracking. I'll bet it is faster in calm conditions but maybe slower on windy days where the windage of the extra 4' becomes a bother. I was able to stand up in it but wouldn't do that regularly - it is too tippy as would be any boat this narrow and light. Want to make it more stable by going wider and heavier? Go ahead but then it will be too wide to use a double paddle with any comfort

Piragua18 will float 500 pounds before its bow and stern start to drag the water. The empty hull should weigh about 100 pounds leaving 400 pounds for people and gear and that should be enough for two grown men.

I've also shown on the drawing how I would rig a boat like this with an electric trolling motor. A typical trolling motor and 100 amp hour trolling motor battery will together weigh around 100 pounds and this hull will handle the weight of the rig better than the shorter boat. I'm thinking that is no need to get a large motor. The smallest I've seen for sale lately was 30 pounds thrust which is usually rated at 1/2 hp. That should drive the boat about 5 mph. Better would be to throttle to about half power which should give about 4 mph. The battery has to be a full sized deep cycle trolling battery. The batteries should never be deeply discharged, in spite of their name, and for long life they should not be discharged more than 70% of their capacity, and they should be promptly and fully recharged after use. At full power the 100 amp hour battery should give about 1.25 hours of endurance for a range of about 6 miles in calm conditions. At half power the battery should give about 3.5 hours endurance for a range of about 14 miles. Note that at high rates of discharge a battery has inefficiencies that prevent it from delivering its full charge. Anyway, power and hull should together weigh about 200 pounds, still leaving 300 pounds for folks.

This hull might be a good starting point for a beginner's sliding seat rowing boat. It has the length and light weight and wide open interior that would take rails for the seat. She's way too narrow for rowlocks mounted on the wales. You would have to add riggers. No doubt the best approach would be a drop in unit that has rails and riggers and foot braces all bolted together. You would have to secure it to the hull somehow but that could be done in such a way that the unit could be removed and the boat returned to its canoe configuration.

Anyway this is powered I think it would be a good camper's boat assuming there is no real rough water about. The ends are boxed in with buoyancy/storage volumes and the center 9' wide open for sleeping. The hatches into the storage boxes are small, only 6" wide, in order to make them less likely to take water in an upset.

Construction is simple nail and glue like the original Piragua. Three sheets of 1/4" plywood will do it. I don't think these boats need epoxy coatings if they are stored under cover. The chine corners need to be armored with fiberglass set in epoxy and the inner seams given a fillet of epoxy putty to keep water from creeping into the seams. 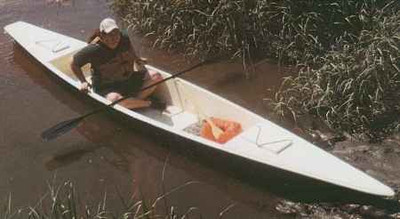