Don't have any ideas on the square beads, though they look like maybe they might distribute pressure better for chaffing or clamping. What I was thinking might be good was that the short ovals or spheres would work for making sliding fixtures. An example is a plywood sheet saw. Various DIY plans have U-bolts covered with beads sliding on tubes, holding a circular saw mounted on plywood. The executive scarphing jig for instance. 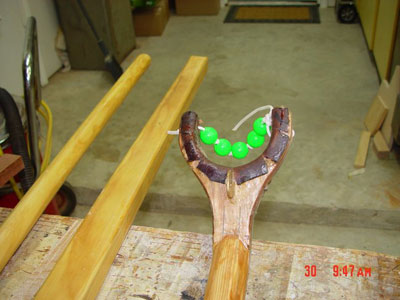 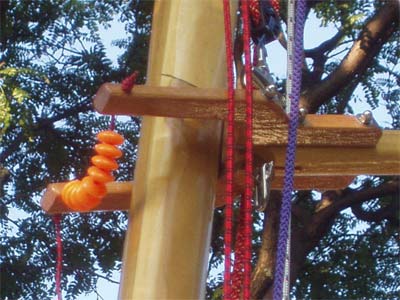 The gaff is of traditional design with a tumbler which pivots and maintains alignment with the mast vertical, and a stainless plate for the throat halyard and nock attachments so that halyard, gaff pivot and mainsail throat are all kept in column for good sail set.

Your parrel beads are both perfect side and shape for this. The orange color isn't too clashy either.

Below is a photo of one of our long oval beads being used as a tie point for shock cord used to hold a hatch cover. The boat is Bill Moffitt's Mikesboat. 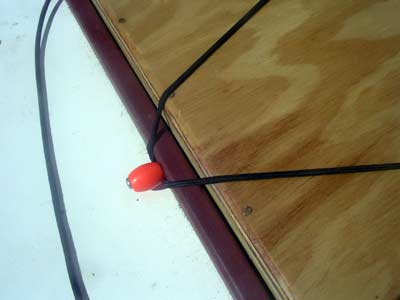 Chuck:
I have been obsessing on how you can sell/use those square beads. Then I saw this pic on Shorty's site and the answer came -- as spacers! Here is Shorty's paddle holder and the beads would work here where he shows the spacers . . . Potentially lots of uses on boats...
Gary Blankenship 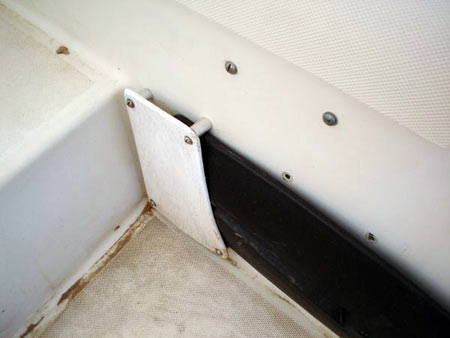 Recently I was up in Portland for the Columbia 150 cruise and met Rick Russell. He built a Houdini, which he was sailing there, and had equiped it with sailties made from our short oval beads and short pieces of 3/16" shock cord. Clever 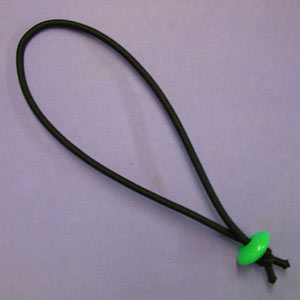 I have been getting those plastic beads from you and I use them to stow Greenland paddles to a kayak bow. They help hold the line off the deck for sliding the paddle under the line and when tight, act like wheel. Anyway, someone saw a picture of it and asked me where I got them. It turns out, they are not easy to find. Some people use super balls but they dry rot pretty quick and cedar balls that are easily found seem a little small. Just wanted to share that. 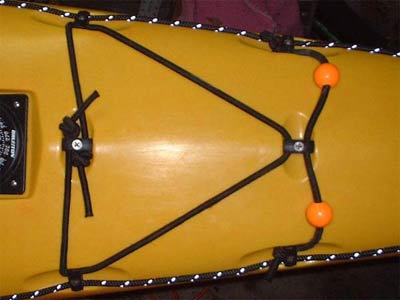 We have a tandem kayak which has a pair of lines - one raises the rudder and the other lowers it. They both run through a jam cleat and are hard to distinguish since they are terminated with identical round beads. 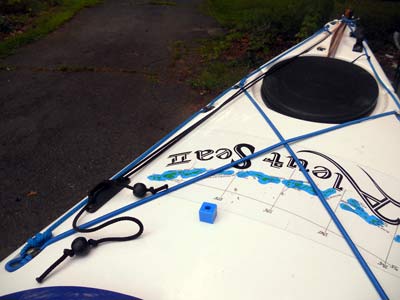 One of your fine two cent beads fixed all that - the cube is easily distinguished from the round bead by feel â important since the cleat is behind the cockpit and so most changes are done by touch. In fact the cube is the best shape for this job because of its feel. Plus in our case the color somewhat coordinates with the kayak. 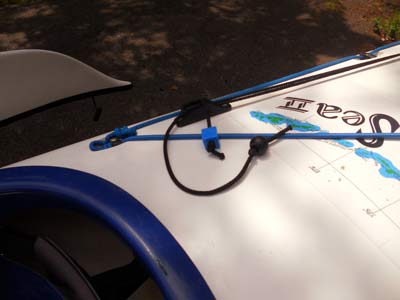 As soon as the kayaking world is aware of this, the demand for your cubic beads will grow so that youâll need to raise their price to maybe as much as three cents.

I bought more of your cube beads and will use the rest to teach multiplication to our six year old.