Moby Dink was one of my first projects. I built and used the prototype for a few years before selling it to a man who uses it to tend his farm pond. If I were to do this one again I wouldn't change the hull at all but would try the small lateen that I put on Tween. Indeed, Tween is pretty much a redesign of Moby with the idea of giving it a V entry on the bow for better action in chop, and the lateen sail for simpler set up. But the gaff sail was instructive. The photo shown above is of Dean Raffaelli's Moby up in Chicago. One thing I noticed was that the gaff takes a while to set up because it has so many lines. Perhaps it is not a good choice for a trailer or cartopper because of that reason. But the payoff is that all those lines give you great control of the sail shape. You can tweak the thing in any direction to adjust for any wind condition. Also I think I became convinced that the mast stiffness of a gaffer is critical for sail control in a stiff wind. If the mast bends aft, as it will in strong winds, the gaff sags off, the sails leach bellies out and she is no longer close winded. But if the mast is stout and the skipper can play all the lines properly, the gaff sail can be quite effective.

Here are the Moby words from the catalog:

Moby Dink was designed to be a very easy, inexpensive beginner's project and, at the same time, to be a dinghy for a rich man's yacht. Fitted with a trolling motor, she would make an excellent pond fishing boat.

Moby Dink's construction is of the old fashioned nailed-together type, and anyone who has built a shoe box in high school shop can handle it. All panel shapes and bevels are defined in the drawings. The sides are cut to shape, bent around the center frame, and the end transoms are nailed in place. The wales and chines are installed and the bottom is fitted and trimmed like a pie crust and nailed in place. There is no lofting required and no construction jig need be built. Two sheets of 1/4" plywood will make all her plywood parts, including the sail rig parts. A pattern for sewing your own sail is also given on the plans. The prototype required 60 hours labor and $160 to build including building the sail rig. The sail rig absorbs about half the cost and labor of almost any sailing project, large or small.

Moby Dink's sail rig is a genuine gaff, stepped up front out of the way. Her sail area is modest and she is handy in a good breeze. (Keep her in protected water, please.) She will tack in one second. Moby has a pivoting leeboard and rudder which will allow sailing her right up to a beach. Serious yachters might also use her as a tender. The 6-1/2 foot oars are detailed on the plans. 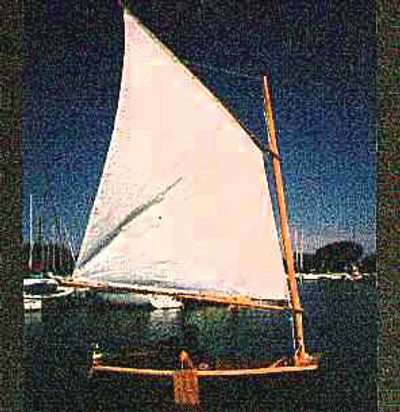