Mixer is a stab at mixing some features of my prams with the features of the original Roar rowboat. The prototype Mixer was built to perfection by David Boston of Factoryville, Pa. That's him sailing on vacation in Maine.

Mixer's beam is half way between that of Piccup, which has "stand up and walk around" stability, and that of Roar, which is too tippy for serious sailing. They all have a similar multichine cross section. Dave was very happy with the stability of the prototype. He reports sailing in white caps with no troubles. 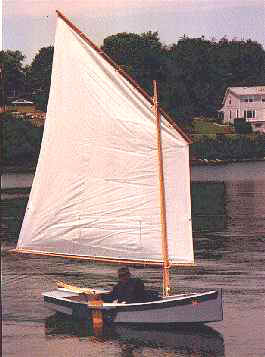 The pointy bow causes a loss in carrying capacity compared to a pram bow. Mixer would need to be stretched at least a foot longer to meet Piccup's capacity. But I left Mixer at 12 feet for two reasons. I've found a 12 footer can be cartopped without bow tie downs and few new cars have bumpers suitable for bow ties. Longer hulls usually need bow ties (except for narrow jobs like Toto). Also, the 12 footer can still be got out of four sheets of 1/4" plywood and may be a tad lighter than Piccup. At any rate, Dave's Mixer has sailed with two adults aboard and was quite happy.

Mixer's got the exact same interior layout (a 6.5' open cockpit between two large flotation/storage chambers) as Piccup for all the same reasons. So here is a cartopper with capacity for two adults or for camping one adult with a flat floor large enough to sleep on and lots of dry storage. 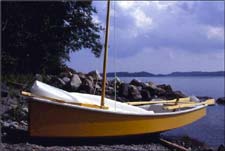 The sail rig is identical to Piccup's. If you look at my leeboards you'll see they pivot at a lower hull guard while their tops are braced to take loads both ways and only one board is required. Essentially they are centerboards mounted outside the hull. But no centerboard case is required and there is no need to handle the board in tacking as with loose leeboards. For anyone thinking about converting a centerboard design to leeboards, note that a leeboard should be mounted at the hull's broadest beam to be in flow parallel to the hull's motion. The sail rig then needs to be placed for proper balance. 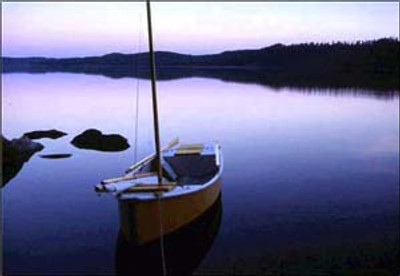