They started a "cruise", not really a race, 200 miles up the protected waters of the intercoastal waterway. They say the wind blows strong and from such a direction that you reach or run the whole way and usually in smooth water. The area is pretty unpopulated and in the several days it takes to make the run you must be self sufficient including taking all your food and water needed.

One participant wanted to build a boat for the event and started with a look at Raider. Raider was also made for a "race" but in the Baltic where the wind is not nearly so reliable, thus it was also meant to row well. The Raider crew always bunks on shore, in splendor, so carrying gear in the boat is not really required.

The Texas boat was to have a crew of two and it would best if those two could sleep on the floor of the boat although storage would be needed for a tent also. Plus all the rest for several days including a few hundred pounds of fresh water. So it would have to be different from Raider. No need for that somewhat elaborate V bottomed shape, either, since it was expected to be max hull speed reaching and running in smooth water. So a flat bottom was fine. CL also suggested the simplest possible construction, maybe even be able to build it on site in the days before the race.

I doodled some doodles and decided to try a lenthened version of Mayfly16, the prototype shown here by Tom Fulk: 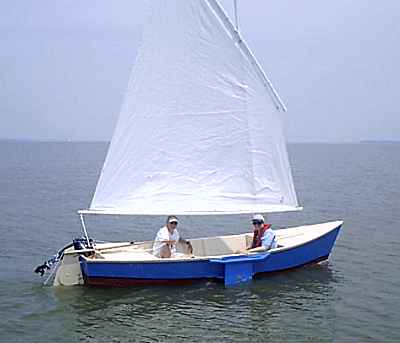 If you're gonna lengthen it, might as well add 8' or so, the length of a plywood panel. I was asked to keep the bottom narrow enough to plank over with a single width of plywood, 4', like Mayfly16. The sail rig was also to be kept simple and need not be large given the usual strength of the wind there. My second or third doodle looked like this:

The two sails and masts are the same as my Ladybug rig, something CL already has on hand, at least one of them anyway. Then there is a plan to have the ability to mount a solo mast in the boat's center.

So in general we have a long skinny flat bottomed sailing skiff of the simplest sort of construction. There are two cockpits so the sailors can sulk and mope apart from one another on the long trip, no need for mutiny or worse. The cockpits are each 6.5' long so sleeping on the floor is possible. There are storage/buoyancy chambers fore and aft. They should help a lot in a knockdown but a boat with 13' of open cockpit can swallow a huge amount of water in a knockdown. One thing that might help a lot in such a situation is to tie large air filled fenders outside of the top wale to give the narrow boat broader shoulders to lift it when it goes sideways.

At first I gave it long bench seats like Mayfly16's but on second thought I changed to individual seats that cross the backs of the cockpits. On a trip this long you must be comfortable. These should be quickly removable to allow clearing for the sleeping spot. The bench seats simply can't allow a center aisle wide enough for sleeping. I might add that if the boat were used on occasion to take out a very numerous crew, say a family reunion, then I would suggest leaving the seats on shore and have all sit on the floor. Then again, if you are never to sleep in the boat you might install the bench seats, which can be somewhat complicated but usually provide the best comfort. Anyway, the side view cross section ended up looking like this:

I drew up the expanded panels and made a card model that looked like this: 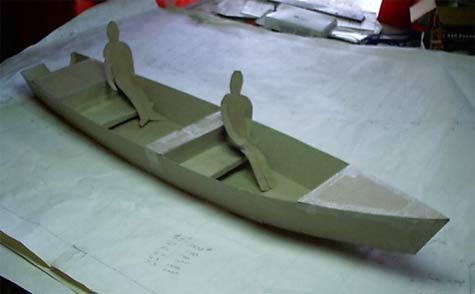 It stern has my usual open well with a place for a small motor. I drew up the sail rig in more detail and got this:

No real change here from the original cartoon but I've shown the single mast setup in dashed lines. The tiller of such a boat always bothered me. The masts are on centerline. The tiller has to end short of the mast of course to allow it to swing. So the skipper has to hand it back and forth to himself sometimes on tacks. I think what I show is the best approach, or at least the simplest. Any other rig would require some linkage or perhaps a large oddball tiller. This should work OK given the long stretches with no tacks required in the race.

About this time, with the design pretty much set, I made up a Hullform model which looked like this: 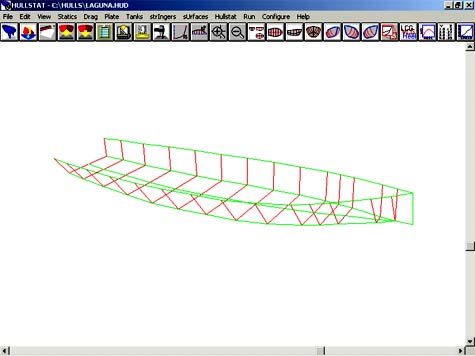 The program doesn't seem to allow slanted stems and transoms so it isn't exactly per the drawing. These are very good at scoping out displacement, although with such a simple design you can do OK with a quick hand calc. For example here, if the boat were loaded down to where its stem hits the water, what I would call the maximum displacement (although the boat could clearly take a lot more weight with ugly flow lines), then the waterline length would be about 21'. The maximum submerged cross section would be about 7" x 48" in area (draft times beam) which is 336 sq in which is 2.33 sq ft. So a "prizm" 21' x 2.33' would have a volume of 49 cubic feet. Boats like this almost always have a "prizmatic coefficient" of about .55, so I would expect the real boat to have a displaced volume, at 7" draft" of .55 x 49 which equals 27 cu ft of water. Water weighs about 63 pounds per cubic foot so that displacement amounts to 1700 pounds of displacement. The Hullform model predicts 2000 pounds displacement at 7" draft so perhaps the difference is partly because the side flare gives a bit more displacement and perhaps the hull is fuller in the ends than the norm. I think the higher coefficient is good in smooth water.

At this stage I could start a layout of the plywood panels. No need to make this boat heavy so I would call for a bottom of 1/2" plywood and maybe 1/4" plywood for all else, although some of you can't stand on a 1/4" ply deck. The total on first cut looks to be six sheets of 1/4" and 5 sheets of 1/2". Usually 1/4" sheets weigh 25 pounds and 1/2" sheets weigh 50 pounds so the grand total would be 400 pounds. I would expect the completed hull to weight about that. So the boat will have a lot of capacity for the trip.

The prototype was quickly built by Gordo Barcom in Texas and here he is blasting along with family and polytarp sails straining. It was clearly a fast roomy boat: 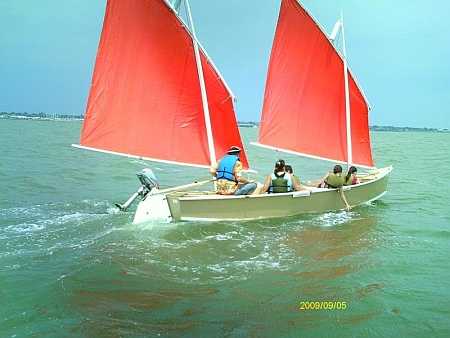 Then another, the Blue Laguna, was built and run in the 2010 Everglades Challange, 300 miles from Tampa to Key Largo, by Andrew Linn and Michael Monies. This boat had very little testing time as far as I know before the race. But they finished in 5 days and a bit but I think they slept in motels for two of the nights while the "press on regardless" guys were daring the night waters. Here they are launching off the beach (a requirement for this race): 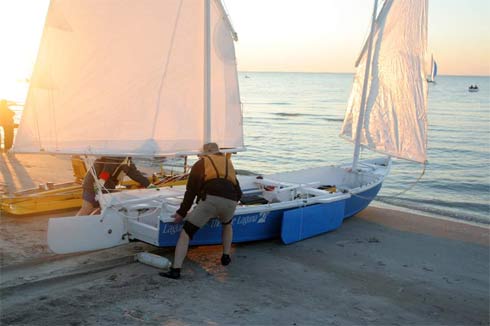 And then pushing off in shallow water (there is a Sea Pearl behind them for comparison): 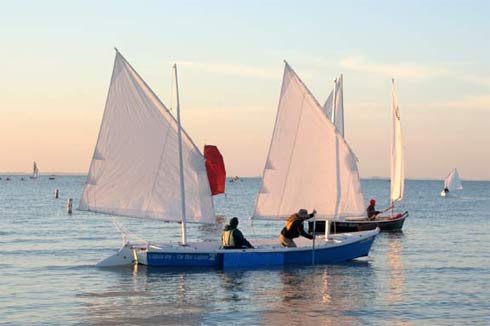 Finally a really nice photo of them approaching one of the three checkpoints in the race: 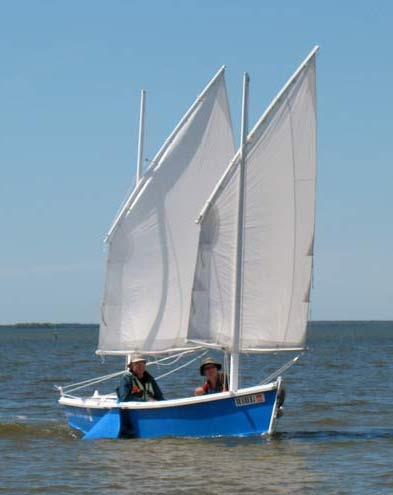 I think both Gordo's boat and the Blue Laguna have been modified in details from the blueprint but the rigs and basic hull features all look correct. I've noticed that no one takes sleeping floor space as seriously as I do but that is OK.

Well, I was thrilled. My main caution would be that this probably is not a good solo boat due to its size and split rig. I think it might be a good family boat in that there is plenty of room for everyone and a rope for all idle hands to play with. The other caution might be that, even though the boat has big buoyance boxes, it also has large cockpits to swamp in a knockdown and it will roll upright with a lot of water to bail. So you note on Gordo's boat he has inflated fender tied to the mast head, an idea to reduce the carnage of a knockdown.

Firstly, I have to congratulate you on the Laguna article. Iâve been doing a lot of thinking lately about what is really important in this boat-world of ours, as I think that some people are becoming too tied up in the idea of the boats being an end in themselves, rather than being part of a larger âactivityâ. I probably havenât put it very well, but Iâm thinking of the people who view the boats as vehicles for their egos, and spend their time going to Classic Boat Regattas and other such meetings, instead of getting out there and using the boats for what they were designed to do. Still not happy with how Iâve expressed myself, but I hope you will understand.

With the above in mind, Iâve been spending more and more time thinking about Jim Michalakâs work, and that of Phil Bolger. These guys (and a few others such as William and John Atkin, Sam Devlin, and John Gardener) have never lost sight of the functional role these boats are designed to fill. The fact that I designed a stitch-and-glue âfunctional equivalentâ of Phoenix III is evidence of where Iâm heading. However, I think that the very best boats (for our purposes) are the brutally simple examples of the work of the guys Iâve just mentioned.

Your commissioning of Laguna is right on the mark, and there is nobody better to do the work than Jim. âWell doneâ to you both.

Chuck, thank you for commissioning the Laguna design from Jim Michalak. 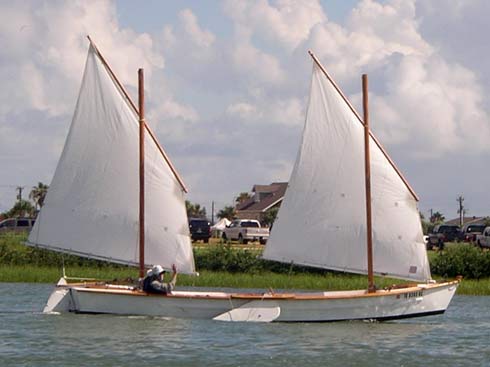 I am thrilled and amazed with the Laguna's overall performance, draft, speed and most of all its "simplicity of build". It is my sole mate....the "boat" love of my life.
I slept in it in my driveway last night. 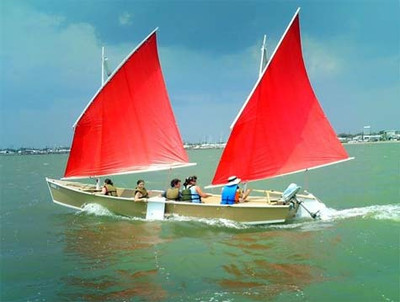