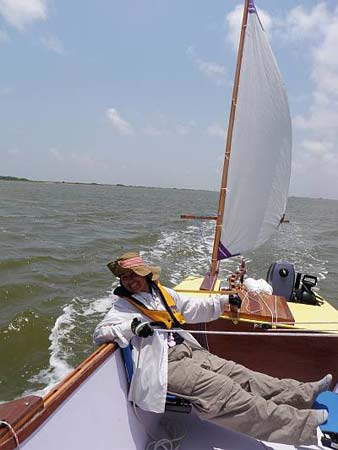 In 2010 I was lucky enough to sail the TX200 with Chuck Leinweber in his Caprice. Chuck had me design Laguna just for this event and the Laguna fleet did quite well with the mention on the side that apparently in 2010 the winds were abnormally light, the veterans complaining about how mild it all was even though we were at hull speed pretty much all the time. What a great time I had!

The first stop on the trip is at a place called "Haps Cut", a large drainage channel really from a large shallow lagoon to the intercoastal waterway, which is a man made ditch in this area. By this time Chuck was already talking about some sort of minimal cabin for Laguna, at least in the bow cockpit.

As we sailed along I started getting ideas about another possible TX200 boat. I play this little mind game all the time while I am boating - how could this boat be better?, etc. Well, the thing about the TX200 that I noticed was that the sun is a real killer. I noticed some of the local fishermen are totally covered, even though the daytime temp is in the 90's, right down to gloves. Some were wearing what looked like full body stockings, right up over the face and head, sort of like a super hero costume. All of the veteran boats on the cruise had serious bimini tops and such, Chuck's included, and for a new TX200 design that would be a must.

I thought shallow water beaching was important too, especially at Hap's Cut. If you could run your bow ashore you might be able to step on dry land and avoid the totally repulsive mud there, at least knee deep, at least that is how far I sank in when I tried it.

And some sleeping shelter like Chuck was talking about, mostly to avoid the land tenting situation. All the night spots had good places to tent but I know for experience that with a small cabin you can leave the tents behind, your comings and goings become much quicker and easier. And if you have a crewman you can maybe flop down inside for siesta while the copilot follows the ditch.

Another impression I got was that a crew of two was about ideal, much easier going overall than a solo effort. It's a lot like taking a long driving trip where the ability to swap drivers regularly means you can almost carry on forever. 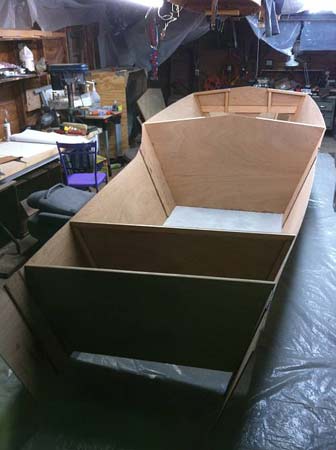 There was almost no sailing to windward. Only when making ports did one have to do that. And maybe while running up the Aransas ship channel. So I thought a really refined hull shape was not required. A simple scow might do it, at least in 2010 winds.

So I drew up my best guess and called it Hapscut.

Simple scow flat bottomed square toed hull. Narrow on the bottom so like Laguna it could be planked with 4' wide plywood. Wide on the top, a lot more flare than I normally draw, because I was quite impressed with the small San Francisco Pelican on the trip as it handled 2 grown men in its 12' length with seemingly no problems. Square bow to make beaching easier mostly. The idea is that you can easily stroll through the cabin and out over the bow to avoid stepping at all in any nasty yuck. 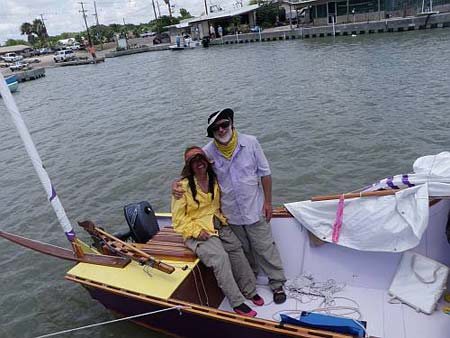 The cabin itself is long enough to sleep on the floor but really only wide enough for one person. It is high enough to sit up in and read. It is minimal but I think a big advance over a land tent. Two people could wait out a storm in there. It has the usual slot top so with top stowed it becomes an open boat allowing one to walk from cockpit, through cabin and out the bow without climbing over anything more than 2' tall. With luck the cabin will prevent swamping of the entire boat in a knockdown, another good thing about a large amount of flare in the sides.

The crewmember is supposed to sleep in the cockpit but that requires the quick removal of the two large seating flats. Given a good sun top this might be the preferred place to sleep. On the 2010 trip there were no bugs or mosquitos but if needed you could quickly net in the sides of the cockpit. By the way, the length of the boat is really determined by the need to sleep two on the narrow bottom, thus you need 13' minimum just for that. 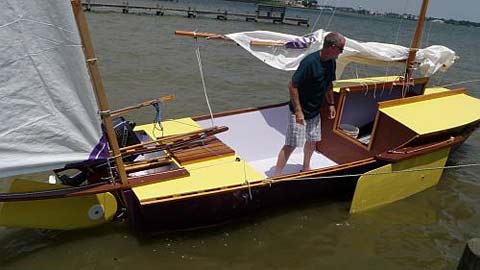 Aft of the cockpit is the buoyancy/storage volume. This buoyancy will save your butt in a knockdown since it will support the stern, float the boat level on it side until you recover. Don't compromise it.

One thing I goofed on maybe in Hapscut was that I did not draw a motor well as I did with Laguna. I know if I were building one of these for myself I would have it. Extend the stern back another 18" with the open well ending with a transom angled 15 degrees. Then you could easily mount a motor and store a lot of messy gear back there. The motor sounds like cheating but it can save you butt on occasions and in general you can cover a lot more water even if you seldom use it because you won't play light winds so cautiously. But I don't know if a motor can save your butt in really rough going. 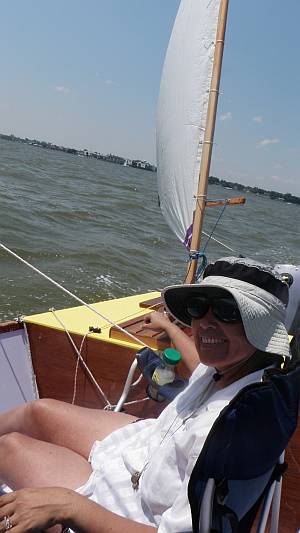 Although Hapscut was designed for a long cruise, it clearly has the makings of a good daysail family boat as long as you stay out of rough water. It has the room, shelter, and ease of use that make for a good family boat. Finally, although designed to take two men on a long trip, it clearly is not too big or complicated for single handing.

2012. John Goodman built the prototype. John is a very experienced builder and sailor which is a great thing for me. He found a few errors in the plans. The main flaw was in not allowing enough room between leeboard and hull with the result that the leeboard can at time bind against the widely flaring hull side. The simple fix was to make the leeboard guards wider. I fixed that on the drawings. There was another potential issue with the bevel given for the sides of the bow transom. John didn't agree with my number and supplied his own. I must admit I have rerun the space age rocket science vector analysis that I use to give the bevel and I keep getting the same wrong answer so I don't really know what to think. I have added John's bevel to the plans beside my own so you will have to assemble the parts enough to scope it out, never a bad idea anyway. There can be an explanation in this depending on where the bevel is measured. 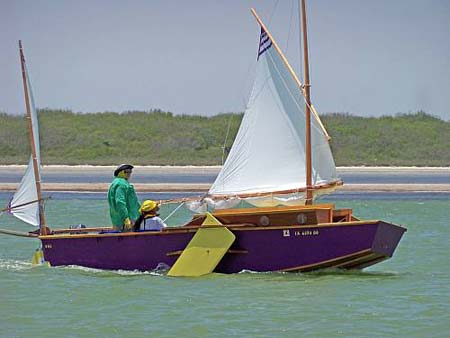 John did the right thing and made his hull with the 18" stern extension. I should have drawn it that way in the first place. On the updated drawings I now show the layout for the added length to the side panel and the resulting transom pattern. But the extension does not appear in the side views, etc.

John took her out on a few short shakedown runs and then immediately into the Texas200 for which she was designed. He crewed for his wife Rosa. They camped in the boat at the stops. He reported no severe problems although he said she had stout weather helm until he rerigged the main further forward. Now, I drew the rig to balance well without the mizzen so this is not too much surprize, especially in the strong winds of the TX200 where the main is always reefed but the mizzen is not. To add to this I believe his mizzen is mounted on his new transom extension 18" aft of the original mizzen location which would add to the weather helm. But not to worry. These rigs are very easy to adjust and a quick and permanent fix, if needed, might be to adjust the rake of the mast by moving the mast partner, which simply bolts to the deck slot beam, forward as required. Anyway, that is how I look at it now. I would not be too quick to change it until I also sailed her in light winds since high winds almost always add to weather helm. Also, in the strong TX200 winds with the boat going hull speed all the time he found the sink weight in the rudder to be too small, with the result that the rudder would not hang vertically and instead would slant back a bit. That increases the helm forces which could be quite tiring given 40 mile legs of the TX200. So maybe the rudder could stand more lead, or maybe the sails adjusted to remove the helm force. Here are a few photos. You can see that the extra stern extension adds a lot to the boat.

The line of fine bubbles following the boat in that photo means to me she was pretty much at or above hull speed, maybe planing. Also, note that the boat looks comfortable to the skipper, very important on the long stretches of the TX200. Someone sent this shot of the boat at that time and she is trying to rise up and plane. And note that the power of the coastal wind is such that you can get this speed in flat water with just a scrap of sail.

John also posted some great videos of this boat and others on YouTube.

It is all simple nail and glue construction needing nine sheets of 1/4" plywood and four sheets of 1/2" plywood. 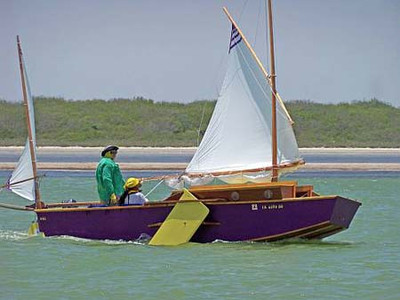