SKU:
JS-FLATTIE-PP
Availability:
These plans are spiral bound and laminated in order to protect the pages from the usual workshop spills and dust.
Measurements:
Metric

These plans consist of 60 pages of instructions, diagrams and photos. You have two options for purchase. You can order a printed version that is spiral bound and laminated in order to protect the pages from the usual workshop spills and dust. Or you can save money and buy the instant download which you can print yourself.

INTRODUCTION TO THE SAIL-n-OAR "FLATTIE" - Designed by John Sheen.
Developed from the small boats used around the world for creek and estuary fishing, the flattie dinghy has a reputation for stability, load carrying and handiness.

The Sail-n-Oar Flattie not only derives its name from being of a type of flat bottomed craft, sometimes called skiffs or sharpies, but from the use to which many of the original boats were put locally, fishing for flounders, plaice and dabs, known as "Flatties". 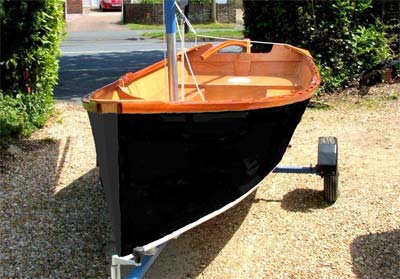 In rivers and creeks where the ebb tide uncovered mud and left a shallow channel or stream, was, and still is, ideal for this fishing method called "Groping" and the boats used were known in some areas as "Groper's Flatties" The boats were generally crudely constructed from rough timber, knocked together, rather than being built in the proper manner, Often they were built from old floor boards nailed together and finished in tar, creosote or any old left over paint, if finished at all. The sole purpose of the Groper's Flattie was to offer support while being pushed across the mud at low tide to reach the shallows. Thereupon the fisherman, knee deep in water with his hessian sack tied around his waist, would begin groping the bottom for fish. At the end of a session, or when the tide began to flow, the flattie would be pushed across the mud to dry land. Flatties were also used for general work and most boatyards owned a flat bottomed workboat of some sort. They go by different names in different parts of the world, such as harbour, dock, or lumber yard skiffs, flatirons, punts and board boats, but all are some variation of skiff evolving from the time man first cut planks and gave up hollowing out logs.

From these humble beginnings the Sail-n-Oar Flattie has developed into a handsome general purpose craft, having an excellent sailing performance with her balanced lug-sail. She rows well with little effort, and can be powered with an outboard motor. She has adequate built-in buoyancy.

The Sail-n-Oar Flattie is a safe family boat which is easily built with very few tools by anyone with basic DIY skills.

Constructed of marine plywood, epoxy resin and glass cloth, she is a strong but light boat, easily handled both afloat and ashore.

The FLATTIE is a versatile design suited to many uses. 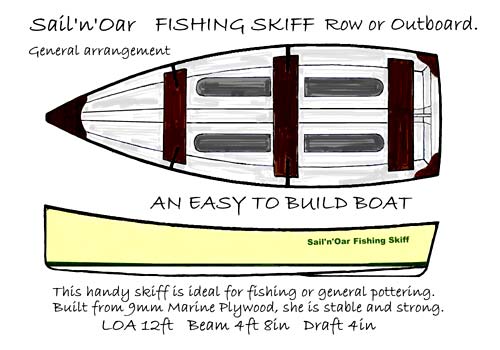 The Sail-n-Oar Flattie can be built as a rowing/outboard dinghy economically and with minimal effort, and will give years of robust service for you and your family. 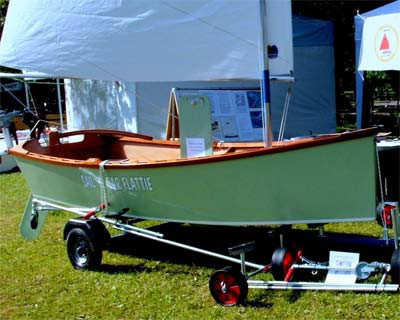