This one began when Boatbuilder Barry Wicks came across a Guy called Mike Maskill, a banjo player residing near Brisbane somewhere. Mike had recognised the dire straights that the East Timorese coastal villagers were in after the Indonesian supported militias had destroyed every fishing canoe in every village on the coast. He had started a voluntary organization to supply replacement boats to the villagers but was having trouble locating suitable boats, or even a design that would fit the needs while being cheap enough to build and freight. He hooked up with an expat Kiwi Boatbuilder called Barry Wicks. Aussie Boats for East Timor(ABET) was about to take off.

Barry meanwhile had come across my book "The New Zealand Backyard Boatbuilder" and contacted me asking if I could help. Could I? Would I? You bet!

Now as I said, Barry is a boatbuilder, did much of his trade training in the early 60s at Mason Marine in Wairau Rd on Aucklands North Shore with Frank Pelin, Richard Hartley was working in his design office just down the road and Bob Salthouse was beginning his design career across the road. There would have been a dozen boatyards in the area at the time and they were run and staffed by names which are now legendary, among those names was Laurie Davidson of Americas Cup design fame, living only a few minutes away unaware at the time that his career would lead him to design the successful 1999/2000 New Zealand defender and, living in Bellingham, Washington, USA to lead the design team for another American Challenger. 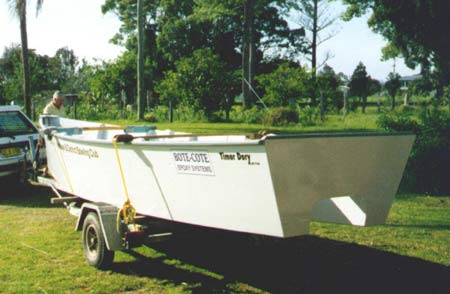 This hotbed of activity though had never seen anything like what I thought was required for a group of natives living in the tropics and trying to wrest a living from the sea with small boats. My researcher, a New Zealand Army type stationed in East Timor when I contacted her, told me that the locals could not row, they had always paddled, that canoes were the boats that they knew best, and that there was no longer the infrastructure to support fuel supplies and mechanical backup for engines. She confirmed my suspicions that big deep vee runabouts were likely to be complete white elephants, and that the bulk of the boats destroyed were dugout canoes and anything too different would not get used, and if used could have an adverse effect on the fish stocks.

So! It was with all this in mind that I sat down to draw "the" boat. Barry had in mind a kitsetting operation based at his home in Northern New South Wales Australia. He expected to make a couple and send them up assembled to evaluate them, and then send containerloads of flat packs up for local assembly. They needed about 12,000 boats so every shortcut was a help.

There is a plywood mill not far away from Barrys place. As it happened we did not use that mill product but it was to be construction plywood and builders yard lumber. The Old Tradesman made a much nicer job of the boats than I envisaged, pride did not allow him the luxury of a quick and dirty job but it was still not long until the Mk one Fat Canoe was built.

Designed for 5hp, with a sail for reaching and running and narrow enough to paddle she was sponsored by the McLean Shire Council and after launching was filled with relief supplies, not just fishing gear but hospital equipment, bicycles, computers, blankets and tools. All airfreighted up to Dili by the Airforce.

Barry got the surprise of his life when the trip included him, and he went up to do the handover and research the needs of the community. 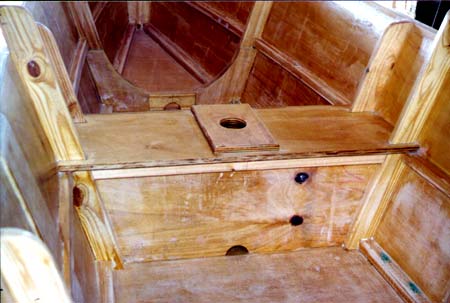 His description of the ceremony still has him choking with emotion. The people chosen by the UN Fisheries and agriculture officer had come close to starving without the boats that were their means of providing for the village. There are no seabirds in East Timor, all of the eggs for several generations had been eaten, there are no small animals, no edible plants left and no shellfish. All eaten . While for lack of a boat and fishing equipment a sea teeming with fish could not be harvested.

After a voyage of several hours in the Fat Canoe, pushed at about 6 knots by a tiny outboard, "The Boat" and her crew of four were carried bodily ashore by the villagers, and placed reverently under a shade house built to house the new vessel.

It is hard to explain just how important that boat is to those people, a subsistence economy dependent on fishing suddenly deprived of its boats and fishing gear cannot survive, and these people were close to not surviving. I must admit that the letters from the villagers were very very moving. 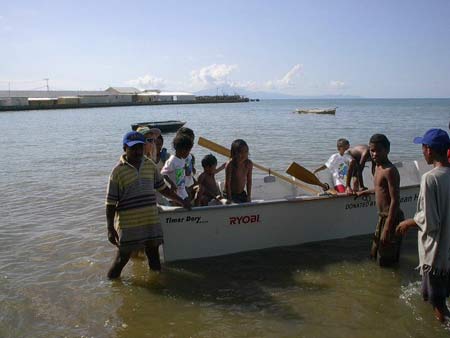 Barry and I went on to modify the boat, Mk11 was for a 10 hp motor, he went on a step further and altered it further to produce a Mk111 suited to a 15hp motor. There were several hundred 15 HP short shaft Yamaha outboards in a UN store somewhere and all of those were commandeered for the program.

Barrie and Michele-Marie now live in East Timor, teaching villagers how to build the "Fat Canoes" and how to use computers (Michele-Marie's skill). Barrys boatbuilding school has turned out dozens of these simple workhorses, and more importantly quite a team of locals who can build a whole lot more. They can be found all around the coast, and they are worked night and day by teams of villagers who own and operate them on a share basis.

It's a small thing, the original design took me a couple of phone calls and a few hours at the drawing board. No money changed hands but the rewards have been immense.

Watching how the boats went, and playing with one of the prototypes on the Clarence River near Barry's (then) Northern New South Wales home I was hugely pleased with the performance of the boat. So much so that I have designed a civilian version of the boat. I tidied her up a bit, specified Stainless fastenings and marine grade adhesives, a better grade of ply and nice paint. As a design it's a "good un". She will carry more load, faster on less horsepower than anything that I have ever seen. She is stable enough to stand up in, has enough capacity for a pile of people or gear, and is still light enough to be manhandled.

While the East Timorese use them to chase Tuna many miles offshore in the tradewinds swells as well as inshore fishing, I think that she is particularly suited to estuaries and swamps, tidal flats and inlets. Shallow places and fast currents, beaches and sandbars where the shallow boat with her protected motor will perform at her best.

She can be built shorter simply by leaving one frame bay out, and these 16 footers have proven both popular and economical, as well as fitting most peoples idea of proportion. Me? The efficiencies of the longer boat would convince me to build her as drawn.

This is a lot of boat for not much work, and very little cost, one which would perform as well in the winter with guns and dogs as she would in the lazy heat of summer with the offspring hanging their lines over the side while you laze in the shade. 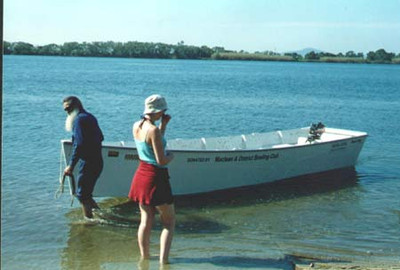