Blobster has a lot of features I like in a boat. Lots of volume for its size, sort of like Micro or Scram Pram. The multichine shape is almost exactly like Scram's but this one does not have a Birdwatcher cabin. It has the more traditional cabin with a raised watertight deck behind. Also it has one feature I would love to have in my personal boats - a step-through bow so that when you beach you can go forward through the cabin and out the front without going into the water or climbing over the bow. The cabin also has a slot top roof.

This shape of boat with multichines has proven good in rough water and with fair speed in spite of its blobular proportions. Blobster has about 600 pounds of water ballast in its belly and should be OK to 90 degrees heel although such depends mostly on weight distribution of the crew, something the designer has little control over. On the other hand, if the crew jumps overboard the boat will be almost assured of righting without their help. Then the problem becomes reboarding. Be prepared!

Sail rig is a large but simple 139 square foot balanced lug on an 18' mast. Mast is stepped off center to allow you to walk upright down the slot top and out the front. Should be rigged in an instant with no one going on deck ever. All very low tech built with common materials but effective.

The prototype Blobster was built by Miles Bore in Australia. He had built several boats prior, including a Micro, and did a great job of it using very nice materials. 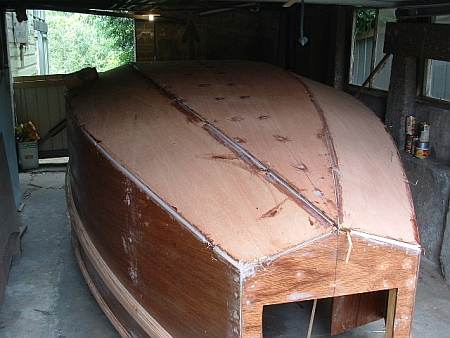 Outside and on its trailer for the first time, the likeness to Micro is clear. But you can see it was meant to be much easier to trailer and launch. 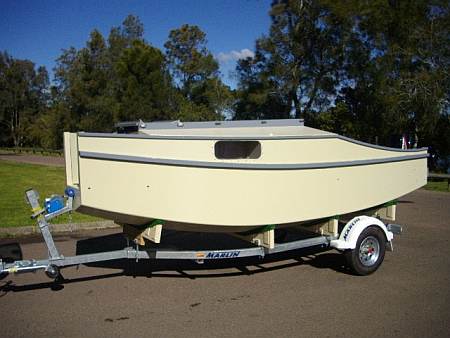 Then he used it for a while as a low power motor cruiser while he finished the sail rig. You can see how easy the boat was meant to use from the beach with its step through bow transom. 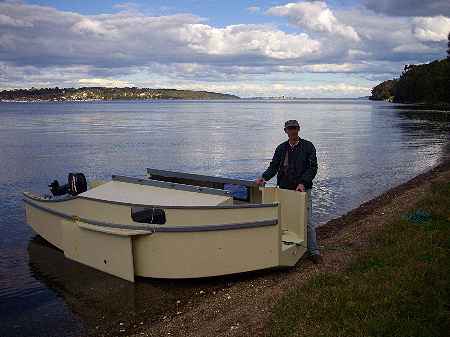 Then for the rig and off for a sail, shown here with ballast tanks full. Miles reports it sails with no vices so far. No, he hasn't capsized it yet.

Miles got this photo of the inside. The living platform you see is 7' long and 6' wide max and about 42" at its deepest from platform to slot top. With the slot top cabin and step through transom it is a pretty airy home. Maybe not the little cruiser that Micro is but clearly much easier to use in general and a good choice for a daysail when you have but a couple of hours at the lake. 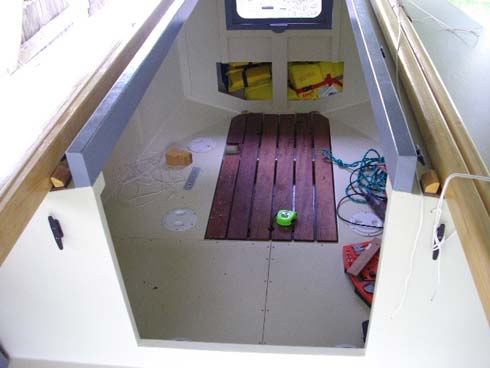 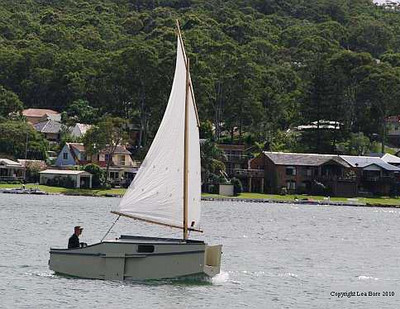