I had been talking to a customer at Boat Books where I worked about the problems of the world and what we could do to set things right, all the usual gripes about politicians, lawyers, and petty bureaucrats, you know the sort of thing.

But in among the odds and ends, we had a common interest of youth training for at risk teenagers. “Outward Bound” has a base in New Zealand, one which does incredibly good work, but which is expensive to run, and consequently costs more to attend than many can afford. A similar philosophy applied to a “local” level, on a weekend or holiday basis, was my friends thought, and he, as a keen boatie wished to run a small fleet of open boats around the huge shallow harbor where he lived, but as always a good idea, was unable to progress for lack of money.

There are two ways of fixing a funding shortfall. One is raise more money, and the other is to take a hard look at the costs. The naval whaler is the public perception of a suitable boat for this type of work, and the image of the big open craft pulling out from the beach under oars while the rest of crew set up the sails in one that will feel familiar to all. Actually, if you put a naval whaler anywhere near a beach you were for it, ‘sand between the planks’. But the genuine thing is in short supply, and some enquiries as to the cost of new boats was a real shock and totally out of the question, so we worked up a list of requirements with the idea of producing a design to suit.

Building the boat would be done with volunteer labor supervised by a skilled boatbuilder, and the materials should be easily obtained and worked with common tools and skills. She should carry six trainees plus an instructor, have a job for all when under sail or rowing, but be able to be single-handed when being ferried out to a campsite or returned. 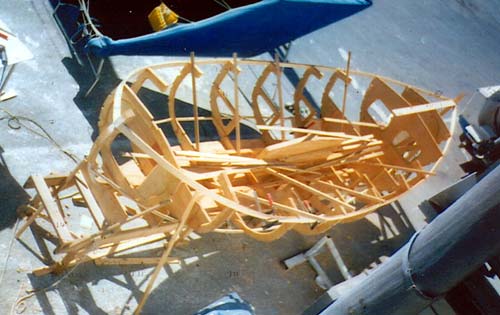 Transportation should be by trailer behind a medium sized car when she could not sail to a training destination, and she should be built at a length less than the 6 metre lower limit for the expensive commercial survey requirements that would be required by a bigger boat. We could make her as well built and as seaworthy as the surveyed craft but avoid the costs involved. 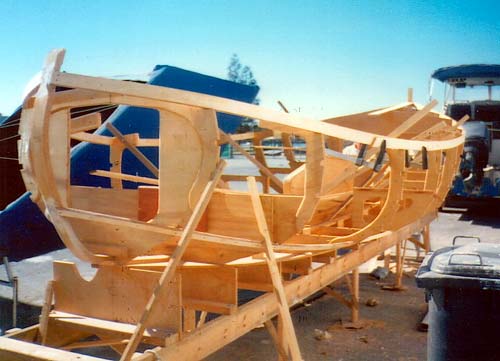 So, after a few months of occasional work at the drawing board, the 6 Metre Whaler emerged as you see here. Based upon the very successful yawl rigged version of the Navigator cruising dinghy, using the same simple plywood lapstrake over web frames and stringers structure. Traditional in her appearance, double ended, with two masts, and with enough sheer to be really pretty, she needs only about NZ $4000.00 worth of materials and about 220 hours of (competent) labor to complete a very nice little whaler which really looks the part.

She has a pair of straight allow tubes as masts, the same sprit booms and proportions of sails as Navigator. There are three rows of reefs in the main, and if the weather requires, she will still balance under main only, or under jib and mizzen only, which gives lots of choices as the wind increases in strength. All spars fit inside the boat to reduce windage when rowing and making stowage when training much easier.

An outboard motor is inconspicuous in its well under the aft deck, and there is a steel centerboard that makes her well suited to the shallow harbor and estuaries where she will be based. But that ‘board’ is 85 kg of steel to steady her under what is in fact a powerful rig for her weight. Responses from owners tell me she is a a very fast boat under sail. And in case of really over-doing it, there is enough buoyancy built in to keep all seven occupants afloat. 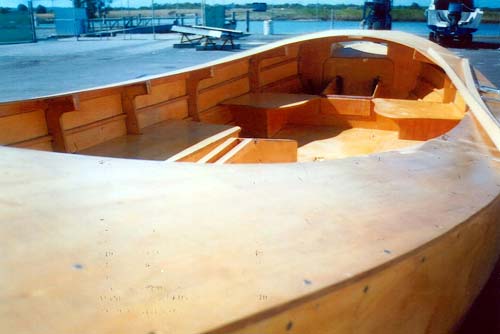 All six trainees will have a job to do when under way. There are three rowing stations on each side of the boat, while the instructor can take the helm and crack the whip. When sailing, there would be one each on port and starboard jibsheets, mainsheet, centerboard, mizzen, and helm. The instructor can relax and keep an eye out of hazards ahead while the crew does the work. 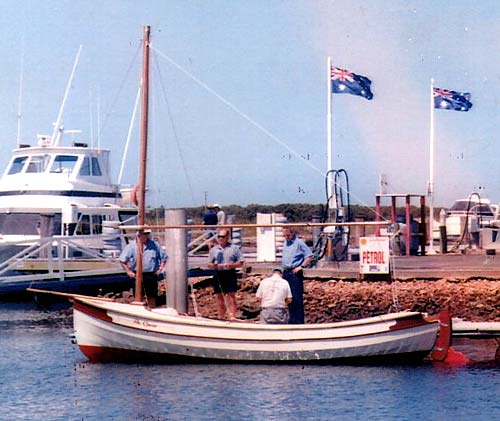 As a daysailer, one or two can handle her easily. I like these big open boats for the sheer feeling of space and comfort available in a relatively small boat, and it is in this role that the 6 Metre Whaler is most popular. There are quite a number now sailing as dayboats. One small group is chartering a couple and several are being used very successfully as cruising dinghies.

Quite a few people have asked if I would draw up a cabin for her, and should you want your boat to have a ‘lid’ on, then there is certainly room to do that. 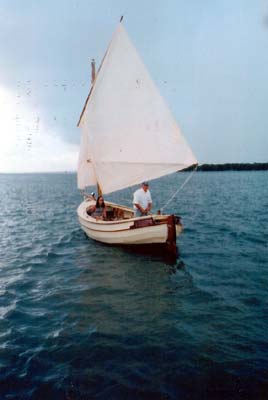 Plans for Gaff rig (both sloop and yawl are included) is available. 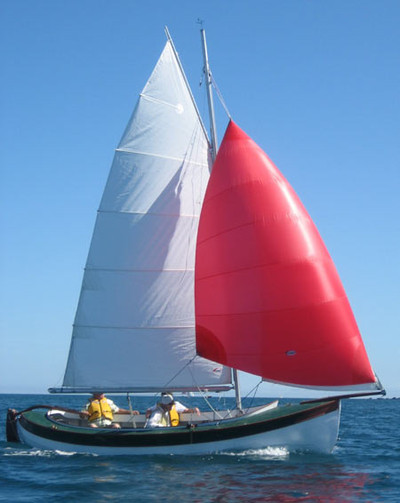