I decided to add this larger version of the Electric Moto Craft to my growing fleet of EMC hulls after a comment and request from one of my YouTube subscribers. He had been watching one of my how-to videos on building the 14ft version of the EMC, and asked about whether or not the 14ft EMC could carry two people. I told him no, that the hull couldn't carry the total weight that he had suggested, but I would think about “lofting up” the hull to a longer and wider version. I had other hulls I was working on at that time, and didn't want to commit to adding this hull to the list. But never being one not take up a challenge. I took a few minutes one day to scale up the lines of the 14 foot hull to 18 feet, to see how much work it would be, and printed out a copy of this “stretched” hull to see how it looked in a cardboard model and how the panel parts matched up. I just have to “scratch the mental itch” when it occurs. 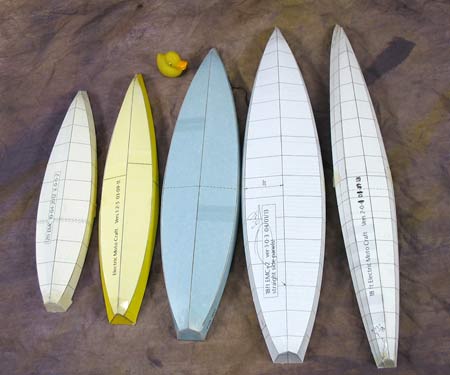 The first 18 foot hull looked pretty good as it was, so I replied to the original posters request, that I had stretched the hull to 18 feet and was generally happy with the results. The requester posted back that 18 was getting a bit big, it was going to weight a lot, and all the scarfing involved to join up two 4x8's and the “spacer sheet” between. OK, you can please some of the people......... So I let the idea sit for a couple days, but the mind started to itch again, so it was back to the keyboard and mouse to scale up the 14 again to 16ft this time. I gave the two bottom panels a 20” width at the beam, and filled in the curves ahead and aft of the beam. I wanted the hull to be longer than the 14, but I also wanted to add some volume to the hull for carrying the “weight requested”, and the supplies on a trip. 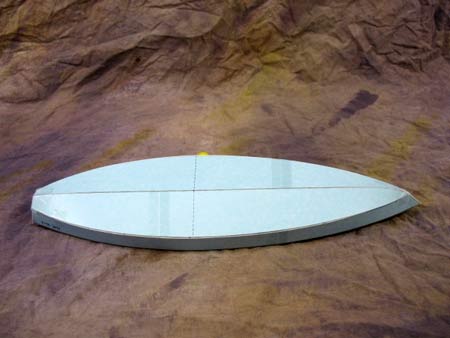 It took me three model hulls to come up with the final design of the scaled up 14 foot version that I liked. I actually had the finished model on the first try, but when I changed the fullness of the bottom panels, I had to change the “arc lengths” of the matching edges on the bottoms of the side panels. I also changed the shape of the transom a bit, and redid the way the two side panels are laid out to reduce the lofting involved. The second hull was used in making the latest “Tank Test” video on my YouTube page, but the final hull will have lower/narrower side panels to reduce the total weight, make it easier to paddle if you want to, and it just plain looks better.

This hull will also make use of the finger joints that I used on the 14ft version instead of the traditional beveled scarf joint (note: finger joint file is included with study plan package - link at bottom of page). I've been very happy with the finger joints and it seems to be just as strong a method as a traditional scarf, and much easier to get that perfect joint; in my opinion. You do have to add a 6” wide layer of fiberglass cloth to both sides of the joint , but I do that even with a traditional scarf joint anyway. I will also add a drawing and an “exceptions list” for those that want to use 6” wide butt joints instead of the finger joints, or a traditional scarf. I've been thinking of a way of using a fiberglass cloth strip to join the reduced size plywood panel parts before you do the actual lofting, but I will probably introduce that method in one of my videos.

This hull also has a transom to make it easier to mount the Electric Paddle® or any other type of electric motor to this hull. You could mount them off to the side, but I like to have the power in the back for a more direct push on the hull along it's center line. You could make two of them and have a sailing cat too. I'm sure there will be a lot of variety to the design from those of you who build this hull. Enjoy building your 16ft (+2) version of the Electric Moto Craft hull.