This hull is an “expanded” design of the 12ft GB that was named after my best friend of 47 years. I jumped up to 16ft instead of doing a 14ft version, as I wanted a bigger boat that could be used for over night outings, and such. I may still make the 14ft version to fill out the design family to have a hull for every boat builder.

It took me about 10 models to get a final design that satisfied my critical opinion of this particular hull. All the earlier designs would have floated and made good boats, but I am very picky about the looks of my hulls and don't stop until I'm completely satisfied with the outcome. Each of the last three models hung on a string in my kitchen for a few days until I was either happy with it; I marked down the changes I wanted to make on the next version, and then use the last one for kindling in my wood stove. The early models are mainly used to adjust the lengths of the panel end points so everything fits. Then it's adjust the panel curves so that there are no “puffs of hollows” along the mating lines. That can be exasperating, as then I have to change the end points by small fractions to match them up again.

I had been working on two different versions of the 16ft hull. One with lower sides and more curve to the rails like the 12ft version has, but I wanted more free board to this hull so it could carry more weight. When sailing the 12ft version, you have to watch the heel angle to keep the water out as you race across the water. In my YouTube video, I give out a “yahoo” at one point, but you can't see in the video that the rail is only about an inch out of the water. So this hull is a bit more “pudgy” than the 12ft version and not as classic looking, but when you turn it upside down, there is still curve to the rails. As you see in the photos, you can use your hull to carry a big rock if you so chose, or about five people; but I will “Max Out” the people count to four. I did a tank test will five of my “people” sitting on one side, and I still had the top panel out of the water, so it will sit on it's side as well as it's bottom.

This is a design that I have not built a prototype hull to test the lofting from the design build plans, but after tank testing other previously built hulls, and comparing them with the launch photos and the way they sat in the water after being built. I'm confident that the waterline shown will be correct from the tank tests on this hull. I have also found that there are very few “tweaks” that I have had to make to any design while building from my computer generated plans. Any errors are usually in the 1/16” +/- range at a couple points during the lofting and curve smoothing stage. I would expect no problems during construction. Enjoy the boat.

With this hull I will be giving some ideas for a forward deck and maybe a small cabin in it, and some different types of seating than I usually do. I may rethink the daggerboard idea and go to a retractable centerboard in this hull. I have a design worked out, but I have never had a boat to us it one before.

If you want to use an outboard, I would limit it to one of the little 3hp models, or one of the Electric Paddle types. The EP's motor and batteries are light and have more than enough power to move this hull around the harbor, and boat launch.

This hull will also be CE/CLR balanced to use the new 84sq ft Pram Sail, gaff rigged design, that I worked with Bob Patterson from Neil Pryde on; and it should have more than enough power to make you grin as you zoom over the water. You can get it in Tan Bark too. ;)

I like all my designs, but have to admit that this hull has given me a big grin. Let me know what you think of the 16ft Granville Bay, and if a 14ft version is to your liking too. 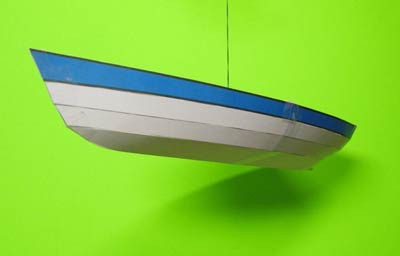