This hull will be the first one of the three 14 footers that I have finished the hull design for. The double ended Chocolate Bay hull, and the "wider" transom version of the Padilla Bay; I'm calling the Liberty Bay, will be out later when the time allows. Depending on demand, I may let the other two hulls "mellow" for a few years, as I have several other hulls that I am working on now that are more interesting. 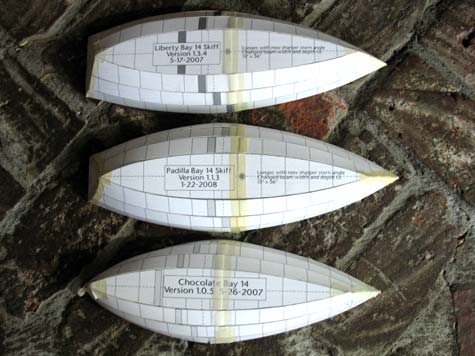 I got the inspiration for this hull, and the other skiffs, from reading a story in a very old Wooden Boat Magazine (July/August 1989 #89). The story was about some of the boats that were used by Polish Fishermen, and they were out racing against each other to see who's was the fastest. The story had some good shots of the hulls, and a couple drawings of how they were lofted up. They were using Sprit Rigs, and there was also a separate story in that same issue on Sprit Sails, and how to rig and use them. Seeing those hulls, and that rustic old style sail peaked my interest into seeing what I could come up with.

I started calling them "flat bottomed skiffs", as I thought that the term skiff refereed to any hull with a flat bottom. But there seems to be a bit of difference in what the term means, on which side of the "pond" you are on. So I went looking for "the answer" and found the following information on Wikipedia, and will go with their definition for Skiff. I usually refer to my round bottom hulls as dinghy's, and the flat bottomed one's as skiffs.

"In American usage, the term is used to apply to small sea-going fishing boats. The skiff could be powered by sails as well as oars."

"One usage of skiff is to refer to a typically small flat-bottomed open boat with a pointed bow and a flat stern originally developed as an inexpensive and easy to build boat for use by inshore fishermen. Originally designed to be powered by rowing, their form has evolved so that they are efficiently powered by outboard motors. The design is still in common use today for both work and pleasure craft."

Since this hull is not one of my mainly used for fishing styles, I will include all the sailing parts in the final build plan set. I don't think I will do any design work on a "set around the cockpit" type of interior. This will have a bow, middle, and stern seat, with a daggerboard trunk, and a normal mast partner for supporting the rig. The 64 square foot Sprit sail from Neil Pryde sails can be used with this hull too. I really like setting up this sail as a gaffer, instead of going with the normal sprit rigging. I find it's easier to raise and drop the sail without the sprit pole being in the way all the time. I can paddle or row away from the dock with the sail completely rigged up and laying in the cockpit, and just pull on the line that raises the sail by the luff, and the one that lifts the top pole, to set the sail and I'm off. 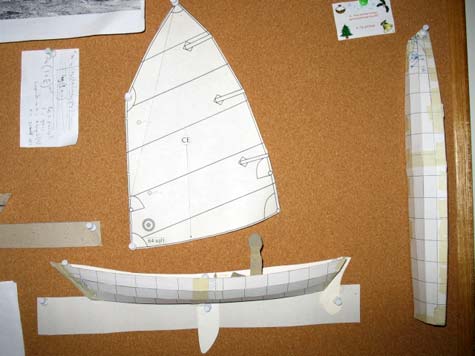 This will also be one of the designs that will not have a full loft and construction of the boat on my Youtube site. The models fit so well now, that I don't have to do a full build to show myself that they do indeed come out the way they look on paper and cardboard. I would look for the plans to be ready sometime next year. I hope. 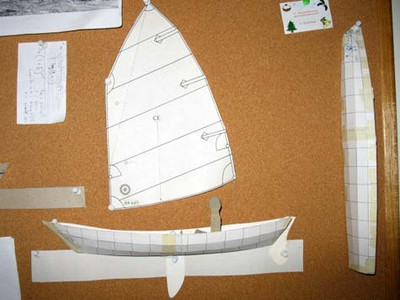