Hi everyone - I guess since I’ve been working behind the scenes on the business end of things here at Duckworks since the beginning of the year, it’s about time for me to introduce myself!

My name is Katie Malik, I’m the General Manager of Gig Harbor Boat Works, and by extension also now of Duckworks since we were lucky enough to acquire Duckworks as a sister company at the beginning of the year. I grew up around small boats – my parents Dave and Janet Robertson are the original founders of Gig Harbor Boat Works – and accordingly a ton of my childhood memories and my formative life experiences have taken place in and around the waters of Puget Sound.

That said, almost all of my firsthand boating experience has been in Gig Harbor Boat Works vessels, which are fiberglass rowing and sailing dinghies based on traditional small craft from the age of working sail. When we acquired Duckworks' immense catalog of boat plans, I had to jump right into the deep end to learn about the vast world of wooden boatbuilding and small craft designs!

When the Salish 100 came through Gig Harbor in July, I thought it would be the perfect opportunity to see some of Duckworks most popular wooden boat designs up close and personal, and meet as many of their makers as I could!

Organized by the Northwest Maritime Center, the Salish 100 is “the largest organized small-boat cruise in North America.” Over the course of a week, the fleet travels the length of Puget Sound from Olympia to Port Townsend with overnight stops along the way. The entire course is 100 nautical miles, and since the stops are 10-16 miles apart along the way it’s broken up into reasonable chunks and everyone can go at their own pace.

Jesse Wiegel, one of the event organizers, graciously invited me and my Dad out to the Salish 100 dinner in Gig Harbor on Saturday night. Before dinner, Dad and I rowed out in my little Gig Harbor 10’ Navigator to cruise by all the participating boats sprinkled around the docks. Then at dinner, I had an opportunity to chat with many of the owners about their boats and how they personalized them for the journey. Below are a few of the participating boats I spotted which were built from plans we have at Duckworks! 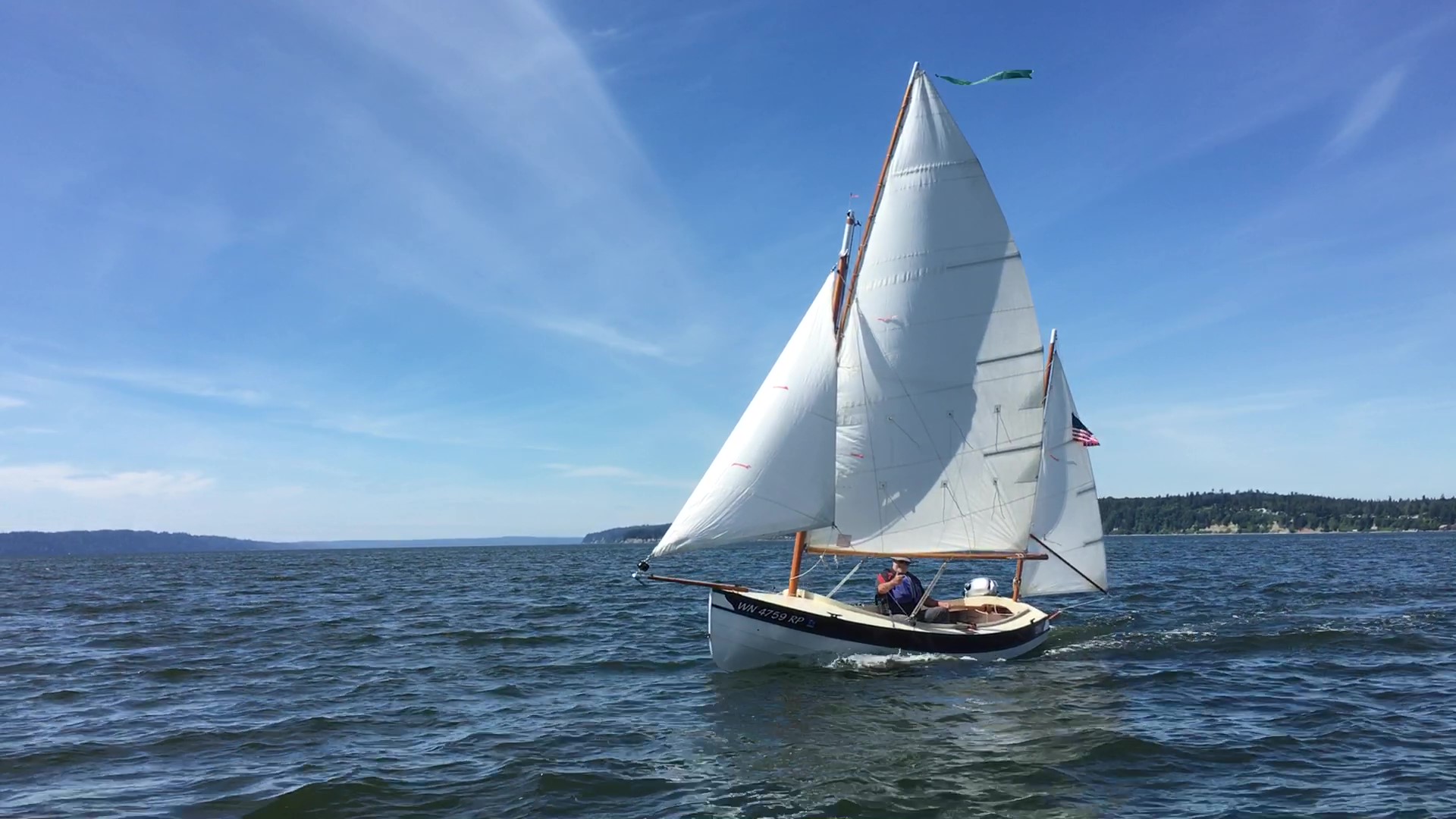 Built by Joel Bergen, Ellie is a stunner, well-built with some very well-thought-out details. Many of you will already recognize Ellie, as she’s often spotted around Port Townsend, at the Wooden Boat Festival, in Small Craft Advisor magazine, and elsewhere. Joel gave us a little overview of Ellie from the dock, showing us the beautifully handmade mast, and his custom bunk boards that lift right out of the cockpit floor.

Joel’s got a fun blog detailing his entire project, very much worth checking out if this is a build you’re considering, at navigatorjoel.blogspot.com. We also have Joel to thank for the Full-Size Templates of John Welsford designs we have available here at Duckworks! 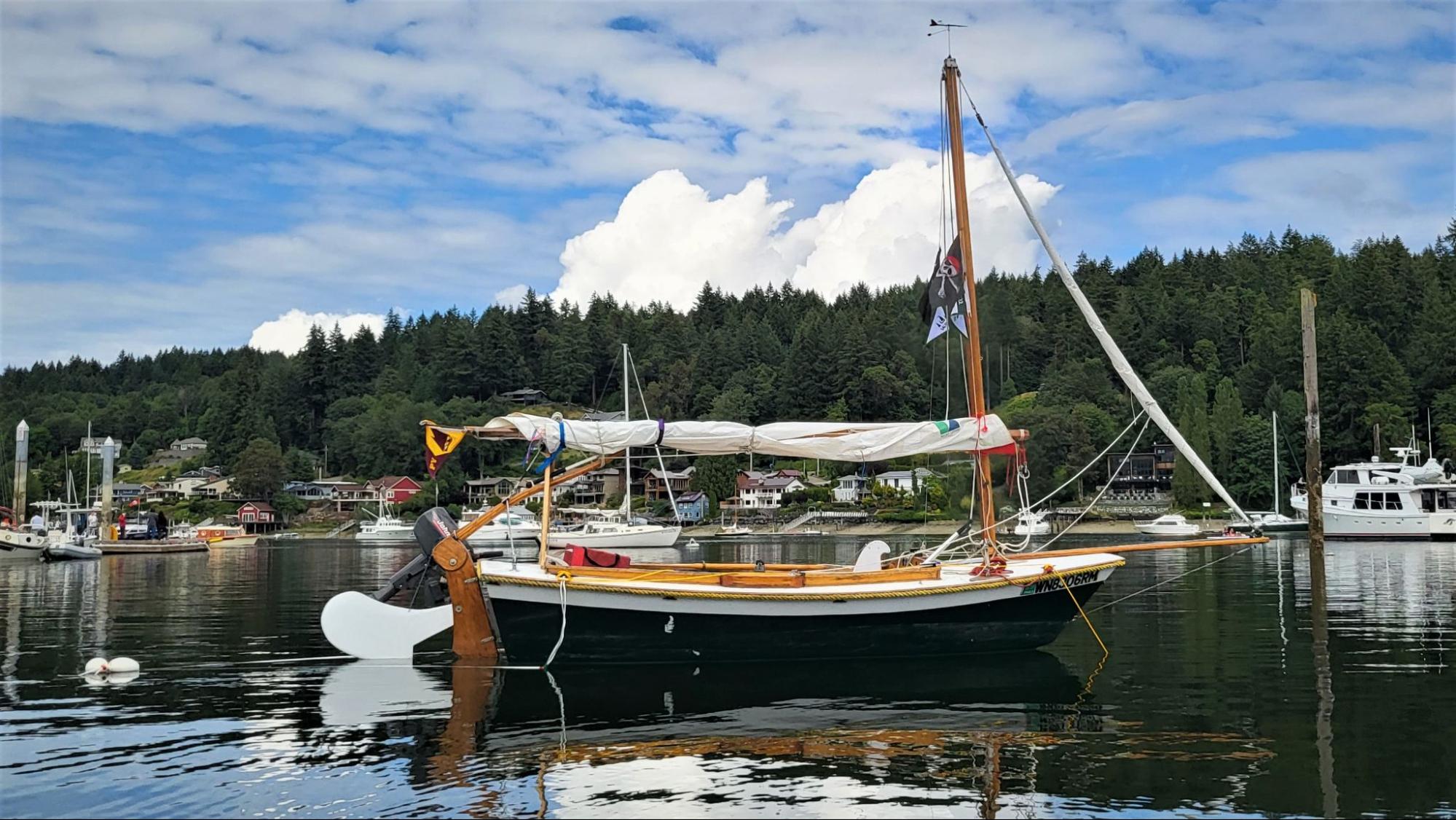 I was delighted when I saw this eye-catching Pelican sailboat anchored out in front of the Gig Harbor public dock at Jerisich Park. Pelican plans have been flying off the virtual shelves at Duckworks this year, so I was itching to see one “in the wild.” I caught up with the Pelican's skipper Trip Slaughter at dinner and chatted with him about the boat. While Trip didn’t build this Pelican himself, he’s really been enjoying sailing her, and this was his third time sailing the Salish 100 in this particular vessel! 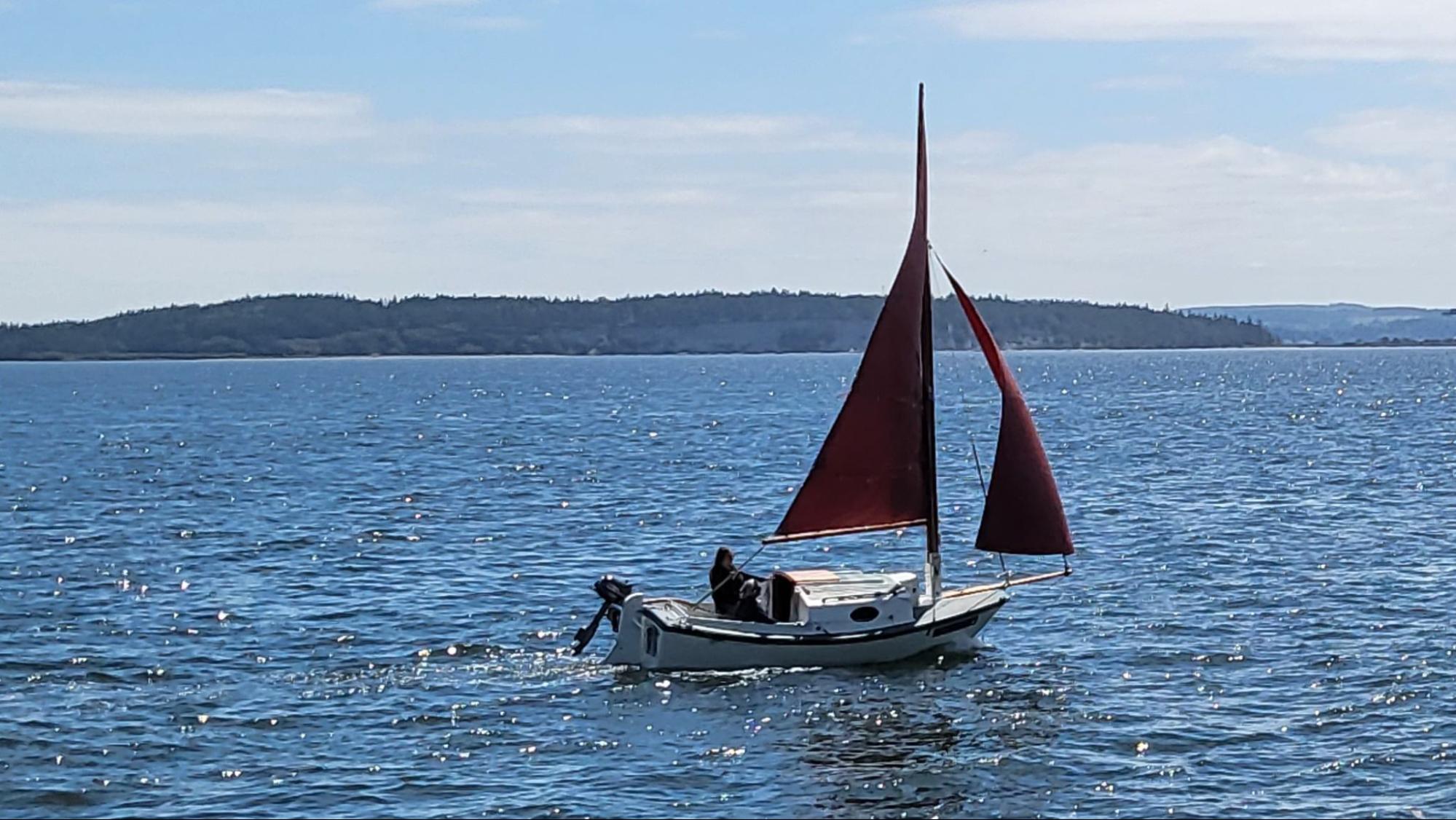 Toucan is a 16’ Great Pelican, captained by Diana Armistad, who came all the way out from the Midwest to join in the Salish 100!

The Great Pelican is the original Pelican’s big sister, with a few more feet of room and a cuddy cabin to give just enough space for a berth, making it cozy to sleep aboard. Fun fact, there are four “siblings” in the Pelican family, and you can find them all at Duckworks: the 12’ San Francisco Pelican, 14’7” Pacific Pelican, 16’ Great Pelican, and 18’ Super Pelican. 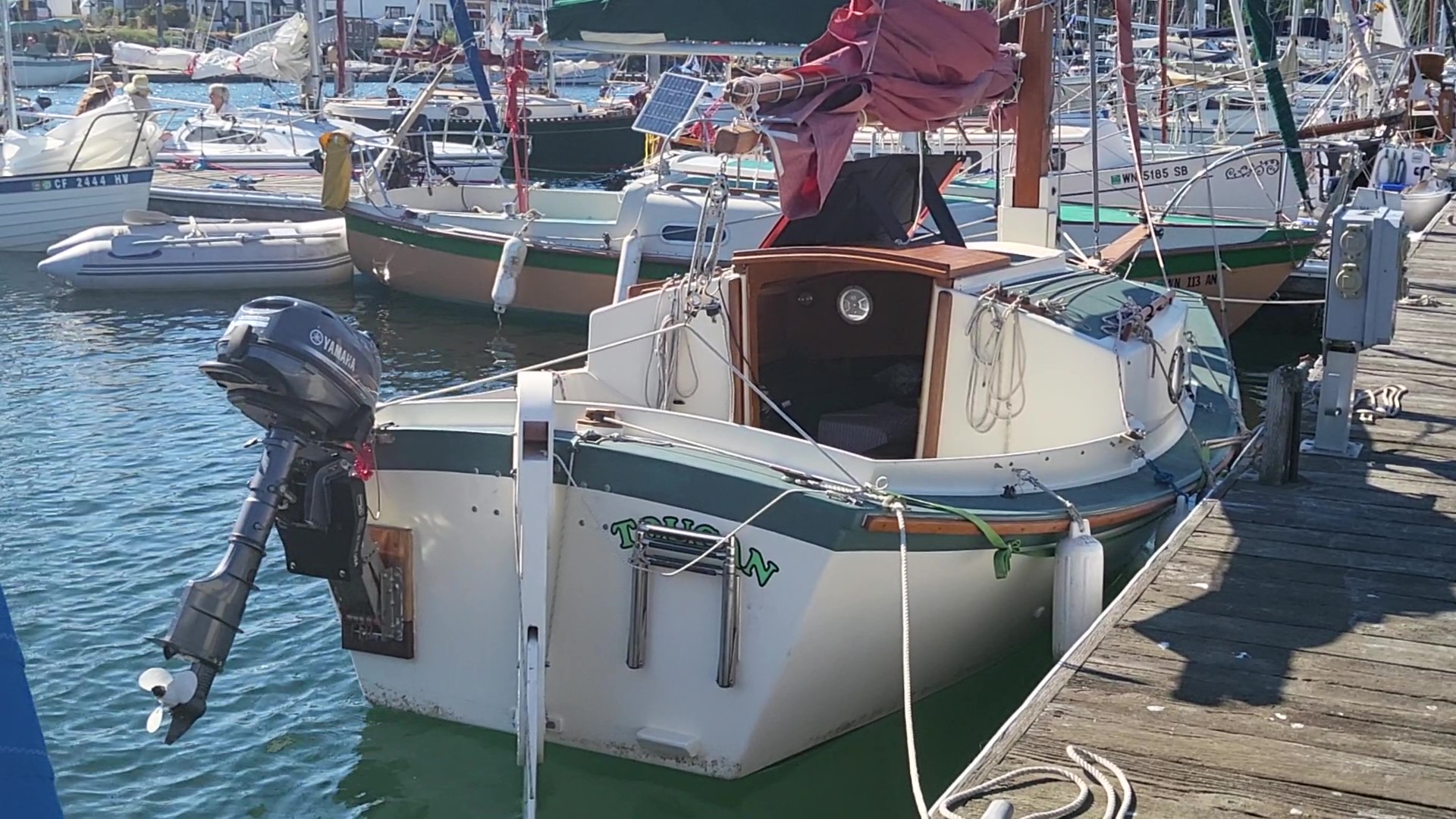 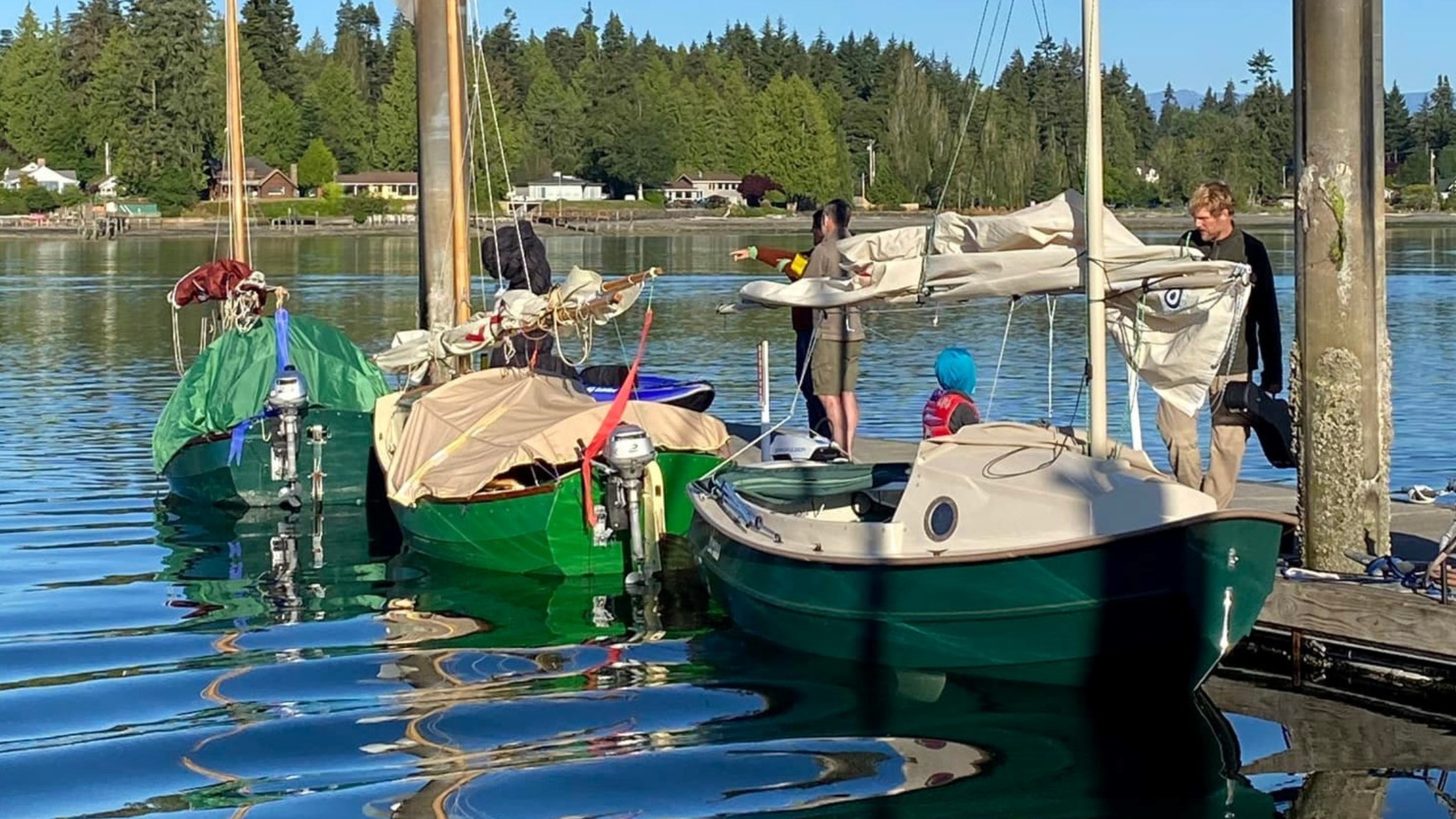 I’m told there were a half dozen Scamps participating in the Salish 100 this year, which makes a ton of sense – it’s really the ideal opportunity to make use of this capable microcruiser. About half were home-built wood boats, and half were the fiberglass version from Gig Harbor Boat Works. It was actually my first time seeing fiberglass and wood Scamps all together at one time, and it was fun to see all the variety of colors and customization that people put into them.

Of particular note was a pair of Scamps that were built simultaneously by two friends who collaborated together, Todd Pollard and Jennifer Harold. Their Scamps “Samwise” and “Arwen” were built on a Hobbit theme… after all, if a Hobbit built a boat, it probably would come out looking rather like a Scamp! (I chalk that up to John Welsford’s New Zealand influence.) 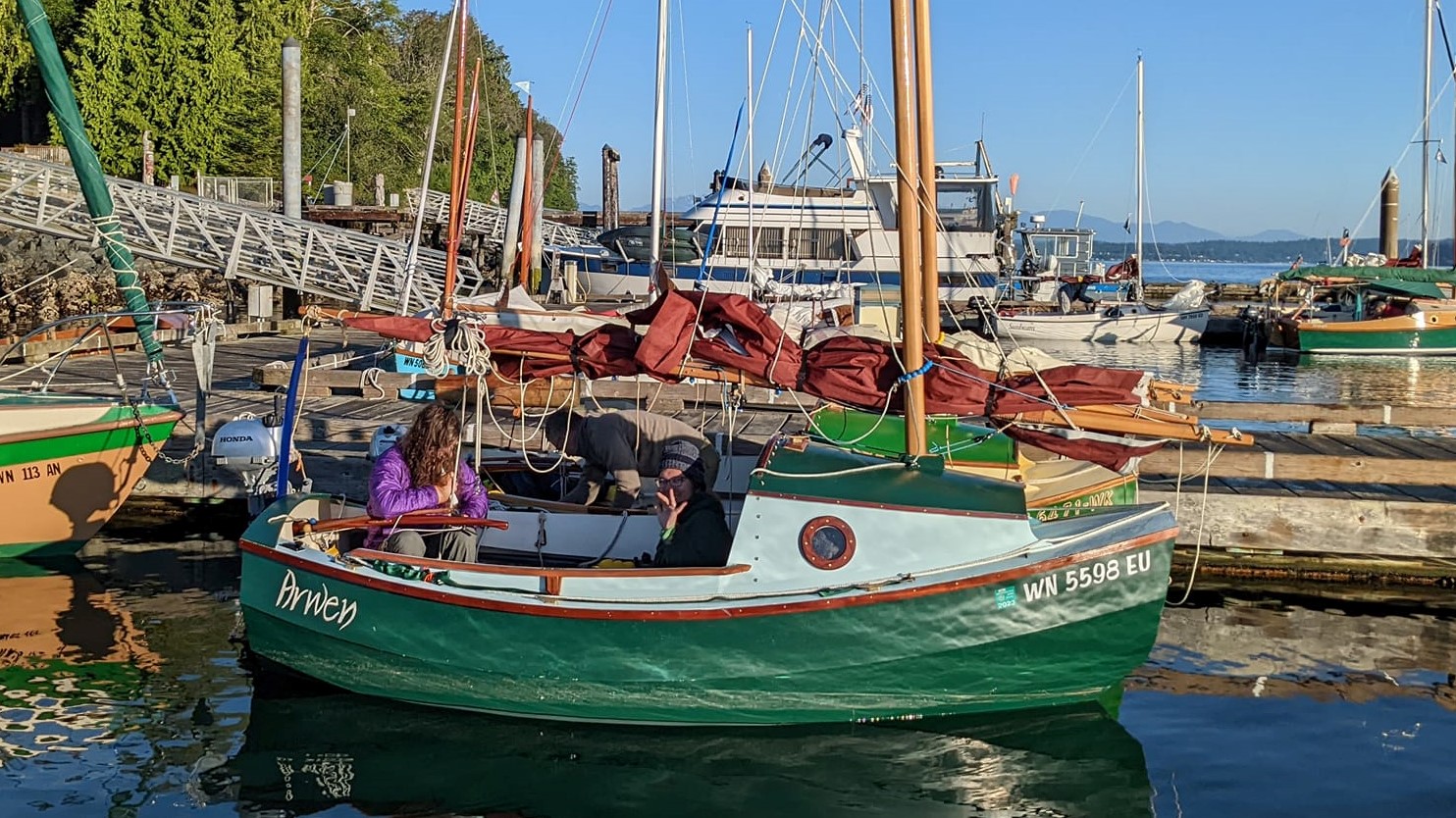 Arwen and Samrise rafted together at the dock


If any one of you has ever considered joining in the Salish 100 and been on the fence about participating, based on what I saw it’s well worth the effort. This bunch was warm and welcoming, eager to show and tell their boats, trade tips, and generally support each other along the way. Learn more about the Salish 100 event here, and start making your plans for next year!