I have decided to make plans for my sailing canoe "Beth" available through Duckworks, but there is a serious caveat: This boat is only suitable for people with a reasonable sailing background. Someone who has fun racing and planing around in a Laser is just the type who will enjoy BETH as well. Such folk know that as the wind gets up they are going to risk getting wet.

"Beth is simply the most elegant small squareboat we know. She was given the "kamikaze" label by those who watched her soar out over Lake Alexandrina in a big wind, with a white rooster tail matching the white knuckles of the white-faced Michael Storer on his first major proving run.

What that run proved was that all the cynics were wrong! Beth and Mike appeared at the other side of the Lake unscathed and untroubled, and early. Here's the Storer description of her....." Tim Fatchen - Square Boats

I drew Beth with a real intention to build her for myself - my first "real design" after years of drawing boats on every spare piece of paper that came my way. There were lots of different ideas that I wanted to try out in a light, cartoppable sailboat:

* the boat to be crewed mostly by one, but with enough carrying capacity for camping gear or a light person for company on daytrips

* narrow beam. It's not necessarily weight that makes a boat hard to handle on land on one's own, but bulk. Also, I was curious just how far the beam could be cut down without resulting in constant capsizing. 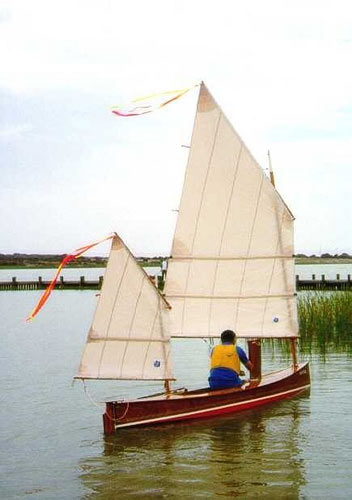 Around the time I was framing these ideas, I discovered some pictures of American racing sailing canoes from around 1870. Long, narrow and light - these were the fastest machines of their era. With their lug yawl sailplans and handsome sheerlines, they had the look I was after.

Many epic voyages were made across the breadth and down the length of North America in these and similar craft. Captain Frederic Fenger sailed his Yakaboo through the West Indies from Granada, up through the Windward and Leeward Islands to Saba. Many of the passages between islands were 40-50 miles.

Although I was unlikely to go to these extremes, I still wanted the boat to be capable of camp cruising, rather than just being good for racing. 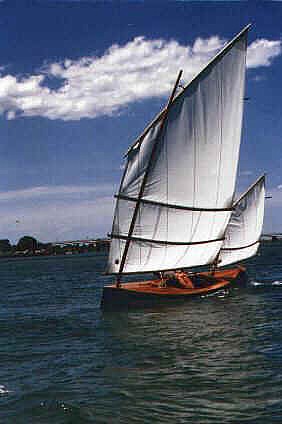 When it came to the detail design, there were more ideas I wanted to try out.

* I wanted to see just how small it was possible to make a rudder and still have control! American E scows tended to tiny rudders, and Fenger's Yakaboo had no rudder at all. In the event, I went a little too small. Current plans have a slightly enlarged rudder with a revised foil shape from the original.

* I had been very impressed with American designer Phil Bolger's "Box Boats", with their flat bottoms and hull sides set at 90 degrees. A hull shape of this sort would certainly cut down my labour - but would the boat sail well and look good? There was one way to find out!

* Old fashioned sails with modern technology - I'd been brought up on modern high performance dinghies. Old fashioned rigs - gaff lug and sprit - are pleasant to the eye, but in my experience they sailed like dogs. Yawl rig also had a doggy reputation; "one mast is fast" had been drummed into me. But what if a traditional rig was set up using modern sail controls and fitted to a hull with high speed potential?

So Beth was designed as a lug yawl sailing canoe, with simplified hull shape, a narrow (32") beam, and length designed to match available plywood sizes. 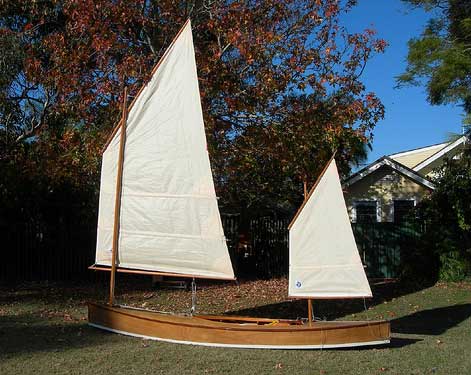 In working out the sail area, all the antique racing canoe information I was able to find suggested sail areas of around 67 sq ft. I thought that my box hull would have better stability than the older round bilge types, that sails of Dacron would stretch a lot less in strong winds than cotton, and finally that sailing techniques had improved in the last 120 years (!) So I took a blind stab and went for 85 sq ft. I did draw the sails with a couple of sets of reef points...

The building process started off with a bang. I spent a long night making up the side and bottom panels and bulkheads. Two days later, David Wilson and I assembled the hull shell in around half an hour! Advantages of the simplified hullshape. David was as startled as I at how fast it had all happened, but dampened my enthusiasm a bit when he christened it "The Hatbox".

Building then slowed to a more normal pace as conventional decks were fitted, and slowed as six timber spars were tapered and rounded. 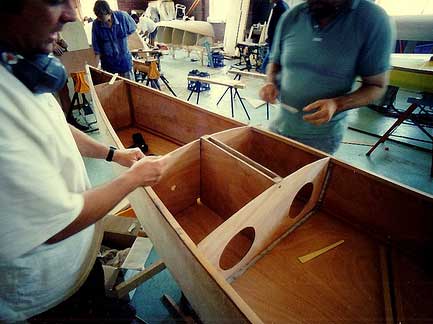 Launching day came round and we put her in at the municipal pond at Mount Barker, in the middle of a Small Boats day. The wind was very light, so there was little chance to get a feel for her capabilities, although her high initial stability was easily demonstrated!

Over the next several years, I sailed Beth extensively in New South Wales, South Australia and Victoria. She has accompanied me on most of my holidays, used mostly for daysailing with occasional fun racing thrown in. Beth is the first thing unloaded at holiday destination and last packed when leaving. She always draws a lot of interest from other sailors particularly when they realise her speed is well beyond that of other "antique" boats.

But the biggest advantage to me is that I can easily handle her by myself on shore - I do not have to be continually asking other people for a hand to move her about.

Beth is fast, performing at a similar level to a club-racing Laser dinghy. She is a little slower upwind but requires a much smaller physical effort. As the waves and wind get up, she does comparatively better as the waves tend to slow her a lot less than the blunt shape of the Laser. Downwind, there are no excuses as she will pass almost anything picking up and surfing down the smallest waves.

The rig is particularly forgiving when gybing in strong breezes. In 25 knots I would expect to ditch a Laser about one in four gybes. With Beth I would expect a capsize about one in 20 gybes. Part of the forgiveness seems to be the flexibility of the rig (the "boing" factor), and some is due to the fact that the balance lug mainsail is not all on the same side of the mast. 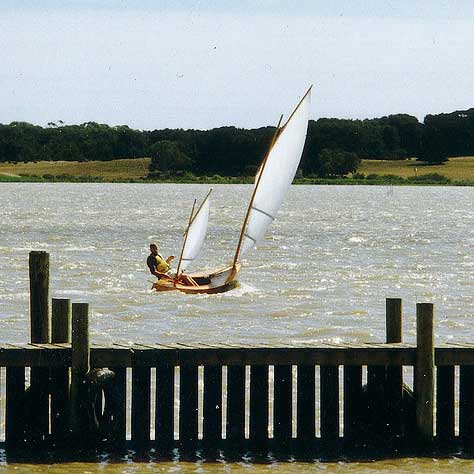 The mizzen is interesting to handle. It can be trimmed to provide a light helm upwind. If oversheeted in a breeze, it stalls the rudder which kicks up an impressive roostertail. But despite the reduced rudder grip, the boat does nothing dramatic, with the rudder biting in again as soon as the mizzen is eased a bit.

Beth turns out an unusual mix of the old and new - the performance of modern boats but the manners of old boats! Just look at all the things that conventional wisdom would say are inefficient: lug sails with the mast interfering with airflow on one side, flat bottom, no hull flare, sails laced to spars, wooden spars, small rudder, narrow beam, tiller lines, yawl rig, pointed stern. Yet her performance is up there with a modern sailing dinghy.

Beth has a couple of minor limitations. In light airs (glassy water with no ripples at all) she refuses to sail much on port tack, as the minimal airflow over the lee side of the sail is upset by the mast. It's faster to paddle when there's no wind - remember, she is a canoe. In more wind, she sails almost identically on either tack.

In a sloppy and confused chop, such as the traffic-churned Sydney Harbour, there is a tendency to wallow a bit. She deals with aplomb with a very large chop, as for example Lake Alexandrina in South Australia, provided the chop is all coming from the same direction.

Her performance in a beam reach could be a bit better - I cannot get my weight far enough outboard to get her really up and going. She's still fast but there is a definite feeling that she could go a lot faster still if I was about four feet taller... (See blue box at bottom of page).

Finally I would only really recommend Beth to people with a reasonable background in competitive dinghy sailing - if you can handle a Laser in a blow without getting into a mess you qualify! AND... the good side - you don't need to be as fit as a Laser sailor. Beth is a fast, light, responsive boat - you need the skills to handle her. If you don't quite have that level of skill but live in an area with predominantly light winds, then she would be great light weather, sunny day boat.

A couple of aspects have been modified in current plans in light of extensive experience with the prototype. In my original drafting, there were sudden curves in side panels where the bow merged into the mid-section and where the mid-section turned into the stern. Sometimes these curves resulted in embarrassing loud sucking sounds which, apart from personal suggestions, implied a lot of drag. The curves have now been smoothed out!

Based on prototype performance, the rudder has been enlarged slightly and the foil section improved, the diameter of the mainmast increased slightly, and the centreboard lengthened for better upwind performance.

Plans are highly detailed, and fully dimensioned. That means no poring over them with your scale rule and getting scale conversions wrong: the measurements you need to know are written in clear type and in the area that you are looking at.

For a bunch of photos of Beth, Michael Storer has posted this album on Flickr 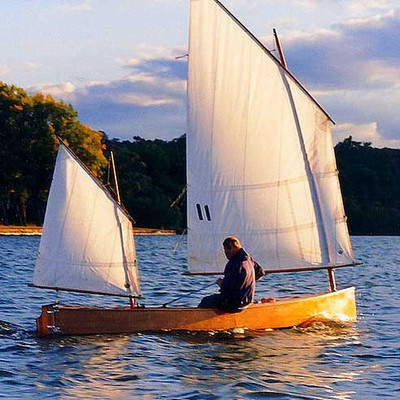