SKU:
JM-VOLE
Availability:
not available at will call
measurement:
imperial

Vole evolved from WeeVee. She is a lot less extreme in the deep V department, but more extreme in the beam. In particular Vole should be a lot better as a knockabout sailer.

Vole is a large dink. In particular Vole is short enough to be called a dink but is wide enough to maybe twice as long.

Dinks have a problem carrying weight simply because they are so small. If you weigh 200 pounds and your boat weighs 100 pounds, the total weight will equal about 5 cubic feet of water. It may not sound like a lot but there are very few dinks that could handle it well if they are streamlined at all underwater. The streamlining usually reduces the underwater volume, compared to a square ended prism with the same cross section, by half (the prismatic coefficient). Then if you don't want a flat bottom, thinking it might be slow and clumsy, you can reduce the available volume again by half by using a round or vee bottom. So then when you start sizing the boat by saying it needs an underwater box (equal to draft x beam x waterline) of almost 20 cubic feet to carry that weight. Then a short hull with 7 feet of waterline and 4 feet wide will draw about 9" of water. There is no getting around this type of figuring, al least not on this planet and in water.

So Vole is 5' wide at the top. She has a shallow V bottom which will make her go a lot better than a dead flat bottom in these proportions. The extra width will make her fairly stable and roomy for a dink, but she'll be too big to use as a tender and maybe clunky to cartop. I would expect her to sail pretty well, even with a crew of two. I gave her a sharpie sprit rig which might be the best cheap and simple sail rig. But you have to accept the 16' mast on a 7-1/2' hull. Don't expect to be able to reboard a boat like this in a capsize. There is usually no room for both flotation and crew. Any open boat without substantial flotation that swamps will be about hopeless.

Vole is made from three sheets of 1/4" plywood with taped seams. No jigs, no lofting. 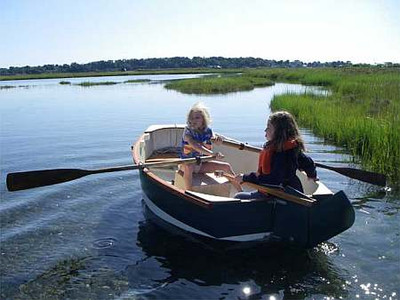