SKU:
JM-RAIDER
Availability:
not available at will call
measurements:
imperial

Norm Wolfe built his Normsboat to my design so we were acquainted. He visits the Baltic countries regularly and had participated in a "Raid" in Finland and was going to make it a regular thing, maybe with his own boat. A Raid is a pseudo race with boats that row and sail, over a fairly long course taking several days. But the racers don't sleep in their boats. Instead they do a stage each day, sleeping and partying on shore in nice prearranged places each night. So the "racers" need carry no gear except what they need during the day and a rescue boat is always nearby. I think each boat must have at least two crew. So what sort of boat do you take? A true sailboat will be helpless in calm and a true rowboat will get left behind in a breeze. Norm wanted something that would row well but convert quickly to sailing and even do hitches with oars and sails together at the same time. He wanted four oarsmen.

I sat with him at McDonald's one day and we sketched this:

The idea was a boat long enough to take four at the oars, with a folding rig that could be left up while rowing or quickly taken down and up again as the winds advised. I suggested a V bottom as it would row the best and beaching was not going to be a problem. The lugsail was lifted from the Normsboat. (I see we were thinking at the time of offset oarsmen each with a single long oar but it was first rowed with pairs of oars. I have been told that rowing with single long oars is preferred in rough water but that way you will always need an even number of oarsmen.)

The plan was to build in Europe and leave the boat there, so the drawings had to be in metric dimensions. I had never done metric because I found when I first started that metric tapes and scales were not commonly available in the US, still aren't, so I stuck with English measures. But I did draw this one in metric and was always worried about real goofs going unnoticed by me. I don't know if there were any. The boat was built in Estonia, I think, in the back of a car repair garage by a non boatbuilder. But that is OK. My boats are designed to be done that way. I never heard from the builder concerning any mistakes although I suspect he is the type of guy who forges ahead regardless and gets it done. I thought he did a fine job and I should say that there are some major twists in the panels in the bow area to deal with. I can see small changes from the plans but nothing I might not have done myself. He has a slotted gunnel. And he used a modified flag pole to replace the wooden one shown on the drawings. I should mention here that I am pretty sure a buoyant wooden sailrig is a safety factor for a sailboat in that it will prevent a capsized boat from turning turtle by my experience. I still say wood is the best material for a small sailboat. But if you have the proper flagpole at hand......

I used my usual pivoted leeboards, with one hitch to the usual. I thought she needed two, one on each side, to have enough lateral board area in a tough slog to windward. In the photos you can see the guards on the gunnel.

The Raider was finished in time for the 2008 Finnish Raid. Norm jetted over a bit early to sort it out or at least get used to it. He took along his Normsboat sail. The race was apparently its first time in the water, more or less. Here it is being paddled out for a sail: 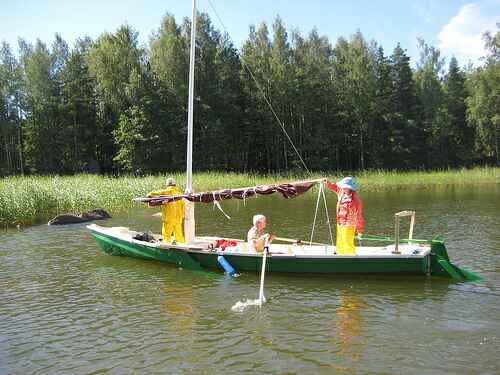 And here it is with some of its rowing crew: 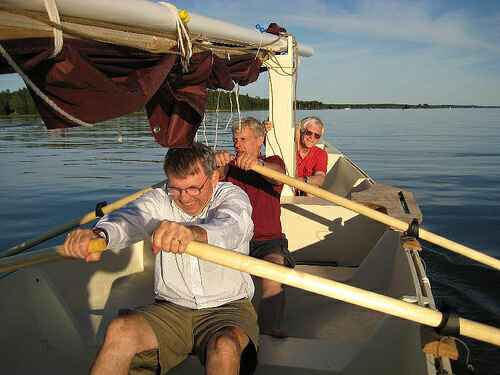 Norm assures me these are hardy men, Vikings all! That is Norm, I think, in the bow seat with no oars urging them on. Can't you hear him yelling, "Come on! Pull! Pull! Break your backs!", just like in Moby Dick. Looking at the photo I thought they might do better by sitting a little higher on say a flotation cushion and maybe with longer oars, but you never know. I gave each man a meter of space as I recall and that looks to be enough. You can see the folded rig is OK. Norm thought he might revise it to fold a bit lower.

Well, I can't tell you how Norm and crew did cuz I don't know. But they did it! 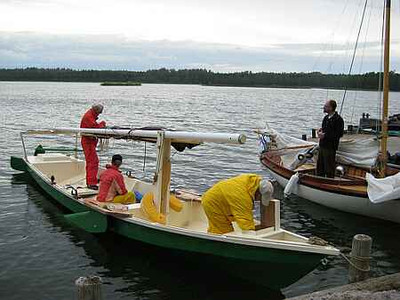