From article in Small Craft Advisor: After reviewing and comparing four dozen pram designs, one stood out as a personal favorite, ideal in size and capabilities for our own camp-cruising adventures, as a tow-behind dinghy that'll accommodate two adults and their gear.

This pram was designed by naval architect William (Bill) Peterson of Maine, back in the 1970s. Bill and his well-known father, yacht designer Murray G. Peterson, had built a beautiful little 28-foot schooner, Susan - considered Murray G. Peterson's greatest design achievement - and shortly before his death, the elder Peterson had described a pram he planned to design and build for the schooner. Following his father's passing, Bill Peterson undertook the pram design and had their boatbuilding crew do what he called "knitting work" on the pram, cutting and fitting parts during slower times in the shop. The resulting pram was a true gem - lapstrake-planked in mahogany, to match the schooner.

Bill Peterson has maintained Murray Peterson Associates since his father's passing. One of the prams was acquired 34 years ago by Small Craft Advisor reader George Kruzynski of British Columbia. George bought the little 6' 8" Peterson pram built by Peter Legere in Squamish BC. Peter built the boat, one of a series then called "Willow Leaf Pram", with Bruynzeel mahogany, red oak transoms,white oak frames, skeg, inwales and knees. Silicon bronze and copper fastened the dinghy and it has been cherished ever since.

Long story shorter: After being impressed by George's pram, then learning more about the design from Bill Peterson, we were happy to be appointed as an outlet for some of Bill Peterson's small-craft designs. Through Duckworks we currently have large-scale plans available.

Below is a photo of George Kruzynski's 34-year-old lapstrake pram, along with a computer-generated illustration of our new featherweight Portage Pram kit (our stitch and glue kit variation on the Peterson Pram). Dimensions of the kit pram will be identical to the original lapstrake version: 6' 8" overall length with a beam of 42". 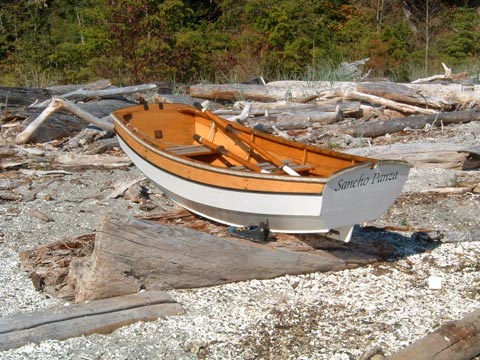 The Peterson Pram has received excellent design reviews over the decades, from owners and experts in small-boat design. The late Dick Wagner, founding director of The Center for Wooden Boats in Seattle - a critic who generally distrusted stubby boats - penned the following comments in a letter to one of the Peterson-designed pram's owners, George Kruzynski of North Saanich, B.C.:

"I've always preached that a short, fat boat cannot be good at rowing, but yesterday I rowed a pram that was 6' 8" long and I liked it very much. This little Peterson-designed pram was a great boat, despite my dogmatic prejudices. It accelerated quickly, tracked better than a Gloucester Gull, carried well between strokes and made no wake at hull speed. I don't know why it worked so well, but it sure did! This little pram is a hell of a good boat!" - Dick Wagner, The Center for Wooden Boats.

Quite an endorsement for the Peterson Pram...

Plans include one 24 x 36 sheet with necessary drawings, measurements and offsets, as well as a 5-page building guide that includes strong back drawing.

much took care of herself through wakes and seas. - Cheers, John Acord 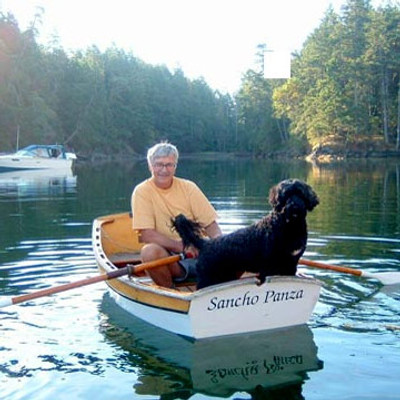