SKU:
JM-PAULSBOAT
Availability:
not available for will call
meaurement:
imperial

I had a request from Paul Moffitt, of the famous sailing Moffitts, for a sailing canoe. Now, a "sailing canoe" can mean a lot of different things. But to me the sailing canoes that you read about from the late 1800's were what we both had in mind. I had always put off designing one because I had the idea the usual sailing canoe design is too wide to be good with a paddle, and too narrow to be good with a sail. Many of the old classic sailing canoe designs were actually small decked over rowing boats that were wide enough to sail with some stability. I guess there were still called canoes because of their double ended shape and perhaps because they had recently evolved from true canoes which were rigged with small sails.

Anyway, it was going to be a compromise. Paul also wanted some capacity to carry some camping gear. So I drew Paulsboat. It was really based on my Larsboat which in turn was based on my Toto which in turn was based on the Bolger/Payson multichine canoe, etc. To get more sailing stability and more capacity Larsboat was widened from 30" to 36" and the bottom plank also widened 6". I gave the cockpit a 7' long open space with the idea that the skipper could camp inside the boat, which by my experience is quite superior to sleeping outside. For one thing setting up a shore tent will usually quickly bring down the law almost anywhere and sleeping inside discretely will not. I slept in the smaller Toto many times. Anyway, the cockpit is large enough to float two adults and is between buoyancy/storage chamber fore and aft. Access to these chambers might be difficult. I've shown them with large deck plates in the bulkheads but you likely won't be able to reach way down in them. I've noticed many folks put several smaller deck plates in the decks, as Paul did, to allow access. The deck plates also allow for airing of the chambers and if you ever build in a closed box and don't allow for airing you can expect rot very quickly. 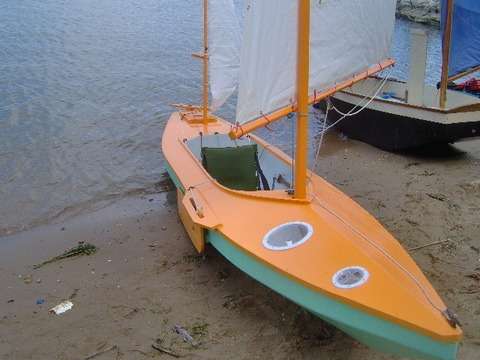 The sail rig was pretty well copied from the old sailing canoes which often used something similar. I stuck with my usual leeboard for lateral area and placed it such that the boat should handle well under main sail alone. The rudder was something to think over. Many of the traditional canoes had a tiller with complications used to get the tiller to clear the mizzen mast. I wanted to avoid all that since it usually means some metal forming and welding and that will turn off many builders quickly. What Paul wanted was to be able to steer with pedals and had aquired from Duckworks some plastic kayak pedals where the pedal did not pivot but could slide in a groove a total of 14". Well, let me back up a bit. The rudder drawn simply has a tiller horn on each side, each 12" long. That might sound long but in reality it would be like steering with a 12" long tiller and then it seems way short. The idea was to tie a line to the horns that looped around the cockpit through pulleys forward such that you could steer with your hands by pulling on the line. Not an uncommon idea. The downside I thought would be that at times you would hardly have enough hands to steer and work the sails. So Paul got those pedals and installed them connected to that steering loop. He says it all works fine and he was able to reduce the length of the rudder steering horns. But don't give up on the idea of the continuous loop around the cockpit. With the loop you could let your passenger steer as you take a nap.

We pondered a bit about what would happen in a capsize. With the decks and flotation chambers it should float high with little water inside but getting back in could be a challenge. I am pretty sure you should prepare, and test, a stabilizing system which uses a float attached to your paddle which is somehow secured across the cockpit to steady the boat enough to allow you to enter over the side. Nothing new about that idea. You probably need to be somewhat strong and nimble. 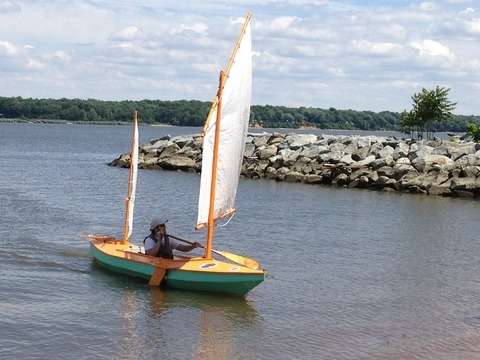 Paul has been paddling with a single paddle and reports no troubles. Having the pedal operated rudder would be a big plus especially with the single paddle. I have a feeling we did a good job compromising on the width of the boat. 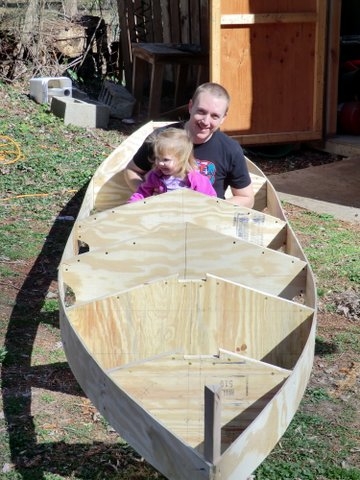 Construction is the usual taped seam requiring six sheets of 1/4" plywood. It is going to weigh a bit, no getting around that, but Paul has been cartopping without trouble.