SKU:
JM-HCSKIFF
Availability:
not available for will call
measurement:
imperial

HC Skiff is a rework of a "typical sharpie skiff" that appears on page 101 of Howard Chapelle's great book AMERICAN SMALL SAILING CRAFT. I can almost say that if you own only one book about small sailing boats that this is the one to have. The lines of my version are straight out of Howard's offset table. By today's standards it is a long narrow hull, 18' long and about 4' wide on the bottom. The stem rides about an inch above the water, then the bottom goes straight to the deepest point of the hull at about half the length of the hull. Then the bottom sweeps way up above the waterline for a very high and small transom. There were working hulls. Heavy loads could be carried without immersing the stern transom which is always harmful to a boat with no motor. You put everything in the stern and the stern still stays clear of the water. I think a hull shaped like this is little improved upon by any modern flattie skiff thinking. Chapelle said the shape was common all along the East Coast from 1860 to 1900. The prototype shown here was built by Dan Roach of Danvers, Massachusetts, very close to where Chapelle found the original boat he surveyed. Dan wrote quite a bit to me saying it was fast and handy and easily carried his family including the dog. (I'd quote what he said but I lost his email in a computer accident. So will somebody tell me why they put the "empty file" button right next to the "send message" button??) 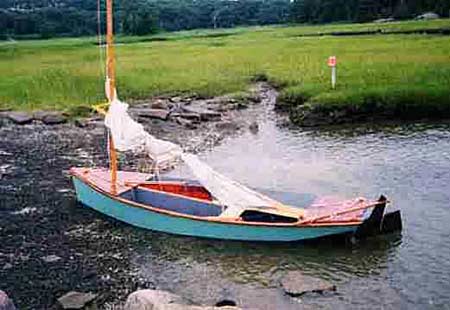 I used modern plywood construction on HC Skiff. The old boats were nailed together from 1" boards. Then they were left outside in the water until they died. They must have been very heavy both in their construction and in their soakage, not to mention the clams and oysters. My version uses five sheets of 1/2" plywood and five sheets of 1/4" plywood and will weigh a fraction of the original. It's all done with prefab parts and no jigs or lofting.

I had to tinker with the sail rig which was of the same style shown here but at least 50% larger. On the heavy old boats that might have been OK but I'm sure it would be way too much for the lighter plywood boat. I kept the large centerboard. I added hull air boxes bow and stern for a chance at self rescue after swamping. Also added some benches where the original boat was wide open from stem to stern with three simple thwarts.