SKU:
JM-DORADO
Availability:
not available for will call
measurement:
imperial

Dorado is a Southern Hemisphere constellation and also this boat designed for Ashley Cook in New South Wales. The idea behind it was for a rough water power boat with a sleepable cuddy cabin. We started with my Frolic2 sailboat (which itself evolved from the Toto canoe) and straightened out the stern lines to adapt it for planing power. After mocking it up Ashley said he and family needed another 3" of headroom so Dorado B was born and built. The plans show it both ways. I should add that even though Dorado started out as a modified sailing hull, it probably would be a terrible sailer just as Frolic2 would be a terrible power boat on plane. The two worlds just don't mix and the idea of "just hoisting a simple sail" on Dorado is bound to be a sure loser both because it will sail poorly and because you will lose the simplicity of a straight power boat. Not that the idea isn't worth more study. It would take a special person to do all the tweaking involved with making the two-way boat work well.

The shape works! Ashley has been running DoradoB into the rough stuff. In the above photo he is off the east coast of Australia with nothing but ocean between him and New Zealand. He says the big curling wave to his side is a permanent fixture and fatal to boaters trying it. He is using a new 30 hp two stroke motor which still is in its break in period. The Coast Guard would say that is the max for this hull. With the 30 Ashley reports cruising at about 20 mph with two adults on board. As an aside I should mention that in boats like this one needs to pay attention to the prop specs to prevent the motor from going over redline at full throttle. If the usual prop is for a heavier and slower boat then I would expect the motor to rev too high at full throttle in a lighter faster boat. The idea is to select a prop with a pitch that will put the tach on the red line at full throttle. 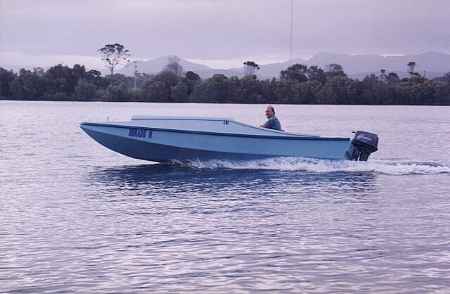 The hull is made with taped seams needing two sheets of 1/2" plywood and eight sheets of 3/8" plywood, a total of about 400 pounds of wood. I would expect the stripped hull to weigh about 500 pounds with framing and fiberglass. I would add at least 150 pounds to that for a motor and its gear which is why I estimate the empty weight to be about 650 pounds. Add two adults and fuel and now you are around 1100 pounds total. The old rule for motors on planing powerboats is a horse for each 50 pounds so if you havea 25 horse motor you will be able to cruise this boat at 2/3 throttle. I would say 15 hp is the minimum you might use and expect to plane, even then you must stay very light and run near full throttle. 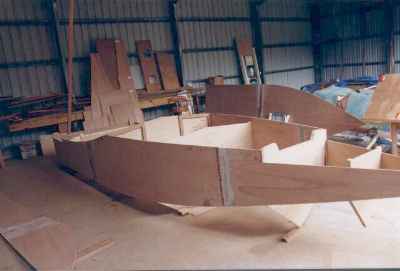 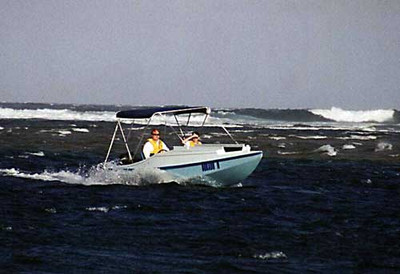