SKU:
JM-AF2
Availability:
not stocked in warehouse - mailed by the designer
Measurement:
Imperial

AF2 is the ancestor of both the AF3 and the AF4. The prototype was built by Richard Spelling of Sand Springs, Oklahoma.

AF2 is almost 5' longer than AF3, and is 6" wider and deeper. The result is a boat that is a bit more of a cruiser than a day sailer with more headroom in the cabin. I should mention that you can't keep building the cabin higher without getting badly bit after a while. Every time you raise the cabin roof you need to raise the cockpit seats so the skipper can see ahead. Most of us can see over a 3' high cabin if we sit just above the floor. So if you can sit up in the cabin, as you can with AF2, you can steer from the cockpit sitting on a low seat. If you raise the roof to 4' cabin depth, the skipper will need to sit a least 1' above the cockpit floor. On a small boat the crew's weight is so significant to the total that elevating the crew weight will require adding ballast down low to compensate. Total boat weight suddenly goes up. So adding much more cabin depth to AF2 will probably increase the 600 pound empty weight to 800 or 1000 pounds in a quantum jump. And you'd get a totally different boat. 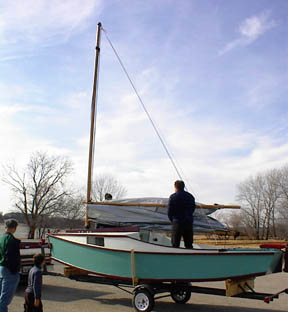 As it is, AF2 is unballasted and paper studies have shown it will probably sail best at about 20 degrees of heel and will probably capsize at about 50 degrees. Once capsized it should float high on its side, as does the similar but smaller AF3, and take on a few gallons of water into its non-draining cockpit. The AF3 rights quickly with crew weight on the leeboard and AF2 should be similar because the cabin provides buoyancy up high, but lots of boats the size of AF2 won't right that way, the Lightening, Flying Scott and Hobie 16 coming to mind. So there is really nothing sure about self rescue in an unballasted boat, especially in the bad conditions that cause capsize in the first place. One other thing is for sure: once he rights the boat the skipper will need a step or rope of sorts to get back into the boat.

AF2's sail rig is a 114 square foot gaff chosen to avoid a really tall mast. I think it looks pretty traditional too. There is more of a learning curve involved with the gaff than with the sharpie sprit and it takes longer to rig. Richard is experimenting with a polytarp sail, although it's not clear yet if polytarp is suitable for a boat of this weight.

The boat uses simple nail and glue construction with no jigs or lofting. You can see some interesting assembly photos at Rich's site. The plywood bill looks like six sheets of 1/4", seven sheets of 3/8", and one sheet of 1/2". One might think that AF2 is just a notch larger than AF3 but you see she needs about twice the material and labor. 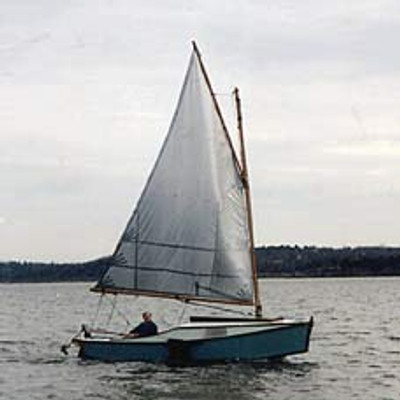