SKU:
JM-WEEVEE
Availability:
not available at will call
measurement:
imperial

I think I built WeeVee in 1993. I still have the original.

I had done several flat bottomed and multichined boats by the time I was thinking of WeeVee and wanted some first hand experience with a V bottom. I decided to go with a small dink although I'm pretty sure that experiences gained from a tiny boat might not apply to larger boats. I kept the length to 7-1/2' so it would fit on one length of plywood. I kept the beam at 3-1/2' which had worked so well with some previous designs. In order to get any sort of volume of displacement I had to make the V quite deep as you see in the lines. 9" deep, in fact. I had been used to sailing and rowing boats with 3" or 4" of draft where I could usually drive the boat onto the beach and step ashore with dry feet or at worst step into ankle deep water.

But the lines show an advantage to the V bottom. With WeeVee I made the V deep enough that the chines were kept above the water in any normal loading. I thought that would give very good water flow over the bottom. If the boat is kept from side slipping, the flow lines should never pass over any seams, just from bow to stern over the smooth gentle curve of the bottom panels. I also think there is an advantage in water flow even when heeled in sailing. The V boat will sail with just one chine in the water where a flattie will sail with two (until it heels enough to fly a chine) and hard chines in the flow usually stir up a fuss. That's why I think shallow V sailboats like Y Fliers and Lightnings seem to sail so much better than dead flat boats.

WeeVee was a taped seam project from 1/4" plywood. She has no internal structure at all - no ribs or longitudinal stiffeners or keelson. The arcs in the plywood stiffen the panels.

Although the panels have no stiffeners, they are fastened to a stiff top perimeter. The basis of the stiff perimeter is a wide wale, 3 plies of 3/4" lumber as shown below. The trick of it is to make the outermost ply wide and in effect making a channel or I beam situation of the wale. Most traditional wales would have the wide ply against the skin for looks, but here the wide ply is outside for stiffness. I call this the "Carnell Flange" because Dave Carnell kept after me until I used it. The ends of the hull are plated with 3/4' lumber across the wales tying the whole structure together. The system was a total success even though the stripped boat weighs about 45 pounds!

The actual building of WeeVee involved 5 mm lauan underlayment from the lumberyard, seams filleted with automotive Bondo and taped with polyester resin. Then the lumber parts were glued with Weldwood powdered glue. None of these things are supposed to work but WeeVee is still in the shed 5 years later with no repairs and no sign of needing any. Indoor storage surely makes a difference. I really never know what to tell people about materials because of the varied successes and failures that happen. The only thing I can say is that if I start reading somewhere that only one material or method works, I stop reading.

I had the Moby gaff rig in the shed so designing it into WeeVee was pretty easy. I used my usual pivoting leeboard, easily adapted here because the boat had vertical sides and needed only a minimal lower guard. For the top guard I took advantage of the wide Carnell flange wale and simply added one more lumber ply in the area of the leeboard and sawed a slot through the flange.

There were two experiments in the rig for me. One was the use of lashings to secure the mast at the partner. So instead of building up the mast partner board to sufficient width to allow a full hole for the mast, there is just a half width slot for the mast with two 1" diameter pegs right in front of the slot. The idea is to push the mast into the slot and secure it with a rope that belays around and around the pegs and the mast. So there are no metal fittings. I had seen the system work well on Marc Smith's Birdwatcher.

Second, I used a shallow wide rudder of the sort that was becoming common. It had an endplate. The rudder was hung with rope hinges instead of metal ones. The ropes were secured to the inside of the hull, passed through holes in the stern (the lower rope was fastened to the skeg) and then through holes in the front edge of the rudder. They eventually passed out through the rudder sides to cleats. It fastened on pretty quickly. 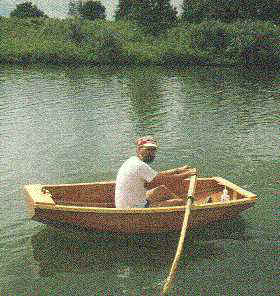 I took WeeVee out on a windy spring day but was careful to keep it in very sheltered water. The first thing I saw was that the deep V made her hard to get into, at least from a beach. She had to be walked out into 9" deep water before boarding. Usually with a flat bottomed boat you can find a way to get going without getting your feet wet. Later I found that by tilting the boat over about 20 degrees one way or the other you can make it sort of flat bottomed for a while for getting closer to the beach. But if you look at the photo of the boat above you will see there is almost no freeboard in the stern corner when thus tilted and I have to be careful while doing the tilt.

While rowing, with my weight secure in the center, the boat has fine stability. As for a seat, I use a loose board that wedges itself in place from my weight. In fact the usual loose board is the leeboard which would not be used while rowing. Eventually I cut out another loose plywood board that was only used as a seat. You don't want to stand up in a craft like this.

WeeVee is very fast under oars for her length. She'll go 4 mph with good effort in good conditions, about what I'd expect from a 12 foot rowing boat. A case could be made for WeeVee as an exercise boat because she is smooth and fast enough to be interesting and yet is very cheap and takes up so little space. I found there were many small lakes, say a mile or two long but narrow, where the boat was ideal. At 45 pounds it is easy to carry it on a shoulder from the parking lot to the dock and plop it into the water. At a dock the boarding problems that occur while beaching are not problems. Then I can cover the whole lake in an hour.

The boat is actually OK in rough water. It sort of hops over waves. But keep in mind the low freeboard and total lack of flotation. Swamping it means going for a swim with no chance of self rescue.

And WeeVee could hold both me and my wife, say 280 pounds of people. Freeboard or rowing effort were not problems once underway. But getting two folks arranged is more than twice the challenge of one. When the passenger sits in the stern before the skipper, the bow cocks up way high! We were careful and it never took water over the stern.

I just thought of one more small experiment. Instead of buying rowlock sockets, I took advantage of the wide flat wale to make my own and shown below. Essentially they are 1/8" thick aluminum plates bolted top and bottom to the wale. A hole is then drilled for a standard rowlock. The aluminum I used was simply that of a standard aluminum yardstick, about $3 at the lumberyard, the kind meant for drywall work but very handy for everything. These sockets have worked very well with almost no wear. A bit of grease helps, of course. Phil Bolger had done the same thing with one of his fancy rowing boats only he used stainless plates.

Boy, what can I say!

The mast lashing partner was marginal. It worked well on Birdwatcher and my own Pencilbox design because the step and partner are well apart. But on WeeVee the partner is maybe 10" above the step so the loads there can get quite high because the "couple" is so short. The rope lashings were always strong enough but getting all the slack out of the ropes is about impossible and any small amount of slack in the closely spaced supports made for big defections of the mast. It was always a struggle and I never tried it again.

For essentially the same reason the rope lashings of the rudder were not a success. Now matter how tight the lashings were at the start, after a bit of a sail they loosened and the rudder got floppy.

And this boat pretty well taught me to not use a gaff sail on a cartopper. It takes a while to rig everything, although once rigged you have great control with a rope at each corner. Repeatable simplicity is so important on a small boat. Quick rigging will mean the boat gets used a lot more. And on a boat so small that your weight placement controls the boat, the idea of going forward to tweak the rig is silly.

The deep V made the boat hard to sit it while sailing. My butt always slid to the middle which is always where the deepest puddle was. Eventually I used my new rowing seat board closer to the stern. I'd sit there with my butt to one side and my feet forward in the deep V. Upon tacking, I'd slide my butt to the other side. All this had to be done smoothly and well timed because the V made the boat quite a balancing act under sail.

I've mentioned the problems with the rope hinges in the rudder, but there was another problem. The original shallow broad rudder worked fine close hauled or on a reach, but on a brisk downwind it couldn't hold the boat. She would spin around into the wind. I took to "tacking" downwind and avoided straight downwind runs. I tried wider endplates and an endplate on top of the blade because it was plain to see that water was swirling over the top of the rudder. I gave up on that rudder and made a deep plywood drop rudder like I normally use and hung it with metal fittings. Great improvement! Full control under all conditions.

Well, I can't help but think that WeeVee was not suitable for sailing by anyone except the skateboard crowd. After the first year I parked the sail rig and it has stayed parked. 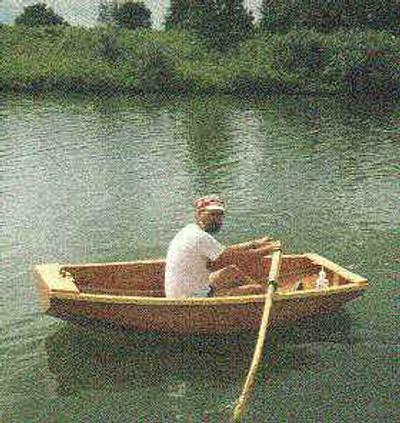