SKU:
JM-TWANG
Availability:
not available at will call
measurement:
imperial

Twang is a light small power skiff, light enough to cartop (I notice the wheels on the transom in the photo) if you keep your mind on weight as you build and if you can figure out a way to carry your motor and fuel without ruining your car. It would also be well suited to someone who wants to carry his boat in the back of a pickup truck. Luke Spreadborough built this prototype down in Queensland. (Looks like big registration numbers are all the rage in Australia.)

I've never seen a hull shaped like this before although I'm sure it has been done. Look closely at the lines and see that the bottom is straight for the last 10', and that she is totally flat bottomed for the last 7'. That gives the small boat better capacity and I'm thinking the ability to plane with a small motor, say with 5hp with a light skipper. That is about like my little jonboat design, Jon Jr. But this bow is pointed and designed to meet a wave with a deep V shape and hopefully be softer riding than the totally flat bottomed jonboat or flatiron skiff. There is bound to be turbulence where the deep V meets the flat bottom but I'm hoping it won't be a factor on plane since only the aft half of the hull will be in the water then. Here is a photo of Luke's bow when it was still in the "wired" stage prior to having its seams taped: 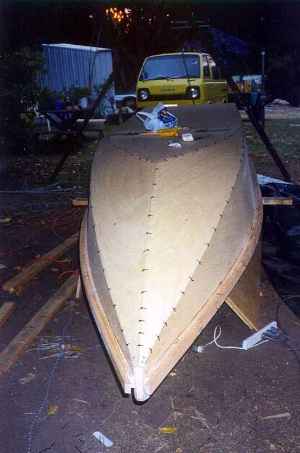 Luke ran the boat with several motors. Here it is with a 2.5hp (I think). Don't stand up in a boat like this in real life (I think gravity works the other way in Australia and you can't fall "down"). 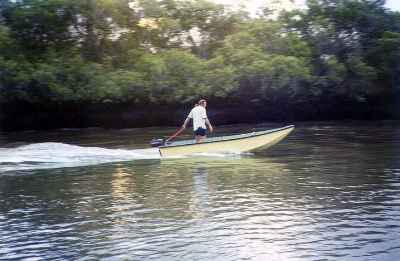 Luke also tried Twang with a 5hp (I think) sitting forward and this looks to me like the way to go: 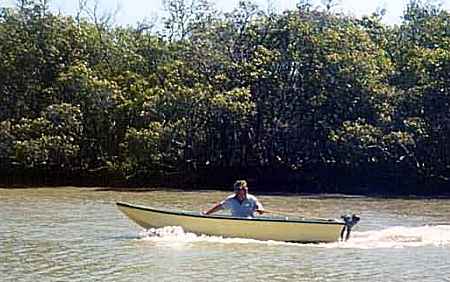 In my opinion these little power boats aren't safe with big motors. I'm suggesting no more than 5hp. And Twang would max out with two adults. Another factor with small boats is that by nature they aren't as seaworthy as larger boats. So I'm still not sure if the V bow in Twang is a success. But you would think it has got to be better in rough water than a flat bow. For some boaters who don't want big power or don't often take folks along with them Twang might fill the bill. 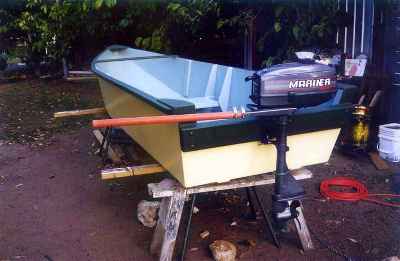 Twang is made from four sheets of 1/4' plywood with taped seams. 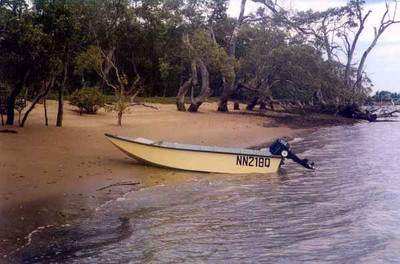