Sow's Ear is somewhere between a shantyboat like my Shanteuse and a cuddy power skiff like AF4. It has a lot more room in the cabin than does AF4 but a lot less than Shanteuse. And it has an open cockpit that will seat two or three adults in comfort unlike Shanteuse. Sow's Ear should be a bit more seaworthy than Shanteuse but keep in mind that no light and small flat bottomed boat is going to be seaworthy to any real degree. And it looks a bit more like a boat than does Shanteuse. As for looks, it follows closely on the heels of Bolger's Micro where the looks are the result of high volume and ease of building. Sow's ear will be a lot easier to build than Micro because powerboats have a lot fewer parts than do sailboats (assuming you are not going to build your own motor).

And using a powerboat is a lot easier than using a sailboat, assuming you have a motor that is reliable. I think the irony of most modern sailboats is that no one will use one without a reliable motor, so they are really motor sailers. There is no question that a good motor makes the whole sailing operation in boats too large to manhandle a lot easier while you still have the option of smooth and quiet sailing. The cost involved is that the sail rig of any boat usually doubles the labor and materials needed and the setup time at the waterfront of the trailer sailer is often an hour instead of five minutes. So you see the advantages of a straight powerboat. I tried hard to make this one very easy to use, especially for a typical family. It will float in about 3" of water so launching and beaching is a breeze. The bow has a step through transom and you will need to step up 20" to get aboard and into the cabin, easy enough for a child or anyone with both hands full of gear. The main cabin room is 6.5' long and 6' wide and will sleep two adults. Atop the cabin is a slot top full length which you can cover with simple fabric. Behind that room is a storage/utiltiy area where you can store al of your gear and clothes, cook and keep a portable toilet. Aft of that is the cockpit, 5' long and 6' wide, large enough for lounging in a beach chair or keeping a short stack of those plastic lawn chairs. The sides are deep and secure for children. And in the stern is a full width self draining motor well. To steer the boat you will need to stand or sit on a tall chair to see over the cabin. Remote motor controls will be best but a long tiller extension to the motor will work well too. That is what I use with my AF4.

The Coast Guard would advise no more than 25 hp on Sow's Ear, based on length, width, and the fact that it has a hard chine. It would take that much power to plane the boat at 2/3 throttle with some adults aboard, weight being all important. But this boat won't do well in big open waters that can get rough. It will do very well with say 5 hp in protected smaller waters where planing and distance covered are not important.

Construction is simple nail and glue. Sow's Ear needs seven sheets of 1/4" plywood and four sheets of 1/2" plywood. That is more than the longer AF4 but this boat has a lot more interior volume.

Sowsear was presented as a prototype design in a recent issue of my newsletter, but I knew a prototype had been built a couple of years back. Then I got a set of photos and a full report from Erwin Roux about the prototype directly afterward and I present it pretty much as he wrote it: 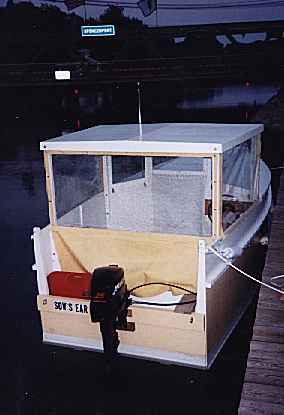 Sowsear was my seventh boat so it went together pretty quickly. It took me about two weeks of evenings to get it to the stage in the photo where the hull is overturned and the bottom is glassed and painted. After that I had less time available and it took another two months to complete. Only two glitches occurred during the assembly. On sheet 2 of the blueprints the bow transom reads 9" and it is really 12". I should have used my scale instead of using what is written. The other thing was that I built the stern transom to short shaft dimensions and later found a good deal on a long shaft motor. Both problems were easily remedied. The boat was built using AC exterior Douglas Fir from Home Depot, epoxy for all joints, and was painted with latex paint. It has held up well with just a tarp over it. 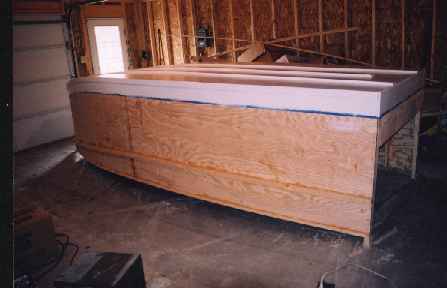 The PA Fish and Boat Commission rated it at 65 HP and five person capacity. I put a 25 hp on it with remote controls and that is plenty. The boat planes at about 2/3 throttle as I recall is traveling in the upper teens for mph on the gps. I have run it at full throttle a few times but don't know top speed. I am not comfortable at all running the boat up on plane. I used a lot of epoxy and screws in assembly so I know it will hold up, but the drumming noise on the big flat bottom makes me anxious and that's not why I'm in a boat so I usually run at far lesser speeds. Seven to ten mph seems good to me. At that speed with two adults on board the boat trims better if one person heads up front. When encountering another boat's wake it is best to throttle way down and turn the side toward the wake and endure the rocking. Otherwise you'll get a nice big splash of water over the bow. This boat requires a lot of attention to the helm when the wind picks up, it gets blown all over which can make it tricky maneuvering into a canal lock. I once had it out in a dammed portion of the Susquehanna River here in Pennsylvania when the wind really picked up. Whitecaps formed and I had to quarter to the waves, which I would estimate at one foot, all the way back to the boat ramp. It was not a situation I want to be in again. The local Fish and Boat Commission patrol boat passed me on the way and they didn't seem too concerned so I guess I looked safe enough, but it certainly wasn't fun. 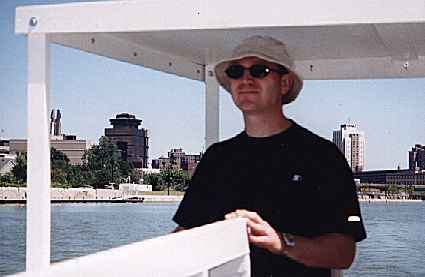 Sowsear is, of course, at its best when used for camping. It makes a good camper on the trailer at a campsite, although climbing in and out is tricky. I've had it on four trips of three or four days on the Erie Canal in New York. The photos show three different summers. The first summer I went by myself and just threw a tarp overthe top to camp. You can see it is very bare bones in the first photos. The next year I put running lights on, and made a cockpit softtop out of polytarp and poles. This didn't work so well so in the third year I made a hardtop with which I am very satisfied. It also fits nicely lowered down over that big cockpit and keeps the rain out when trailering and storing. On the last trip I added the side curtains and windows so it can be run in the rain. Although I have been using a polytarp cover for the walkway hatch I intend to make some sort of segmented hardtop for the walkway and doors for the bow and cockpit access. Although the bow of Sowsear is good for a beach landing, the boat is tricky to get in and out of when tied to a dock, which is basically all you do on the canal. 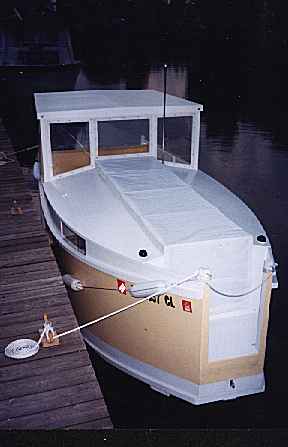 My son Noah, ages 5 and 6 in the photos, loves the boat. Plenty of room for lounging at his age. My nephew Kevin, also pictured at age 16, has been coming along. They slept in the cabin on air mattresses: I slept in the cockpit on a beach chair laid flat which fits from corner to corner. On my last trip my wife, son and 3 year old daughter came and we all comfortably coexisted although we heard lots of comments like "They've got two little kids in that boat, can you believe it?" We didn't get a single photo on that last trip, although enjoyable, much of it was gloomy weather and we were occupied with the kids. 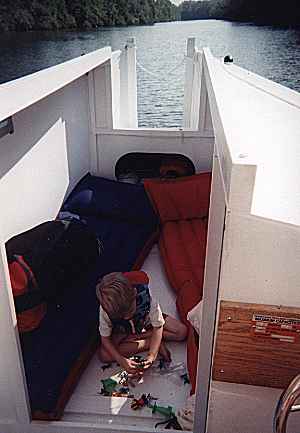 Sowsear elicits either delight or derision from people who see it. Teenagers tend to point and laugh, I once got a lot of hoots and stares when I drove it down to a launch area with a lot of sparkly bass boats heading out for a tournament, and my father-in-law thinks it is the ugliest boat he has ever seen. But the vast majority of people love this boat. It is almost impossible to get in or out of a parking lot without someone asking about it. I once stopped at a scenic waterfall along the Finger Lakes and a guy who was there to renew his wedding vows came running over in his tuxedo to see it. One guy saw me from a bridge over a river and drove down to the launch area to wait for me to come in. You'll have company for hours if you decide to park it in a campsite somewhere. All along the Erie Canal people wave and smile. Docked at a canal port lots of folks will stop to ask questions. One canal worker told me people all along the canal were talking about my boat. I've always told people that you are the designer, although I am embarrased to say I just discovered I have been mispronouncing your name. 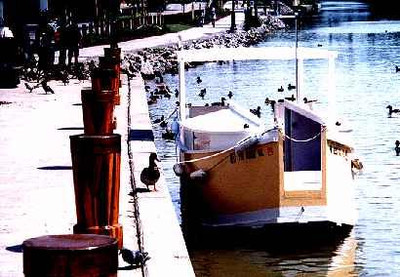