SKU:
JM-RIVERRUNNER
Availability:
not available at will call
measurement:
imperial

This was a custom project for a man who wanted a Lowe Paddlejon boat but found they were quite rare, essentially a custom order. The idea of a boat like this is to float mild rivers with a guide in the stern directing with a paddle and a passenger or two up front fishing. You might recall the design I did last year called Ozarkian which is very similar, maybe the father or grandfather of the Lowe design. (I suspect southern Missouri is sort of jonboat heaven, the source of most of them both in spirit and in material. I recall driving the interstate down to Springfield, Mo. about ten years ago and near Lebanon, Mo I passed what seemed to be miles of aluminum jonboats and pontoon boats stored in fields along the highway. Even little children there must know how to weld aluminum.) 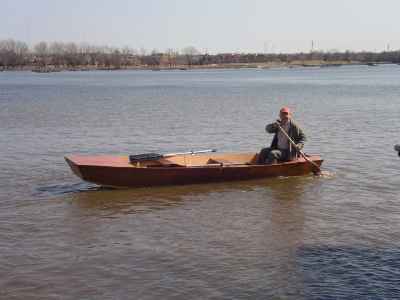 He sent me some photos of a paddlejon he had seen recently and a sales brochure. I tried to copy the lines, thinking all the time that these boats are a lot more subtle than you might think. At the time I had no real Lowe around to study but the brochure left me with the impression that the paddlejon was perhaps a regular small power jon made long and double ended with swept up lines both fore and aft to allow easier paddling. But it is not quite a true double ender in that the stern transom is raked for the usual 15 degree motor mount. As far as power goes, a boat like this won't plane nicely at all, trying to stand on its stern at the least excuse, so I say 3 hp max. 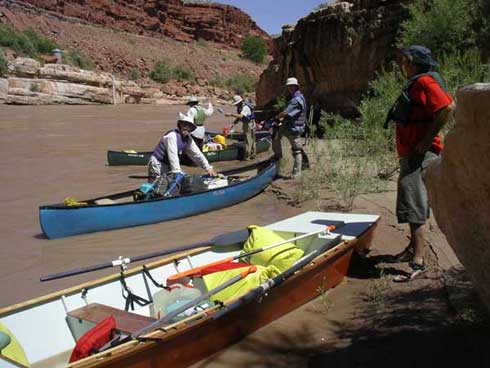 Getting back to the lines, I had the feeling that these are made from a constant width piece of aluminum, say 32" wide on the bottom and 16" wide for each side for a total panel width of about 64". Stiffening wales are already pressed into the panel. The flat wide panels are folded with a brake such that the proper flare of the sides is established. The end chines are notched and the end bottoms drawn up and the end sides are drawn in to close the notches which are then welded shut. But the chines for the main portion of the hull are not welded at all, just bent. There seems to be another trick in that the top of the sides bends inward a lot sooner than does the bottom of the sides, resulting in a rolling flare that gives the boat a somewhat elegant shape (I think). So you might think a manufactured jonboat is a dumb and brutish thing, but I'm quite certain most of them are actually pretty clever. 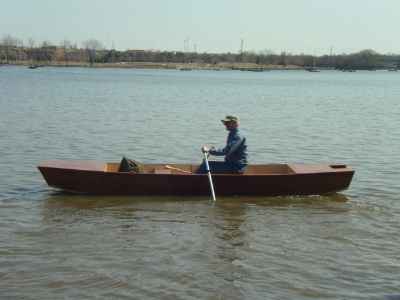 Jim Hauer built the prototype in Green Bay and sent these photos. I think it came out exactly as hoped. Remember, this is not really a rowing boat as much as a floating boat so the face forward rowing will be used more to steer than to propel. The photo of the man paddling in the stern shows that the aft transom is still up giving good flow lines there, unlike a square stern power jonboat. Under power Jim said that 2.5 hp is about all you can take, the boat not behaving well above that.

Anyway, River Runner uses five sheets of 1/4" plywood. The idea of the light ply is to keep the boat light enough to manhandle into a truck or onto a car roof but it will take a diligent builder to keep it light. I suspect the aluminum original would be no heavier. Simple nail and glue construction. 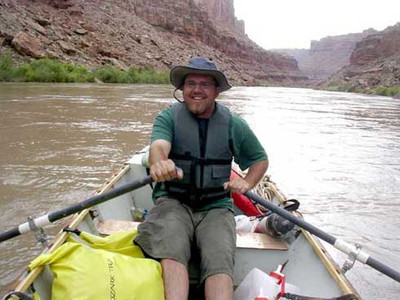