SKU:
JM-MAYFLY12
Availability:
not available at will call
measurement:
imperial

Mayfly12 is a small general purpose row/sail skiff based on the lines of the traditional flat iron skiffs of 100 years ago. By that I mean she has a nearly vertical stem, flaring sides from the midsection to the stern, and a raking stern. And she has quite a bit of rocker as did the originals. Mayfly12 is made from two sheets of 1/4" plywood and two sheets of 3/8" plywood. The heavier plywood is used to make a stiff bottom although one might save 20 pounds by using 1/4" plywood all over. I think the popularity of 12' skiffs is that they are usually all that one can cartop solo. Beyond that size and you should use a trailer. Once you have decided to get a trailer you might as well go to a 16' boat which is usually the most boat one can manhandle solo in the water. Sailboats larger than 16' are getting out of the "impulse" category and you should do some serious thinking before building one. Lightweight and simple boats like canoes and rowboats can be cartopped successfully at almost any length provided they weigh less than 100 pounds.(Mayfly12 is essentially the boat that was discussed in the "figuring displacement" essay except I have trouble getting Hullforms to do the stem and stern rakes.) 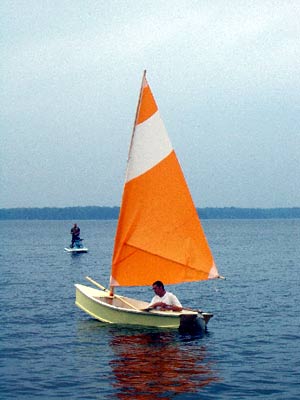 Here is the prototype boat by Mike Cerio in New York. There were at least two other Mayfly12's built but I did not get this short of photo so kept carrying the boat as a prototype. One of those boats was built with a daggerboard in lieu of the leeboard and it sailed quite well. This might have been Mike's first boat, certainly not his last:

I've kept the sharpie sprit sail that might have been found on a traditional skiff 100 years ago. It requires no store bought fittings to work well and its simplicity means it will work well most of the time. Its only real drawback is the 16' mast it requires. Unlike the traditional boats, I have used my favorite pivoting leeboard and kickup rudder so you can sail in shallows with no fear. And this boat has buoyancy/storage boxes fore and aft to allow self rescue of a capsized boat. By the way, to reboard a boat like this after capsize you usually need to scoop some water out of the cockpit before trying to climb back into the boat, and you usually must reboard over the stern. These boats are often too light to accept the weight of a man trying to climb over the side without capsizing again. The bailing is needed to rid the boat of water sloshing from side to side causing an uncontrolled roll that might lead to another capsize.

No jigs or lofting required. Uses old style glue and nail construction for the most part, but has taped seams on the side/bottom joint. 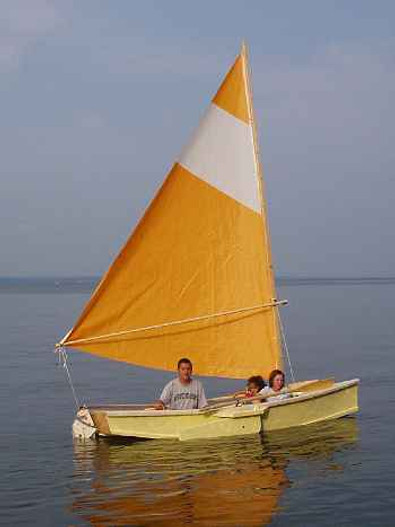