This story of Andalusia is not a how-to-build story in the usual sense. I am not going to tell you hovi to bruise your nearest thumb with the nearest hammer. Rather, this is a story for those who believe in the importance of noodling a new thing just for the excitement of it.

It is always refreshing to conjure something new in boats, especially if the ship is a departure from the ordinary and is based on sound practice.

Andalusia is small as yachts go. Just 34 feet overall, a shade over 30 feet on her water line. She has 9-foot, 4-inch beam and her draft is 34 inches. She weighs 11.318 pounds as drawn, so her displacement is on the medium-heavy side.

She is novel in that she is designed for a real need. We've had designs of V-bottomed pointed house trailers which are fine for southern service. They'll float on a morning dew, go to leeward like a paper bag in any kind of breeze, will slam in any sea. and will roll your neck until your teeth ache because they have excessive beam—said beam following every uplift and heave, jerkily, because the boat is so wide it has to do this.

the northern scene—the waters of Maine, of Georgian Bay, of the Great Lakes and Puget Sound. Here it is often rainy, always windy, frequently cold. Sharpened house trailers with accent on chrome, and mahogany are sucker bait in waters like these. So I have made Andalusia in reduced image of the little Caroo motorships a person sees sagging past the green coasts, alabaster houses and red-tiled roofs of Andalusia, hence her name.

I suppose you'd call her a tug- type yacht. She will have some of the wonderful, weighty forereaching ability of the tug hull, and she does havq a tug-type fantail stern. On second thought, I wouldn’t call her—just go on betting on her and you can count on her to take care of you and your family on any dark night, no matter what the welter of weather outside the cabin.

You may not like the layout. Okay—sketch in your own. This hull will handle about any arrangement you want. She can carry several more tons than I show, and will never feel it. My main idea in designing her was to get away from trying to pack a 5-room apartment into an 18-foot cheese carton.

For instance, you may want more aft deck, and may not like the aft cabin. All right—just run the cabin bulkhead down to the level of the main clamp, deck her cockpit over and use the aft quarters under the cockpit sole for storage.

It is my reasoned prediction that Andalusia will appeal in direct proportion to the amount of real cruising experience you’ve had. The man buying his first “cruiser” is often looking for the Fountain of Youth: He must cover 500 miles the first afternoon, he must sleep 60 people in his 15-footer, and reckon not the cost of speed, little realizing that his pocketbook must be sublimated in some way to an oil refinery where fuel grows on bushes. Your seasoned man knows his-craft must be big enough not to wallow if she’s going to have comfort, and that the fewer you sleep, the better. Two or three will be plenty. And speed? Keep it low!

Any 9- or 10-mile craft can comfortably do 100 miles a day if you know when to start out and when to pull into harbor.

Let’s look at the layout, and describe it: basically it is the layout of the usual cruising boat just turned around. Instead of narrow bunks forward, followed by a cramped galley, opening into a saloon, or deckhouse, followed by a cockpit, I have reversed the usual. In so doing we gain much.

Forward in Andalusia is the head, or toilet. This narrow, cussed, and infrequently used chunk of equipment demands only that portion of floor space due it. Privacy is gained by the companion doors which close off the main deckhouse.

By disposing of the head quickly we get the rest of the ship to use for layout.
Have you ever noticed on real ships there is an engine room? A roomy place where machinery can be maintained? Most cruising men come by their love of the game through a secondary love of good engines, and like to keep their machine brass bright and squeegeed down with clean rags. Andalusia s engine is down forward in a space amply large to allow access all around. Machinery in such a place lasts longer, runs sweeter, is more reliable for the attention it thus gains.

Motor weight in this ship is only about 5 per cent of total displacement, therefore the positioning of the mill weight-wise is not critical. Andalusia, like many craft her size, ought to be ballasted to final trim anyway.

To the starboard side of the engine I had shown a workbench, a good one, with vise, metal top and all. Something that a good mechanic would need for effecting repairs or doing light ship’s carpenter work. Many a man has paid through the nose while cruising because he had no vise or set of tools aboard with which to do his own work. Conquering cotter pins is half the fun, boy!

To port of the engine is a copper wet well. By rigging a shower curtain which can be pulled around a ring when in use, and by running the warm water from the engine jacket through a shower head, one can take a comfortable bath. When not in use the curtain is brailed up, and one never would know the feature is there.

A V-pulley and detachable belt from the engine to a rubber impeller suction pump exhausts the soap drain of this wet well, dumping it overboard, of course.
The facility for bathing comfortably aboard is something rarely found in a vessel this size.

Now we go aft to the living section of the boat.

No more comfortable place on any ship can be found than the wheel-house. Here there is space, vision, control, least motion. I have made the central living quarters of Andalusia resemble the plain wheelhouse of a fair-sized tug boat. In addition, I have put the secondary heart of any ship—the galley—right in the main deckhouse abaft the conning and living quarters.

To keep the ship open, free, and hence give the feeling of space, you will find beneath the cabin sole a small cargo hold. This is for suitcases and small steamer trunks and personal gear. In the average cruiser such truck is simply brought aboard and thrown on the bunks and is henceforth everlastingly in the way. Not on this boat!

Also canned goods, 500 to 700 pounds of pig lead ballast battened down at the turn of the bilges where it should be. and much ship’s gear can be stowed here. Saves cutting the boat up with a lot of vertical closets that murder interior space.

The steering wheel will be abaft the forward bulkhead, and to port. This is nominated as an 18-inch wheel, with chain leads over a sprocket, running to airplane cable tiller rope. The tiller rope leads through appropriate sheaves to a full-sectored quadrant, or 360-de-gree wheel at the rudderhead. A wheel tiller, with tensioner, is least likely to get out of whack of anything I have used.

A curtain should be provided for the helmsman to screen his vision at night. To starboard is the companionway to the engine room.

Two good, fully man-sized transom berths next enclose the generous gas tanks. Small plywood flats are tossed in way of the swinging port windows in the middle section of the deckhouse. This method of airing, and on occasion entering, the wheelhouse is most practical. It looks awkward, but usage in the decked-over commercial boats of the Great Lakes has found the practice sound. So we’ll stick to it.

To starboard between the transom berth and the companionway is the galley sink. This sink is a double-barreled affair. I propose on ray Andalusia to make the top fold up over a basin just the size of the top. About 6 inches lower will be the metal drainboard, and in this drainboard will be the sink itself. The space between the top and the drainboard will be ventilated outboard. Thus, many times when the going outside is lively, your party will want a hot roll and coffee—a mug-up—but it will be impossible to do the dishes quickly. A built-in dish-stacker, is. I have found, a wonderful sweetener for ship-keeping. You can get meals under way, and do the china up when a quiet cove is reached.

Nothing makes a boat smell quicker than galley food fragments not under cover.

In the slant, or rake, between the cabin side and the companionway one might install a rod and gun locker. There is just about the right shape and room for it.

To port is the main galley or cooking department, with stove. Charcoal briquets for me! Hottest, cleanest, safest. The smoke pipe will be run up through the short stack which is at once a ventilator and an eliminator. A small cross-damper between the water traps will let cold air down, warm air out. In bad weather the wing dampers are flapped down and you are snug.

While on the subject of ventilation, the outboard profile and the deck beam plan show the ideal location for a cowl ship’s type ventilator.^ This can be turned, according to windage, to induct fresh air, or to exhaust foul air. This item is left “local option.” If you want it, I have shown a good shipshape place to in stall it. The thing should be ducted to the engine compartment, to the aft bunkhouse, and to the galley itself if you use it. Details can be worked out from the job.

To get back to stoves while we are in this portion of the arrangement plan: I mentioned my choice of charcoal fuel in a Shipmate type stove. Alcohol stoves have the advantage of being extinguishable by water, but they do stink. Alcohol sold for fuel has a chemical in it to discourage internal use; as a matter of fact, this chemical also discourages your using it to rub the hair on your chest so as to fluff up the nap. Lighted, it is putrid.
Kerosene is relatively safe.

In my opinion, gasoline stoves should not be used on closed cabin cruising boats. Too dangerous.

Propane is fine, and gives city gas convenience, BUT, it requires, both by law in most areas and by common sense in any place, leaded basins outboard the cabin for the bottles. These basins vent overside. Propane is heavier than air. Leakage may settle in the bilge, might cause an explosion that would render your planking like an exploded cigar. Coal is safe, but slow.

Fire-extinguishing equipment is a must, and carbon dioxide—CO:—is tops. Another must is a metal fire wall between galley and berth ends where the gas tanks are. Precaution is always cheaper than panic. 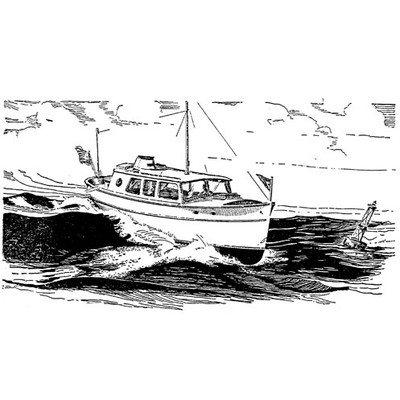